An enigmatic and elusive beauty, the island of Kea is but a stone’s throw from the metropolis of vibrant Athens. Undiscovered and picturesque with its colorful streets, pristine beaches, and archaeological sites of mighty empires past, Kea is an island that deserves your attention.

Hosting the largest oak forest in the Cyclades, Kea is a veritable garden of Eden with steep hills, olive groves, vineyards, and sweeping valleys. The opportunities for hiking are abundant and often end with the arrival at a secluded, wild beach. 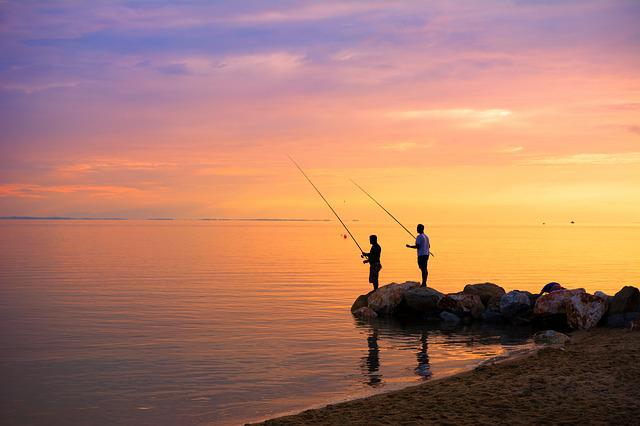 Fishing outside the main town of Kea - credits: pixabay.com

The coastline of Kea -also known as Tzia- is truly striking and rich in history. ‘Yachties’ know the area as a place that requires skill to sail in due to the changing winds and temperatures off the coast. Not only are the waters of Kea tantalizingly blue and sometimes tempestuous, but they also hold many a secret.

It is said that Greek ships sank there, in the bays of Kea, on their way back from Troy, and, in more recent history, the sister ship of the ill-fated Titanic, the Britannica, lies in Kea’s cerulean depths.

Kea is the first island of the Cyclades that you will meet while sailing the Aegean Sea from Athens. This charming island is just 90 minutes away from Athens, making it the perfect destination for a small getaway trip whenever you need to escape from the city's urban scene. With colorful houses and unspoiled natural beauty, Kea is the underdog that will turn your dream vacation into a reality!

The history of Kea island 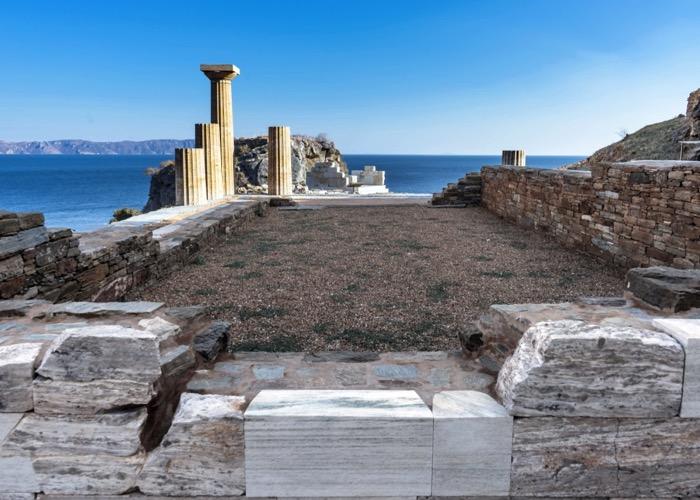 This small island has been interwoven with the capital city throughout history. During the Persian invasion and the battles of Salamis and Artemisium, Kea was one of the few islands to fight alongside Athens. Many centuries later, it would also be one of the first islands to participate in the Greek War of Independence.

Through a network of cobbled roads, you can hike to 3 city-states of ancient times, Karthaia, Koressia, and Poiessa, and witness the remnants of the ancients hidden amongst the undergrowth. Perhaps one of the most charming facts about Kea, however, is the myth of how the ancient stone-carved lion outside of Ioulida, the capital of Kea, came to be.

It was said that the Olympian Gods were incredibly jealous of the island's beauty, so they sent a fearsome lion to chase away the nymphs living in the island's cool springs. The inhabitants carved a lion statue out of a rock to appease the Gods.

However, this did not help, and the island became dry and barren. In their desperation, they built a temple to Zeus, who, being pleased with this, brought rain to the island that allowed the nymphs to return. Thus, the beauty of the island was restored!

Things to do in Kea: 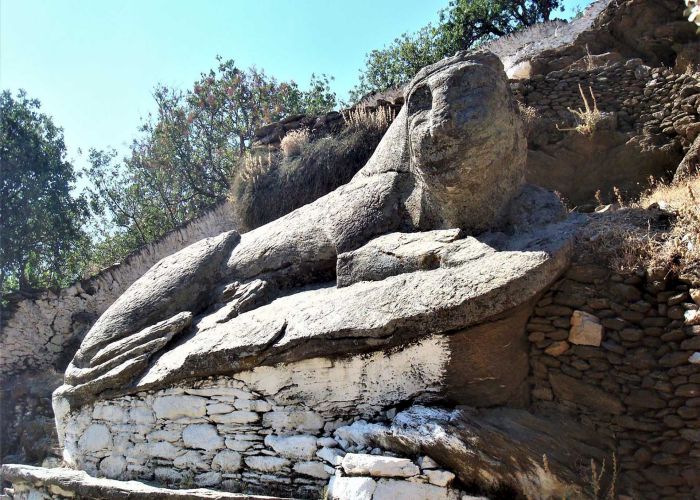 You can see the statue of the lion of the myth yourself, in Ioulida, as it still stands tall all these years.

This popular sight of Kea lies a little further up the road of the Spring of Kounderis, and it is said to date back to 600 BC. Pay attention to the mysterious smile on its face, which is fascinating to locals and visitors alike! 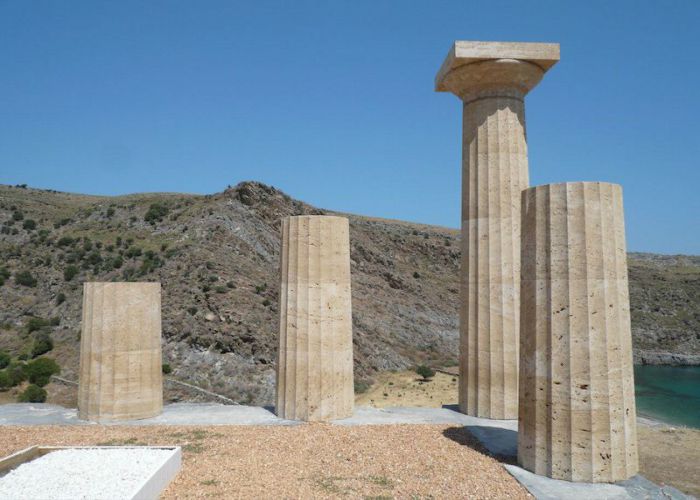 Ancient Karthea was one of Kea's four ancient cities, founded in archaic times and prospered. Karthea operated as an autonomous area with its own laws and rules, and its ancient acropolis contained public buildings, settlements, temples, a theatre, a cemetery, a water supply system, and strong towers to defend it.

Today, at the archaeological site of Karthea, you can find important monuments among ancient ruins like the temple of the goddess Athena, the archaic temple of Pythian Apollo, the temple of Demeter, the goddess of harvesting, and the theater dating back to the 1st century.

The ancient city of Karthea is accessible by sea or hiking, approximately an hour’s walk. Whichever way you choose, the view of the sea and natural scenery, in perfect harmony with the ancient ruins, will surely reward you.

At the Archaeological Museum of Kea, you will find exhibits from the temple of Athena, such as architectural members, sculptures, and inscriptions. 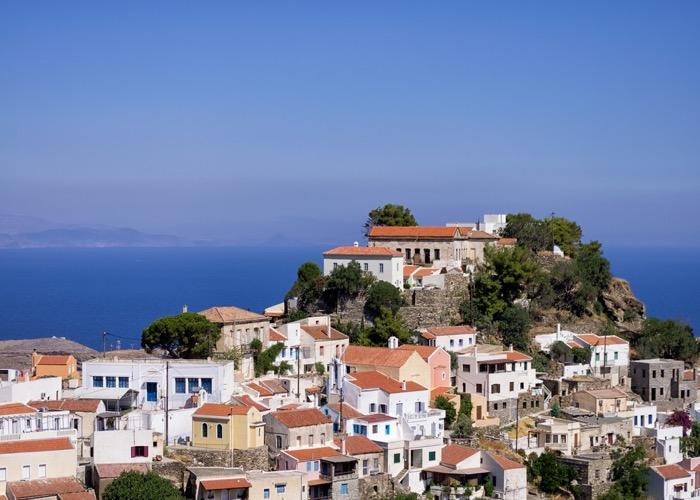 Hosting the largest oak forest in the Cyclades, Kea's island is a veritable Eden garden with steep hills, olive groves, vineyards, and sweeping valleys. The opportunities for hiking are abundant and often end with the arrival at a secluded, wild beach.

Soak up the sun on beautiful beaches of the Aegean sea 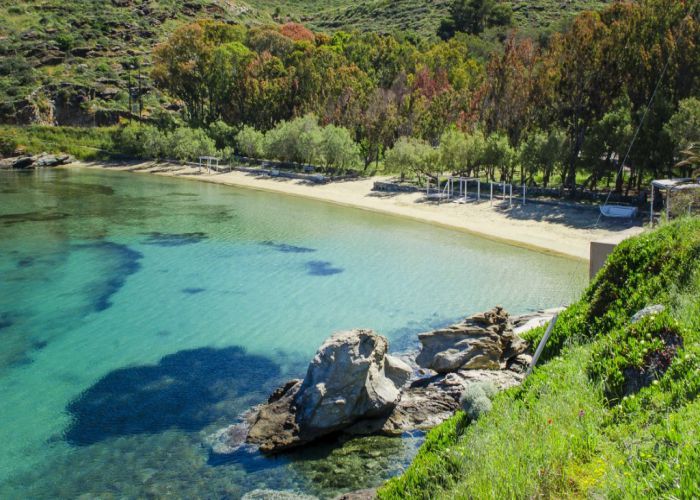 Speaking of beaches, If you dream of escaping the crowds and finding beaches of a wilder nature, Kea is the island for you. The majority of the beaches are small and secluded. However, there are some with amenities and varying facilities.

If you would like to be somewhere that is partly organized and offers some facilities to its visitors, the best beaches are Gialiskari, Koundouros, and Korissia. Whilst it can be busier on the weekends with Athenians escaping the city, it is usually very quiet during the week.

Gialiskari is particularly picturesque with its surrounding eucalyptus trees and crystal clear waters, and -if you’re an avid hiker- there is a 30-minute scenic trail down to the beach from Ioulida. 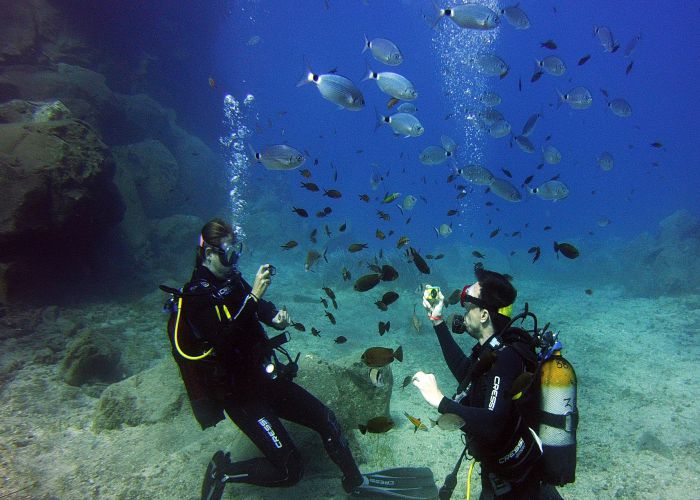 Yachties know the area as a place that requires skill to sail in due to the changing winds and temperatures off the coast. Not only are the waters of Kea tantalizingly blue and sometimes tempestuous, but they also hold many secrets.

It is said that Greek ships sank there, in the bays of Kea, on their way back from Troy, and, in more recent history, the sister ship of the ill-fated Titanic, the Britannica, lies in Kea’s cerulean depths.

If you are feeling adventurous, you can try scuba diving to see the sunken ship that lies at the bottom of the Agean for more than 100 years.

Feel like a local of the Greek islands in Keas’ villages 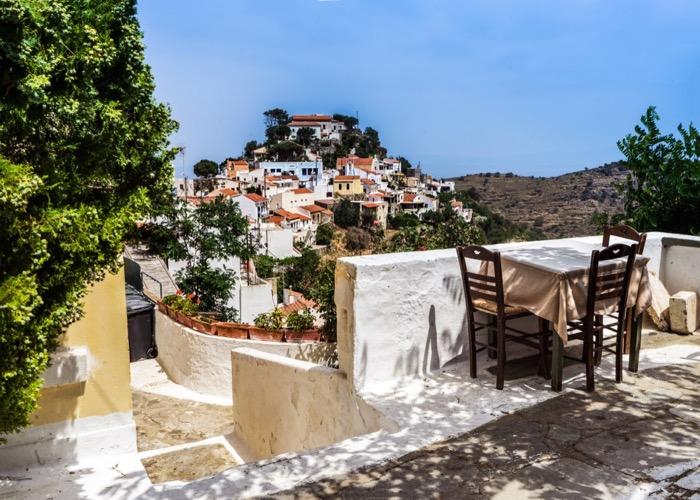 The small towns on Kea island are wonderfully untouched and very much reflect the original spirit of traditional island villages. Ioulida may be the capital, but with locals traveling only by donkey or foot, it is hardly more than a sleepy island seaside village.

There are also a number of interesting architectural and historical sites to see. From the remnants of Venetian walls to the cave church of Agia Paraskevi and, of course, the impressive medieval Kastro, one of the castles of Greece, there is much to marvel at.

If you’re after spectacular views, head to the monastery of Panagia Kastiani, which lies perched on top of an enormous rock and looks out across the sea.

The heart of this town, however, is undoubtedly the main square. Full of life -and the main site for any festival or celebration on the island- it is a wonderful place to go in the evening and enjoy a light breeze after a hot summer's day. 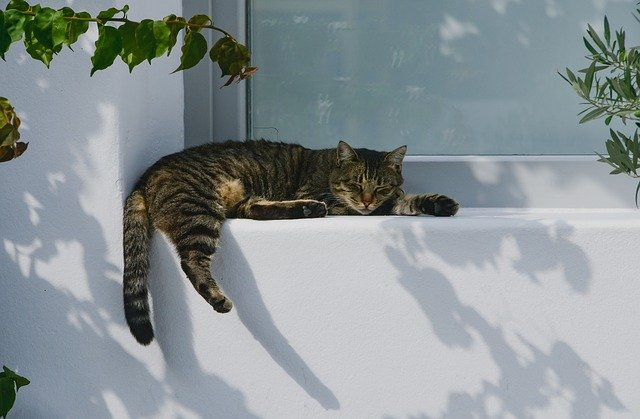 A typical setting on any Greek island - credits: pixabay.com

There are several festivals throughout the year, known as 'Panigiria,' but notably, a religious festival on August 15th, involving traditional music, copious amounts of fresh food, lots of dancing, and laughter into the early hours of the morning.

Another village to note is Vourkari, a small fishing port tucked into a sheltered bay. The port town has somewhat of a reputation for its good tavernas and, in particular, for its deliciously fresh seafood. With fish restaurants lining the harbor entrance, you will be utterly spoilt for choice!

Try the spaghetti with lobster flavored with wine, as well as other traditional Greek delicacies like this, whilst looking out across the bay. Pair your meal with a glass of Ouzo and you will feel immediately like a local.

If, after a scrumptious meal, you’d feel like walking, go for a stroll along the cobbled streets and admire the brightly colored houses for something to take home, check out some of the small art galleries offering beautiful Kea paintings. 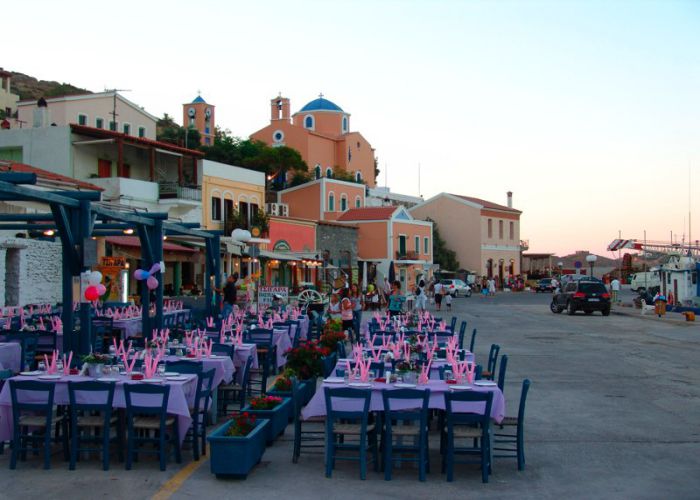 Kea might be the ideal destination for a relaxing and tranquil vacation, away from the buzz and extravagance of the other Cycladic islands, but that doesn’t mean that you won’t experience the world-famous Greek nightlife and entertainment.

In Vourkari and Yaliskari you will find plenty of bars for you to enjoy a drink or cocktail, or you can party till the sunrise in Korissia. 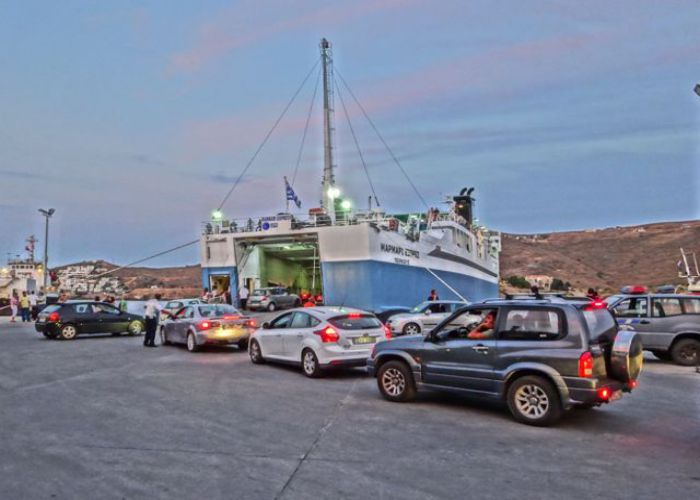 Ferries to Kea run from Lavrio port, situated at the southern tip of Attica. The journey is roughly 1,5 hours. You can reach Lavrio from Athens' city center either by taxi or by using the KTEL bus.

Alternatively, you can use a combination of public transport and a taxi, by taking the tram to Voula and then taking a 30-minute taxi ride to Lavrio. The main way to get around Kea if you are not coming by car is either with the public bus service or by taxi.

By far the most cost-effective, the bus routes start either in Ioulida or the port and usually coincide with ferry arrivals. From Ioulida in particular, buses are available to many different parts of Kea. Taxis are largely available from the port, although there are some operating at other points around the island.

However, the best way to see Kea is by renting either a car or a motorbike. This will give you the freedom to discover some of the quieter and more secluded spots on the island. 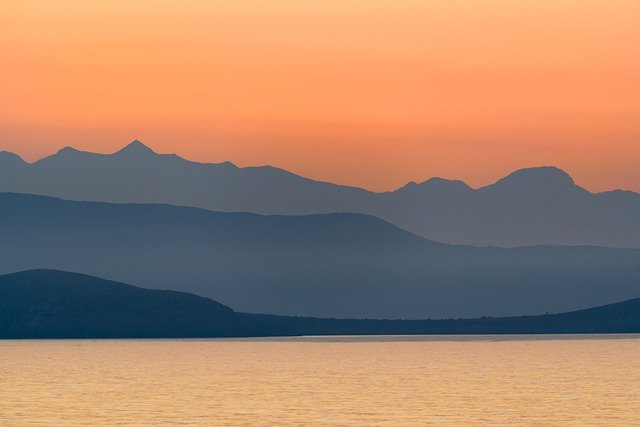 The Greek islands are uniquely beautiful, each possessing its own character and charm. Whether it’s Crete and its reputation for unbeatable food, Santorini with its breathtaking views, Kea for its wild sandy beaches and picture-perfect towns, or any other island destination close to Athens will blow your mind!

Check our Greek island tips and Greek Island Hopping guide as one thing we know for sure: there is a lifetime’s worth of islands to discover in Greece. What are you waiting for?

Share this:
More in this category: « 5 Islands Located Close to Athens || Top 10 Things to Do in Delphi »
back to top