When the temperature in Greece is low, and the mountains of central Greece are covered with fresh snow, it is time to put on your snowshoes and explore Arachova.

The small town (often considered a village) of Arachova is the gem of the southern slope of Mount Parnassus. Located in Boeotia county, at an altitude of 970m, it’s one of the most alluring places in mainland Greece, only 2 hours away from the Greek capital, making it the perfect getaway destination from Athens. 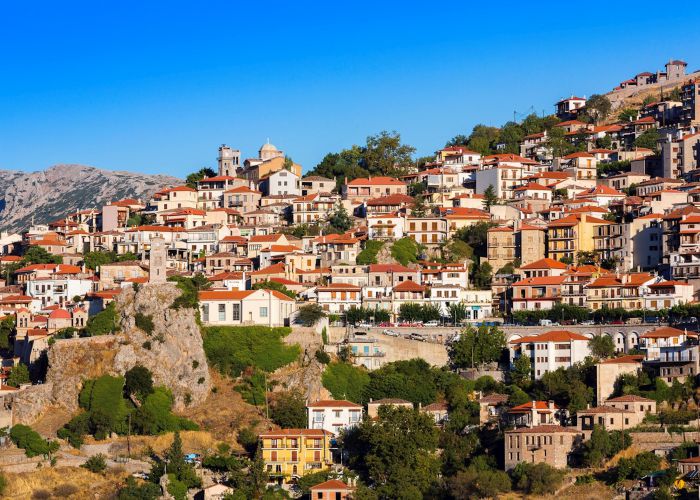 The picturesque landscape of Arachova and the rustic architecture combined with the town’s sophisticated character, make the ideal scenery for a perfect vacation. If you want to explore the winter side of Greece, Arachova won’t disappoint you!

The region’s history is long and fascinating. The oldest archaeological records are traced back to the Neolithic era at the Corycian Cave, which was later considered a place of worship for the god Pan and the Nymphs. 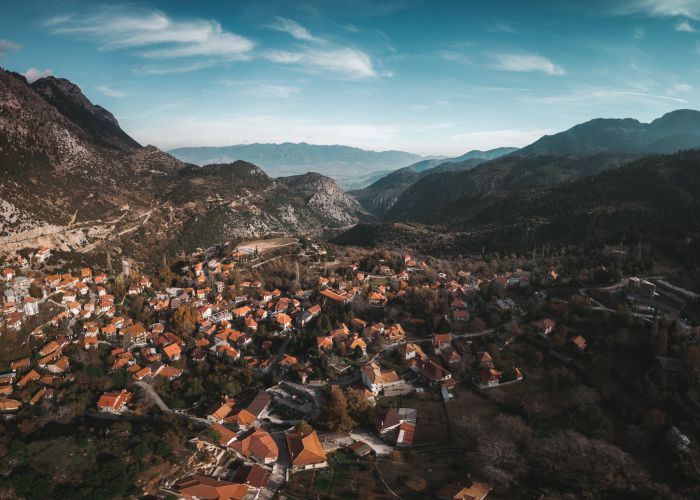 During antiquity, the famous sanctuary of Delphi stepped into the spotlight, while the region was inhabited by the Phocians, one of the many ancient Greek tribes. However, the actual town as we currently know it was built around 1300 in the late Middle Ages and the people of Arachova became significantly active during the Greek War of Independence against the Ottomans.

Today, with perfect winter weather and an average minimum temperature of 7.0°C (44.6°F) in December, Arachova is one of the most popular winter destinations in Greece characterized by the diversity of its travelers.

Its magical vibes, traditional guest houses, and fairytale aura will charm you right away and make you realize that Greece is way more than just its islands. Here are some of the best things to do in Arachova, Greece: 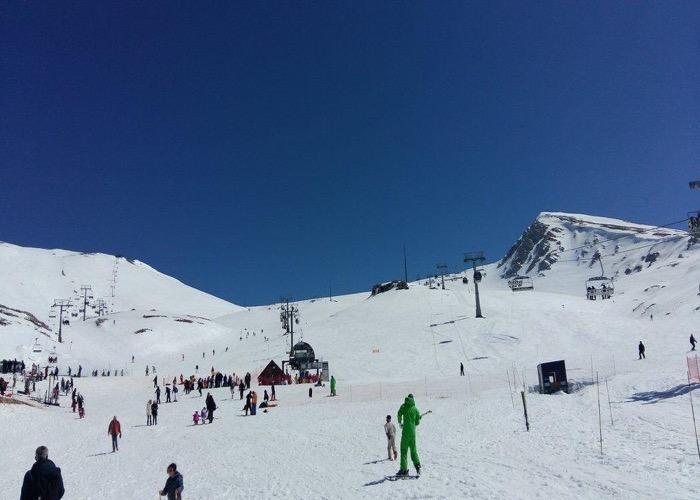 If you visit Arachova during winter, you should definitely go to the Parnassus Ski Center for skiing, which is actually the largest and most popular ski center in Greece.

Modern facilities, up-to-date equipment, and ski classes for everyone are some of the resort’s advantages that make it the perfect winter destination.

Whether you’re a winter sports enthusiast, a casual skier or even an amateur wanting to experience the ski resorts in Greece, a day trip to the Mount Parnassus ski resort is essential; you could always enjoy a cup of hot chocolate at the cafeteria while overlooking the mountains. Benefit from the snowy winter setting and hit the slopes of Arachova! 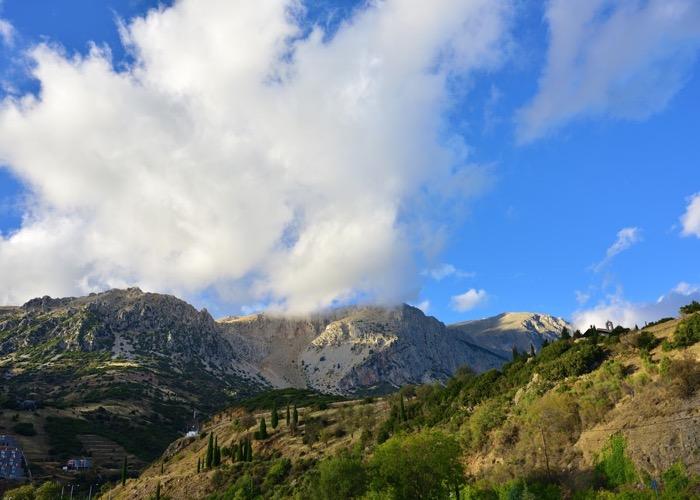 In case you’re not really into sports and weather permits, you could try hiking in Arachova. Mt Parnassos has many hiking trails, depending on your fitness level. A good option for your hiking experience would be the National Park of Parnassus, the second largest in the country. 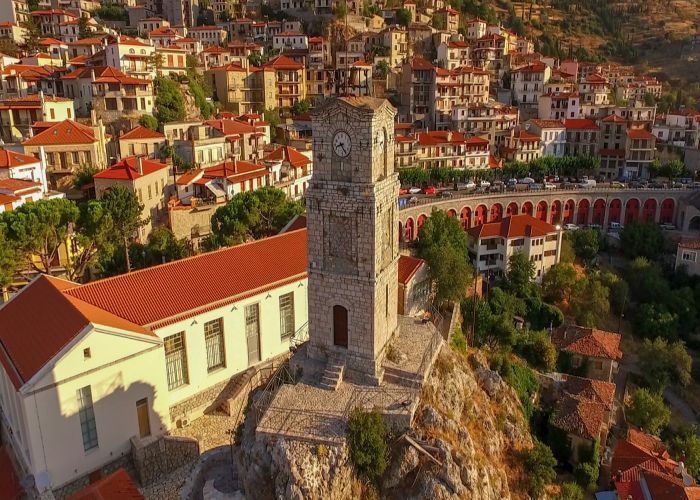 The scenery, as you can imagine, is breathtaking and intriguing for visitors.  Explore the mountain paths and keep your eyes peeled for potential wildlife encounters! You can even indulge in mountain bike activities should you wish to do so! 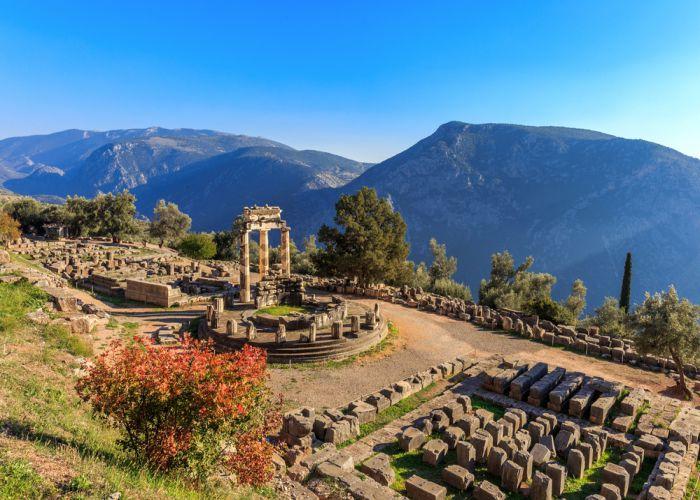 When it comes to ancient history and Greek archaeological sites, the sanctuary of Delphi is one of the must-sees, especially when you are visitors to Arachova or a nearby village. According to ancient Greeks, Delphi was the navel of the Earth; or in other words, the center of the world.

Therefore, its significance throughout antiquity was huge. People from all over Greece and beyond would visit Pythia, the highest priestess, in order to get guidance and advice for their questions. 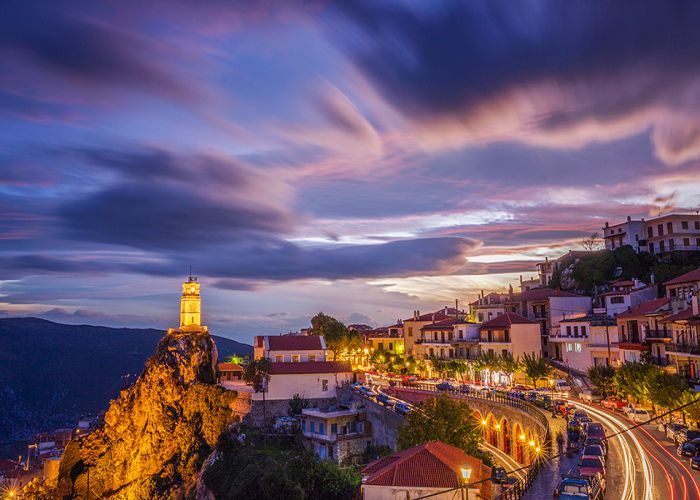 Pythia’s answers were characteristically enigmatic and controversial and fortunately, many of her prophecies have survived until today.  Some of the site’s attractions are the temple of Apollo, the temple of Athena Pronaia, the theatre, the gymnasium, and of course the archaeological museum.

Delphi is undoubtedly among the most charming places in the world, hence rightfully one of UNESCO’s World Heritage Sites. So, there are no excuses for skipping it!

When you visit Arachova, you can join us on a day trip from Athens to Delphi and discover the archaeological site with the help of an expert! 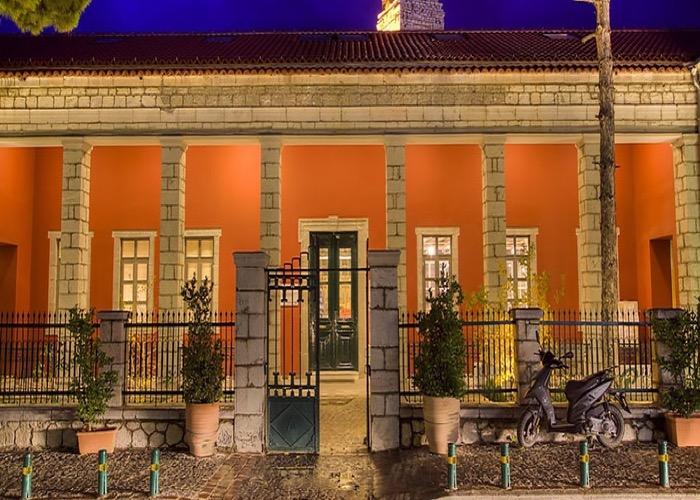 The region also has a very rich folk tradition and the folklore museum of Arachova is the perfect proof. A fun fact is that the building hosting the museum is an early 20th-century primary school.

As a visitor, you’ll get a taste of everyday life in the region during the past few centuries. The exhibits include agricultural and weaving equipment, toys, costumes, etc. The best part is that you can attend traditional craft courses, like embroidery and iron/stone crafting workshops. 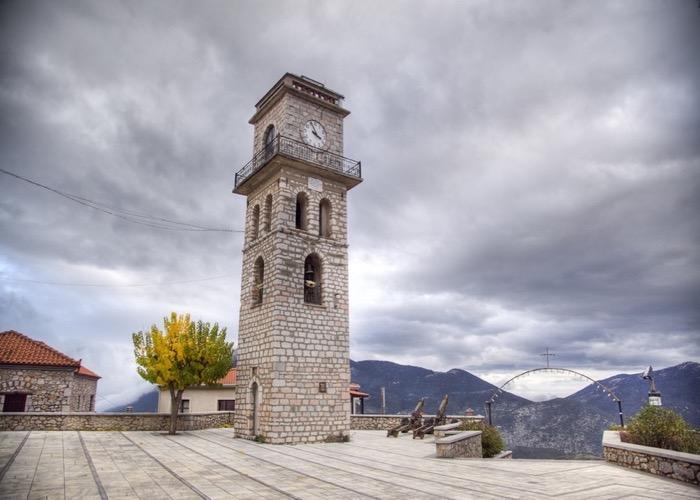 Located on the edge of the town of Arachova, St. George’s church is for sure one of Arachova’s highlights.  According to local historical sources, the church was built in 1833 on the ruins of an older one that dated back to the 17th century.

In order to get there, you’ll need to climb 264 stairs but don’t get discouraged!  The route goes through the town’s picturesque cobbled streets and as soon as you reach the church, the amazing view will definitely reward you. 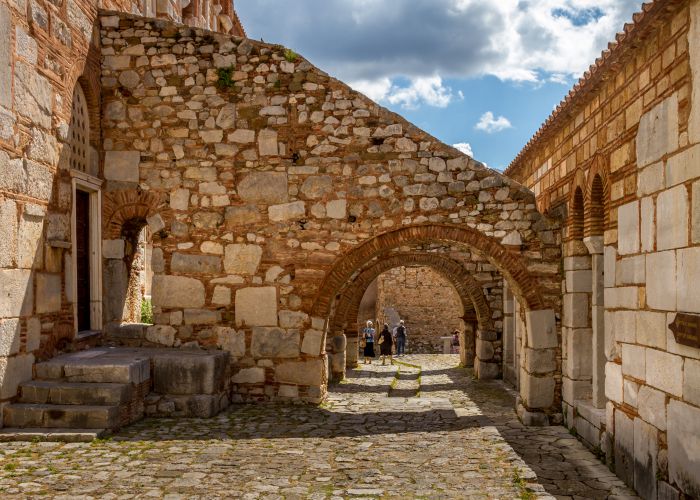 Located on the picturesque slopes of Helikon mountain, the monastery of Saint Luke is worth a visit while you are in the mountainous village of Arachova since it's one of the most important examples of Byzantine art and architecture in Greece, and therefore a popular destination. 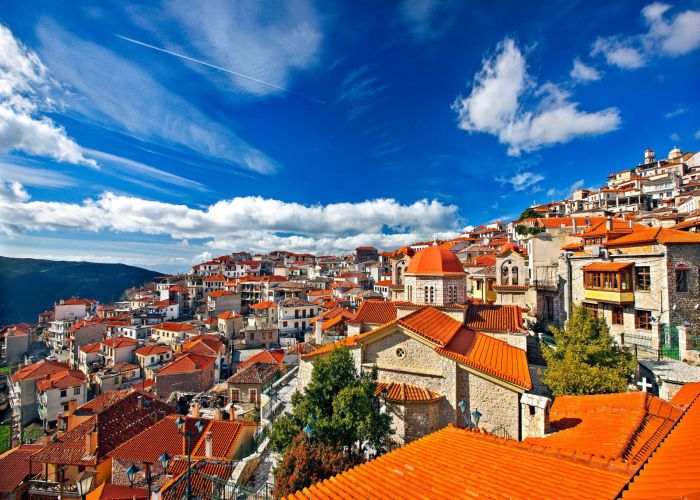 The main building is an octagonal church with a dome, which houses the relics of St. Luke and on the north side is a smaller church, dedicated to the Assumption of Mary, which was built in the 10th century. 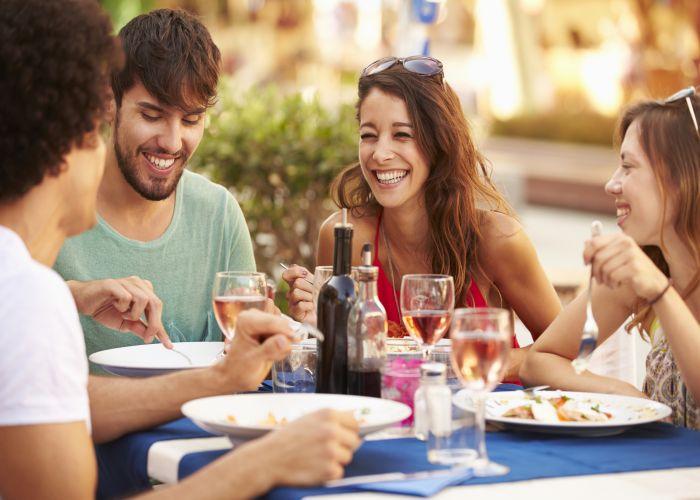 Arachova is one of the mainland destinations known for its authentic Greek products that can be found in any traditional grocery store.

Among the most famous of Arachova's delicacies are the pasta (perfect for pasta soup), formaella cheese, which is a local cheese with a protected designation of origin, that is made of sheep's milk and sometimes goat's milk, ideal for grilling, and honey with a deep red hue, to mention a few. 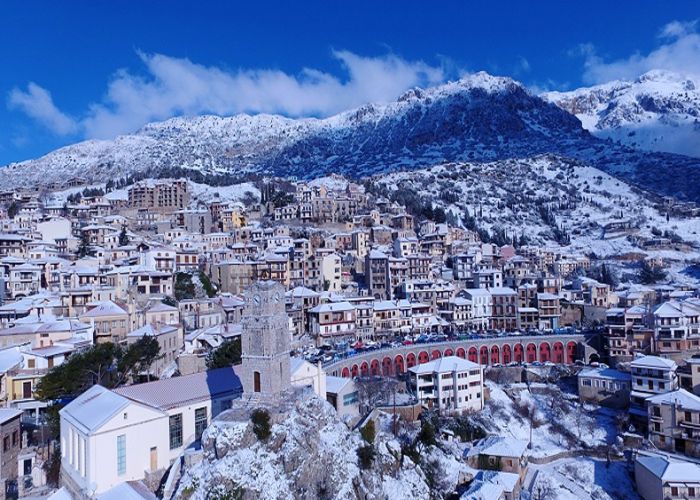 Also, don’t forget to stop by a traditional kafeneio (=café) for a cup of Greek coffee served alongside regional spoon sweets.

At the local taverns of Arachova, you can find a large variety of vegetable soups and meat dishes (lamb, pork, beef, even roe deer), as well as typical Greek dishes such as stuffed grape leaves. Last but not least, the local Greek spirit, tsipouro, is something you should certainly try.

If you’re not familiar with the term, tsipouro is a strong, crystal clear alcoholic drink, served usually at a particular type of Greek tavern, named tsipouradika. Always accompany your tsipouro with nibbles or mezedes as they’re called in Greece and don’t be afraid to experiment and test your gastronomic limits! 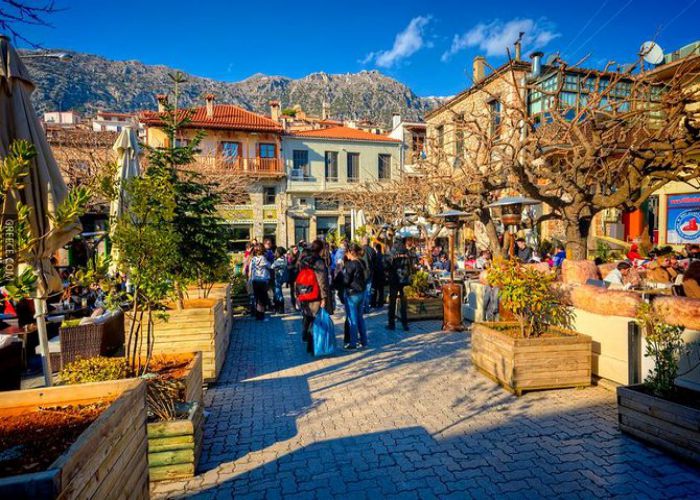 What is Arachova Greece known for?

Arachova is known for its rich history, traditional houses, and the long-lasting snow cover of its ski resort. Among these, is the tradition of the city's customs in the celebrations of Agios Georgios Day.

The trademark of Arachova is its popular Clock Tower. The Clock Tower was built in the 18th century, to be used as the bell tower of the adjacent metropolis of Arachova, the Church of the Assumption of the Virgin. 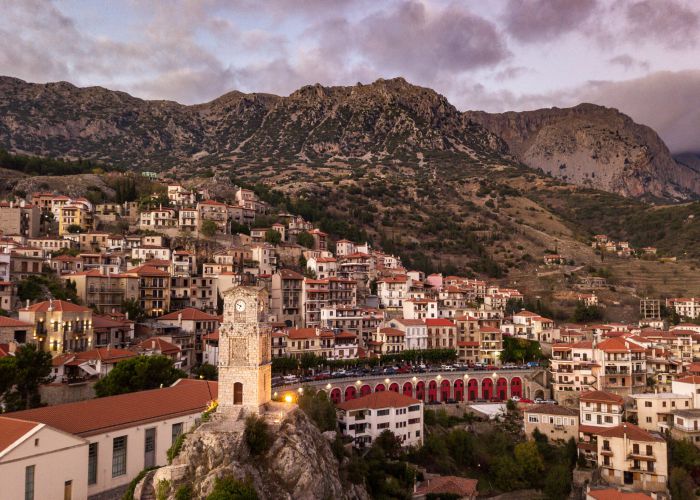 How do I get from Athens to Arachova?

Arachova is accessible from Athens via KTEL Bus. You can reach the bus at the Liossion train station. The bus journey between Arachova and Athens takes three hours. 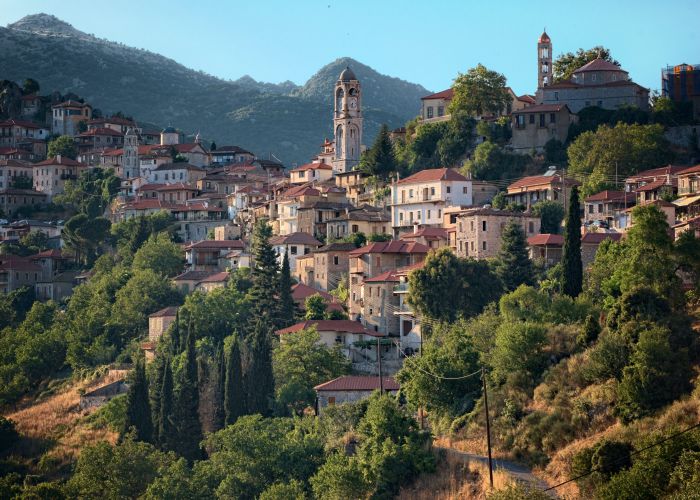 From high snowy mountain tips perfect for ski lovers, and dense forests for hiking to a beautiful traditional village for the culture hunter, Arachova truly deserves its title as the most popular winter destination in Greece. Waste no more time, plan your own trip to Arachova, or perhaps check out one of our Greece tours.

More in this category: « Family Travel Guide to Greece: Tips For Traveling to Greece With Kids || Useful Greek Words and Phrases for your Trip to Greece »
back to top