Taking the risk of sounding like a broken record, Greece, our beloved, sundrenched country, is the dream destination for most people in the world, with many of them making their dreams a reality and visiting it.

1. A quick look at public transport in Greece

As a result, the country has developed excellent tourist infrastructure, part of which is regarding transportation. Indeed, Greece has great public transport facilities. Domestic flights, ferries, buses, trains, and taxis all over the country allow you to reach even the most remote places in mainland Greece or the islands.

Here is an overview of the best way to transport around the country, from public transport in Greece to private transportation services, depending on your budget, priorities, and preferences.

A quick look at public transport in Greece 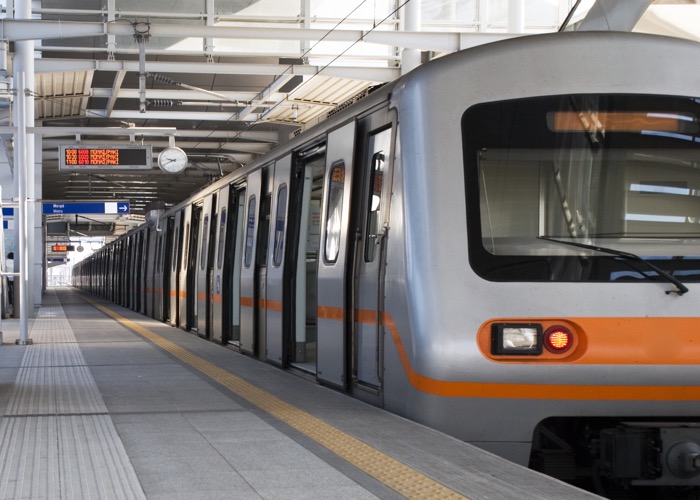 Expectedly, in Greek cities, public transport is more frequent, with many more stops and a much further reach. Across cities, the buses provide a more efficient way to travel around the city while the railway network follows, as does the Athens Metro system, which is exclusive to the Greek capital.

In fact, in the capital of Greece, Athens, you can get around using the Athens metro and electric railway, suburban railway, city buses and trolleybuses, trams, and taxis.

'KTEL' is an intercity bus system that offers very high efficiency between towns. Local KTEL buses connect all of the Greek mainland destinations, as does the intercity railway network, which is faster yet costlier.

Of course, Greece has excellent public transport connections between mainland Greece and the Greek island destinations, especially from the port of Piraeus. This doesn't always stand true regarding the ferry connection between the islands, so if you're thinking about a Greek island-hoping adventure, you need to be cautious of that and choose your islands wisely.

Domestic flights can significantly decrease the time to travel, although they will increase the budget. In addition to the popular Athens International Airport, there are airports in most big cities of Greece and on the most popular islands, while some of them even support direct international flights.

Here is an introduction to all ways of private and public transport in Greece. 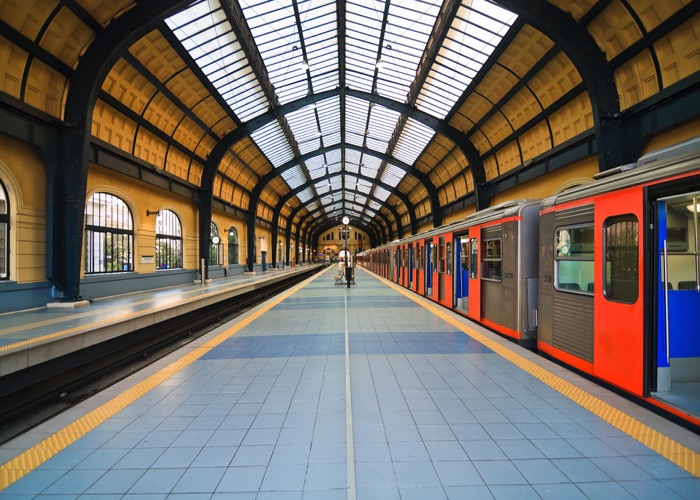 The Greek railway network, in many places, passes through landscapes of rare beauty. In fact, most of them are the exclusive privilege of the passengers, as only the train passes through there.

The Pelion train also operates - in the spring and summer - as a tourist means from Diakopto to Kalavrita, as does the environmental train of Nestos, which departs from Xanthi, passes through the Liveron station and then to Stavroupoli and ends in Paranesti.

When traveling by train, it is worth observing the architecture of the old stations of the network, most of which were built at the end of the 19th century and are true masterpieces of early industrial architecture and monuments of the modern cultural heritage of the Greek state. Some of these stations do not operate today, but they are preserved without losing their charm.

In the first continental railway network, stations were simple volumes with neoclassical and regional elements. Such were the stations at Afidnes, Acharnes, Amfikleia, etc. The Central European type of station dominated the Macedonia-Thrace network. Also, the stations of Alexandroupoli, Didymoteicho, and Pythia, which were wooden and had two floors, were of remarkable aesthetics.

Given their historical architectural value, many stations fall under the jurisdiction of institutionalized bodies and procedures of the Ministry of Housing and Urban Development, which take responsibility for the preservation and promotion of the newest architectural heritage.

The brightest example of that is the Peloponnese railway station in Athens, which is a building by Ernst Ziller and is a preserved building of special architectural value. It is a miniature with minor variations of the Sirkeci Railway Station of Istanbul.

Online tickets are available, and you can book your online ticket for your train line here. 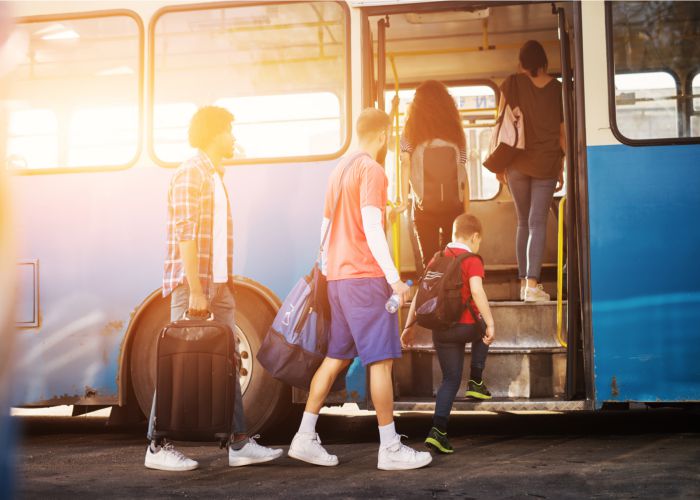 Arguably, the most affordable way of traveling with public transport in Greece is with KTEL buses. KTEL is an acronym that actually is an association among bus operator companies.

Today there are over 60 KTEL companies with a total of 4,136 KTEL buses in their fleet. They serve to transport passengers between the provincial cities and the large urban centers (Athens, Thessaloniki, Patras, Ioannina, Volos, Larissa) as well as between neighboring cities and around the Greek islands.

Also, many KTEL buses serve routes between the capital of a prefecture and the towns with large population villages of the prefecture, while there are also routes between Greek cities and cities of neighboring countries.

KTEl buses, and the bus network in general, occupy a large percentage of the total transportation in the country, with the Kifissou and Liosion stations in Athens being the largest KTEL stations. 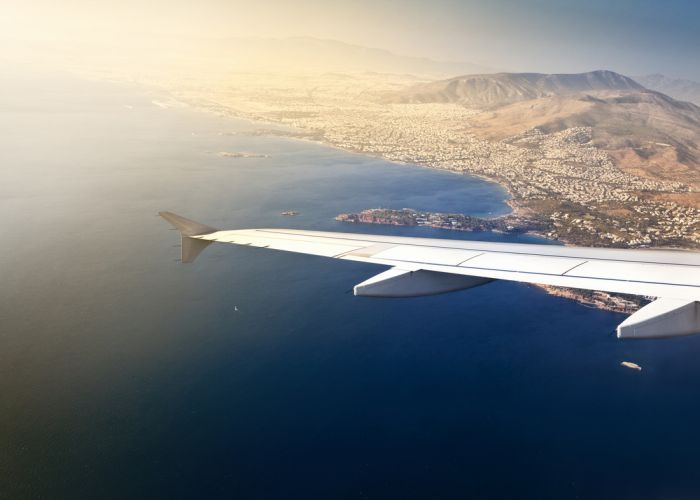 It is common knowledge that planes are the easiest, most convenient, and safest way of transport - that is, of course, unless you have a crippling phobia of flying.

There are many airports in the country, in most Greek cities and Greek islands, which make transportation by plane efficient and effective. The domestic flights have an excellent connection, while, in addition to Athens international airport and Thessaloniki's airport, there are many in all of Greece with direct international flights that can take you from and to your country in no time. 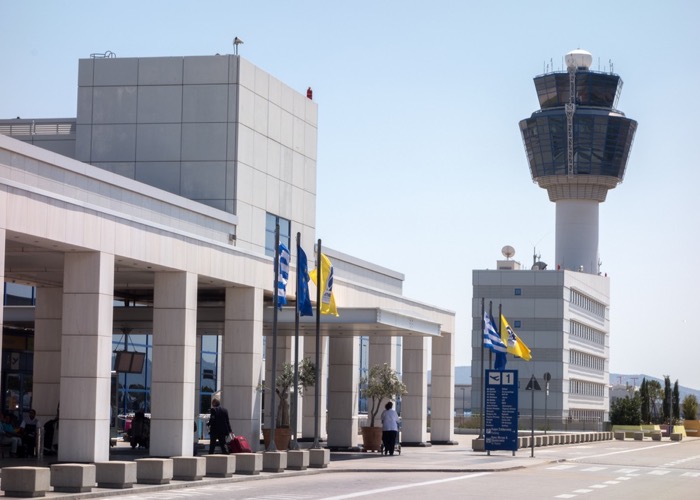 The Greek islands with airports that service direct international flights are the following: Santorini, Mykonos, Corfu, Kefalonia, Lefkada, Zakynthos, Rhodes, Kos, Karpathos, Skiathos, Lesvos, Lemnos, Samos, and Crete (Chania and Heraklion). Of course, there is always the option of charter flights, which are not part of an airline's regular schedule.

Naturally, flying is the most expensive way of travel. However, if your budget allows it, we would highly recommend you splurge on your flights, as they will enhance the quality of your trip greatly!

By ferries to the Greek islands 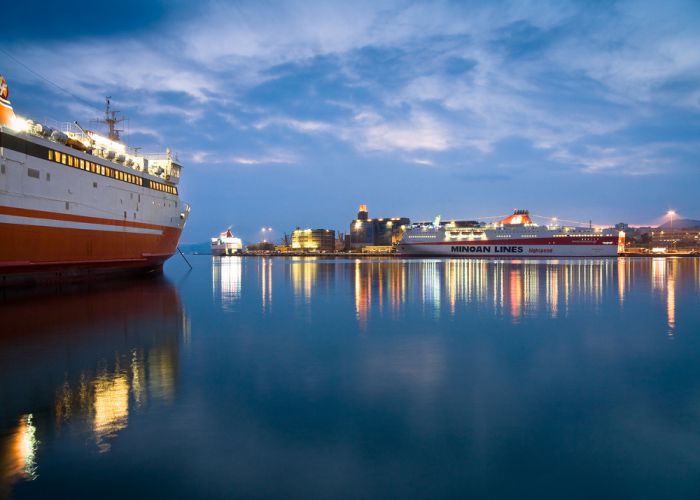 There is an extensive ferry network that connects mainland Greece with the Greek islands. Most of the ferries leave from the port of Piraeus, with the port of Lavrion, the port of Agios Konstantinos, and the port of Volos following.

Between the island, the ferry route connection might be a bit more limited, but with careful planning, you can indulge in a Greek island-hopping adventure easily.

There are different kinds of sea-going vessels that cover all ferry routes: ordinary ferries, new-generation "speed" boats, catamarans, and flying dolphins that are used for nearby island destinations and cannot carry cars or any other type of vehicle.

Ferry tickets are not as expensive as flight ticket prices, but especially during the high-season months, they're not far off. 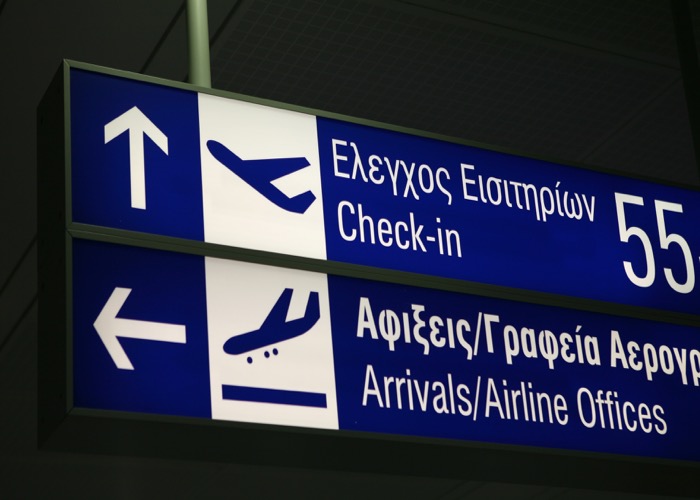 The buses, the train, and the Athens metro are excellent ways to travel using public transport. That being said, as you can imagine, public transport is not the most luxurious way to get around Greece nor the easiest.

Another -much less affordable- alternative to public transport is the use of taxis. The minimum taxi fare comes up to € 4, while the official prices are € 0.90 per kilometer for the single rate and € 1.25 for the double rate (00.00 to 05.00). Of course, additional charges apply for carrying suitcases, waiting, and arranging pick-up. For example, a taxi ride from Athens airport to the city centre can cost up to € 50. 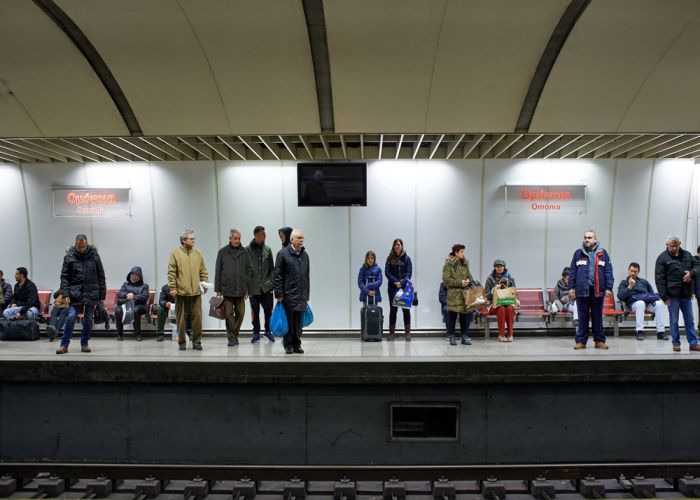 In recent years, a few mobile apps have popped up to ensure a safe and efficient taxi ride with polite and responsible taxi drivers. Our favorite is Free now, from which you can select your driver, the time of your departure, and pay online.

Please keep in mind that while in Athens, the color of the taxis is a signature vibrant yellow, in the rest of the cities of Greece, the colors of the taxis differ, offering a pleasant variety to the eyes of the visitors. So if you're in Thessaloniki and a dark blue taxi approaches you, don't be alarmed! 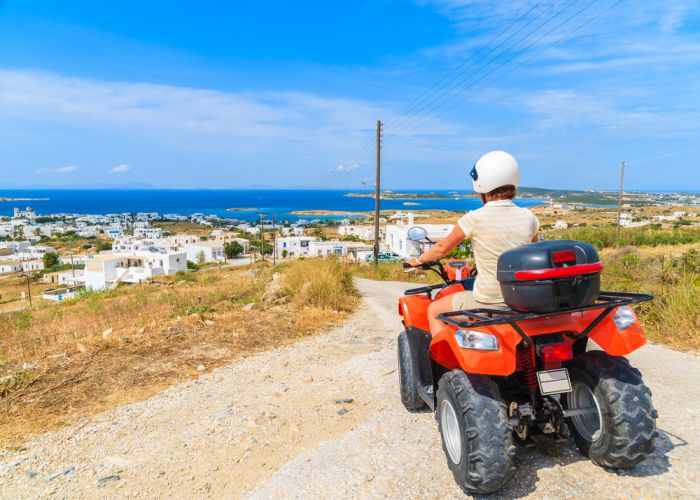 Greece's spectacular mountains and coasts provide some of the most enjoyable driving experiences in the world; driving through the land is probably one of the best ways to explore Greece.

However, I'm not sure if it's the safest and wisest one, especially for foreign visitors that are not familiar with the driving habits of the locals and the narrow streets one can stumble upon in central Athens and the Greek islands especially.

We are not proud of it, but the truth is that our driving habits are less than great, especially for those who are used to driving in foreign countries, with a much calmer attitude and less road rage. 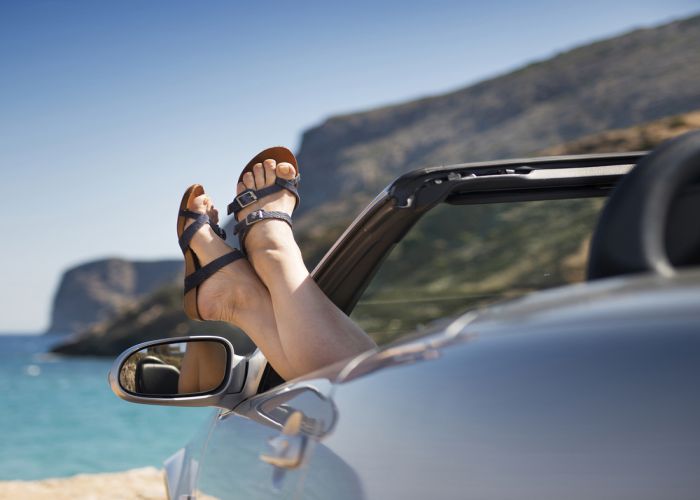 Overtaking on bends, barging out of side roads, or not showing maneuvers are commonly practiced. Drunk driving is another problem, especially on weekends and public holidays.

However, if you think you can handle Greek driving etiquette and you want to drive yourself around the country and its beauties, there are a few things to keep in mind.

To travel to or within Greece, be reminded to check if your driver's license is valid for Greece. Thankfully, insurance contracts in all EU countries are valid in other EU states. However, if you're visiting from outside Europe, you must also insure your car.

Naturally, if bringing your own seems like too much work, you can always rent a vehicle. Car rental prices in Greece range depending on the type of vehicle you want to drive. In any case, there are plenty of car rentals in any Greek city, village, or island you visit, so don't worry; you won't be left without a vehicle. 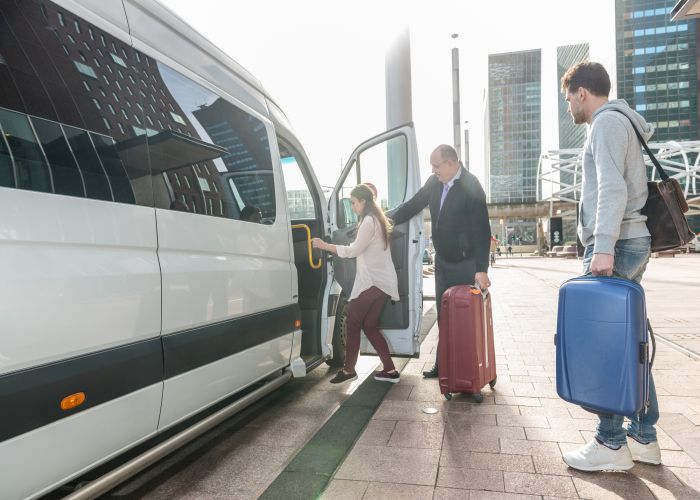 If your budget allows it, there is one way to transport in Greece in luxury and style, and without having to deal with any of the hassles Greece public transport entails. One that will not include you running to catch Athens metro lines, standing in line at the Athens train station, or trying to figure out which one of the bus routes will take you where you need to be.

That is by using private transportation services. We could arrange your transfers around Greece. Alternatively, there is an excellent airport transfer service from Athens airport to the heart of the city we know and love. Welcome pickups will transport you effortlessly, safely, and lavishly, making your arrival in Athens a smooth and joyful experience.

What is the most common transportation in Greece?

Buses -both local and KTEL buses- are the most popular Greece public transport due to their frequent routes, their reach to regional roads, and their cheap prices. The bus network stretches across every inch of Greece, making your exploration of the country possible.

Is transportation easy in Greece?

Yes, it is relatively easy. Public transportation in Greece is very good. Bus, ferry, and train services can take you to remote areas and beyond. The service operates on an annual schedule and is rarely late or canceled.

Additionally, private transfers and flights make Greek transportation a walk in the park! 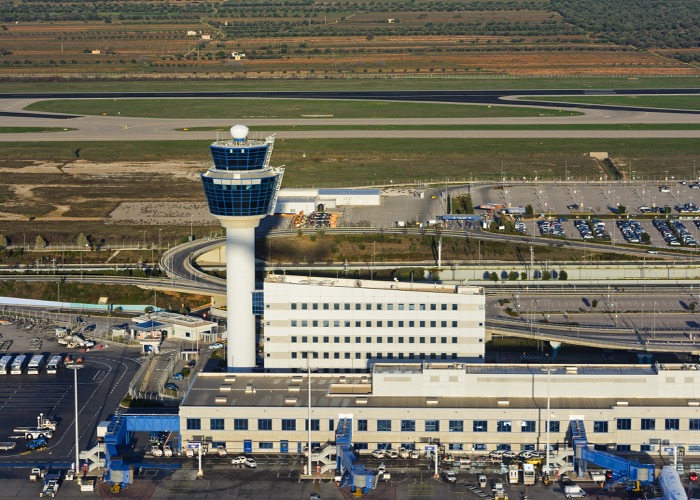 No matter where you want to go during your trip to Greece, you'll be able to reach your destination with ease. Now you have all the information you need to conquer Greece, one beautiful region at a time!

More in this category: « Travel Insurance for Greece
back to top

1. A quick look at public transport in Greece