Who doesn’t want an excuse to stuff their face with delicious treats? And what could possibly be a better excuse than Christmas? Greece is known for its magnificent food and the festive season presents itself as another opportunity to explore the Greek cuisine that is guaranteed to -once again- impress you. Here you will find our list of our favorite Christmas treats that you should absolutely try while visiting Greece on Christmas!

2. The sticky goodness of melomakarona

5. Lalagia: A Christmas treat from Mani 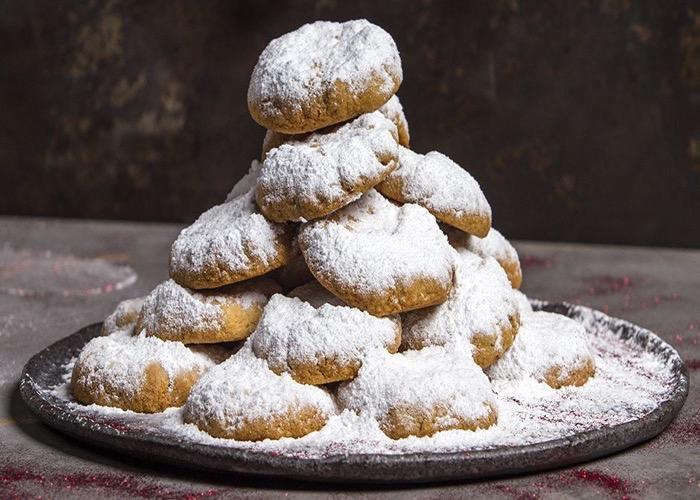 Kourabiedes are sweet Christmas cookies made from toast, butter, and almonds, all sprinkled with powdered sugar. These traditional Greek sweets that characterize the Christmas holiday season in Greece are said to have originated from Persia (first appearing in the 7th century when sugar was brought to the region) and are widespread in Greece, Turkey, and the rest of the Balkan countries.

Analyzing the Turkish word 'kurabiye', its roots can be found in the words kuru which means dry, and 'biye' which is a loan from the Latin word for 'biscuit'. Biscuits are produced through a method of double baking, which has been in practice since ancient times. This allows for excess moisture to be expelled, which therefore makes the biscuit last even longer.

The Greek kourabiedes are quite similar to the Scottish shortbread in taste and are one part sugar, two parts butter and three parts flour. The oriental origin of kourabiedes, however, requires sheep and goat butter along with almonds, which makes it particularly distinct from the European cookies of the same family. Although kourabiedes may not be the healthiest of the options, they are loved by many due to their rich taste and unique, crumbly texture.

The sticky goodness of melomakarona 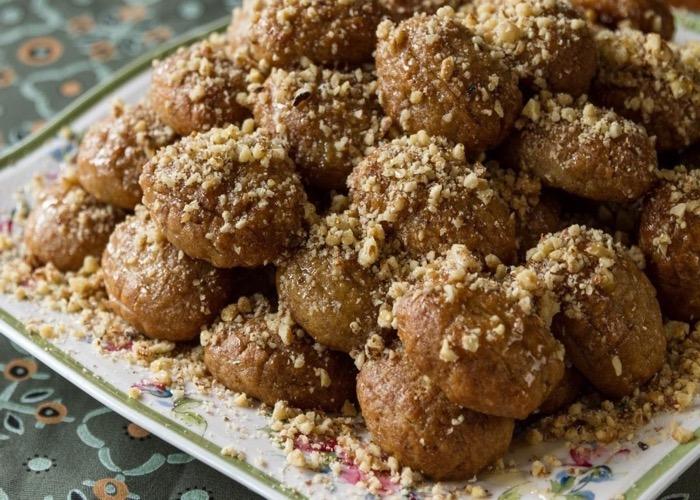 This sticky goodness was, is, and always will be our favorite Christmas treat. In Greece, the taste of melomakarona is directly connected to the joy of the Christmas holidays; however, their past is quite unexpectedly morbid. A Greek pastry made mainly from flour, semolina, olive oil, orange juice, and honey, it is one of the healthier options as it is the lowest in calories.

Melomakarona along with kourabiedes are the traditional Greek treats that are considered indispensable in every home mainly during the Christmas period and in English, this sweet treat can be found under the name of the small honey cake.

Although the first thought that comes to mind is the Italian word macaroni, the name of melomakarona actually comes from ancient Greece! Specifically, macaroni comes from the ancient Greek word 'macarias', which was a piece of bread in the shape of the modern melomakarona which was offered after funerals.

Later, the bread was dipped in honey syrup, got renamed melomakarono, and was established as a 12-day confection. The Latins and later the Italians used the word 'macarone' as 'maccarone', which eventually ended up meaning spaghetti.

Finally, in France and England, a kind of almond biscuit was called macaroon (the well-known macaron). Putting their morbid history aside, the modern melomakarona are healthy and unique Christmas treats that everyone should try! 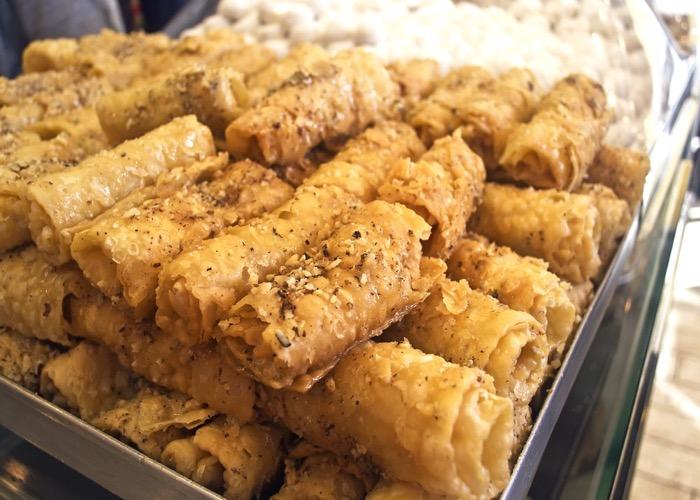 Diples (which can be translated as folds) is a Greek Christmas dessert, believed to come from the Peloponnese, in which the main ingredient is thin dough.

Not impressive, is it? Well, the thin dough may not be the most impressive of ingredients; diples, however, are arguably one of the most delicious and traditional desserts Greece has to offer. The dough is folded into various shapes, fried in hot oil, doused in syrup or, more traditionally, honey, and finally sprinkled with cinnamon and chopped nuts. The folds can have various shapes, but they are most commonly shaped like spirals, bowls, and flowers.

Diples are usually served on New Year's Eve, but sometimes they are offered at weddings as well! The folds of diples are said to symbolize the infancy of Christ, while honey symbolizes the welfare and creativity that we want the New Year to bring us. 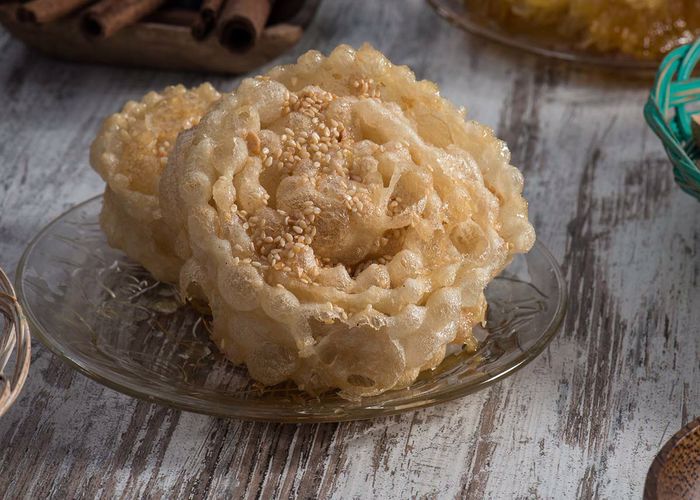 However, if you are visiting Crete during Christmas, then you may as well try the Cretan version of Diples, Xerotigana.

Despite the only difference lying in the shape and the folding of the dough, which requires a lot of skill and experience, Cretans take great pride in their version of the Christmas dessert. As they should, this crispy, syrupy fried dough, sprinkled with walnuts, sesame seeds, and cinnamon makes the perfect Christmas delicacy.

Lalagia: A Christmas treat from Mani 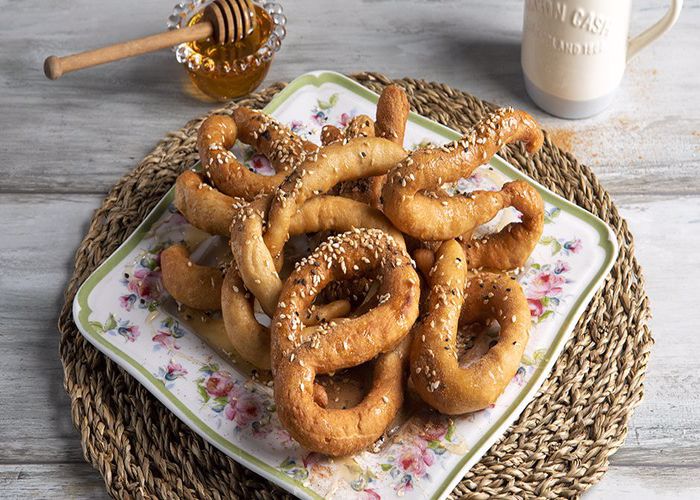 Considering that the Peloponnese is a magical peninsula in Southern Greece, filled with local villages to uphold traditions and Christmas customs, it is only natural to present a unique Christmas treat for you to try.

In Mani and the Messinia region, Lalagia is a must during the Christmas season. Much like loukoumades, Lalagia will remind you of a Greek version of donuts, since they are an oval-shaped fried dough, served either sweet or savory, with feta cheese! The traditional Christmas version is the one where the fried dough is sprinkled with honey and walnuts or powdered sugar. 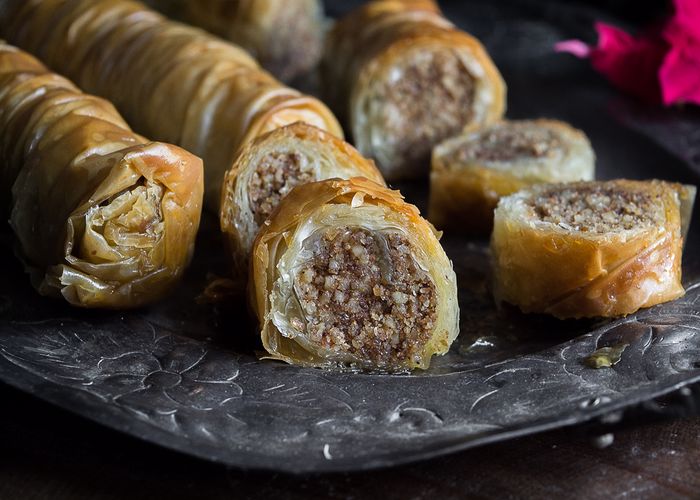 You’ve probably heard of Baklavas before, a traditional Greek dessert much loved ever since the Ottoman Empire, but did you know that in the Epirus region there’s a festive version of Baklavas, so they can celebrate Christmas in the sweetest way possible?

Klostari, as this traditional Christmas treat is called, is made with a crust sheet and filled with plenty of grated walnuts, honey, and cinnamon. Its name comes from the way it is made, as the walnut filling and the sheets are "spun" and strained like a thread. If you find yourself in the beautiful city of Ioannina, you should definitely try it. 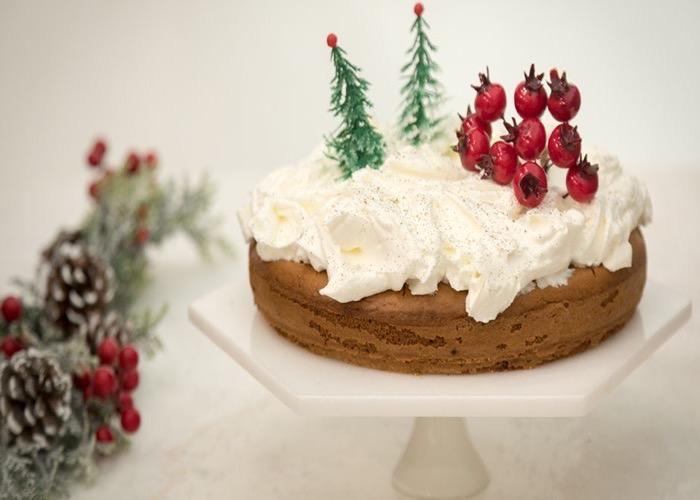 Vasilopita is the pie made in some, mostly Christian, countries on New Year’s Eve and is cut shortly after the year changes. As it is the first thing we taste, it is very important to be as good as we want the whole of the following year to be. In Athens, it is made mainly of flour, eggs, sugar, and milk. It can come in various sizes and types but is usually fluffy and sweet.

In Western Macedonia, vasilopita is often made with cheese or even parsley. Also, on the vasilopita, the New Year's number is often written with either some type of marmalade, rows of peeled almonds, or powdered sugar. Regardless of whether they are sweet or savory, they all have one thing in common: an unusual New Year’s Eve custom according to which, inside the pie one should place a gold or silver coin.

With the coming of the New Year, the mother of the family cuts the pie into triangles, a slice is then offered to each person except for three pieces which are dedicated to Christ, the Virgin & the home. These slices are then eaten on the following days. The one who finds the hidden coin in their piece is believed to be rewarded with good luck for the rest of the New Year!

You would be lying if you claimed that all this talk about Christmas treats has not left you craving all the Christmas goodies you can find. We apologize in advance for having wrecked your diet. However, we do not apologize for the opportunity that we gave you to get to know the Christmas treats of Greece because the Greek Christmas experience cannot be considered complete without them.

Are you interested in tasting all these traditional delicacies while discovering unique places in Greece with a convivial Christmas atmosphere? Check our list of the best places in Greece to spend Christmas or discover other unique customs and traditions, different from anywhere else.

And remember; Greece isn’t just sunny days and endless beaches! Figure out all the reasons why you will love Greece off-season.

More in this category: « Things to Eat in Athens for Vegetarians || A Guide to Greek Spirits »
back to top

2. The sticky goodness of melomakarona

5. Lalagia: A Christmas treat from Mani