The luscious Cretan cuisine has been associated with health since the early 60s, due to the Seven Countries Study, a study that showed Cretans having the best health conditions and the lower rates of coronary heart disease and cancer mortality than all other populations studied.

6. Why Cretan cuisine is so popular?

10. Something sweet to treat yourself!

11. Something strong to end your meal!

Although rich in flavor, the Cretan cuisine is rather sparing regarding its variety of ingredients. The traditional dishes of Crete can be cooked with just a handful of products, with the flavorsome result being achieved through the art of processing simple materials, rather than through the concoction of intricate food combinations. Now that we’ve waxed lyrical about the unmatched value of it, it’s time for you to get a practical insight into this unique cuisine. Here, we have gathered our favorite Cretan recipes that you absolutely need to try. 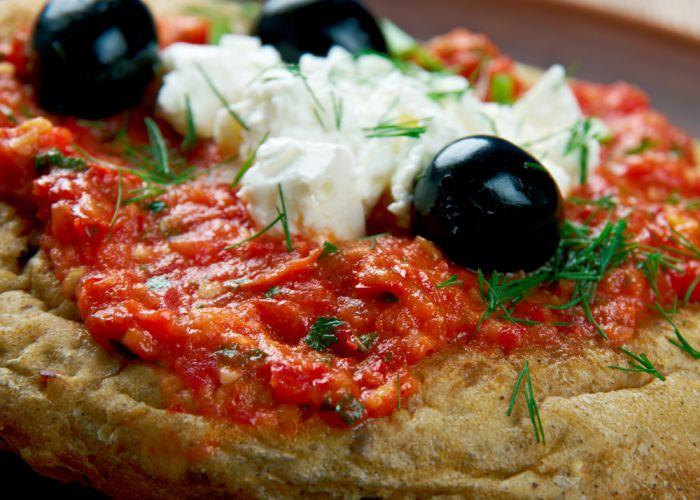 One of the island’s most famous offerings, dakos, is a Cretan meze consisting of a slice of barley rusk topped with chopped tomatoes, crumbled mizithra, or feta cheese and flavored with herbs, such as dried oregano. Olives and capers are optional.

The rusk is usually soaked in water, depending on preference, while the moisture of the juicy tomatoes and olive oil give it a fluffy texture that keeps it fresh and delicious. The simple yet tasty dish was named after the homonym traditional Cretan rusk, which is one of the most fundamental ingredients of not only this meal but also the traditional Cretan diet.

The mention of rusk can be found in ancient writing, carrying the name ‘paximadi’, from Paxamos, a gastronomic writer of the Roman era. Rusk was perceived to be the bread of the poor, having the ability to be maintained for a long time, due to the lack of moisture the excessive roasting at low temperatures granted.

In Crete, an island primarily occupied by sailors, shepherds, and farmers, dakos' durability established it as a fundamental food in the locals’ diet, a position it still holds to this day. Dakos is also known as koukouvayia, which translates to ‘owl’ in Greek, while in eastern Crete it is called kouloukopsomo (from koulouki and psomi, meaning ‘puppy’ and ‘bread’, allegedly the bread given to puppies). 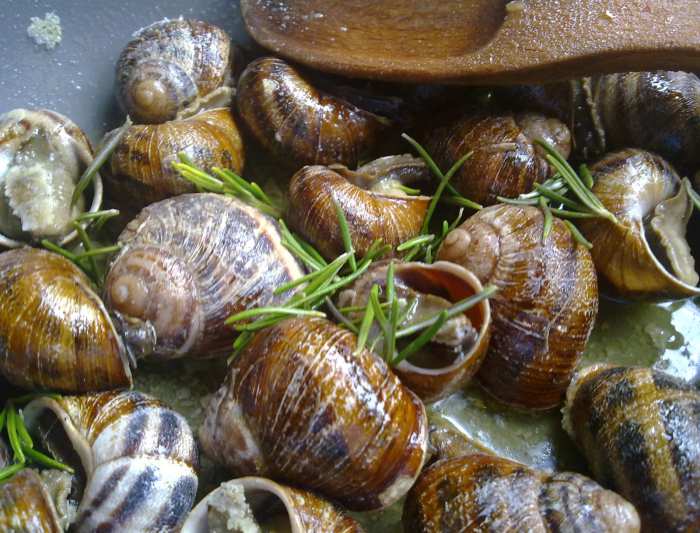 This is where we want you to keep an open mind. Although not for the faint-hearted, snails can be found in some of the most sophisticated and expensive dishes of international, world-renowned cuisines. In Crete, snails, also known as ‘chochlioi’, have been an integral part of the gastronomic culture of the locals since ancient times.

Today, they are a widespread delicacy, usually served fried, or boubouristi, the best way for someone to experience snails, according to the locals. The word boubouristi comes from another word of the Cretan dialect, abouboura, which means ‘face-down’; a direct reference to the way they are cooked.

The snails are being collected every year from February to April, after rain, and can be cooked until September. The classic way to make chochlioi boubouristi is by following this process: after washing the snail shells thoroughly, you put them in a frying pan and sprinkle them with plenty of salt.

After their juices have dried off, you add oil to the pan and fry them face-down. Lastly, you turn off the stove and add vinegar and rosemary; your house will smell heavenly! Snails’ meat is not only a treat for your taste buds, but for your health as well. It’s low in calories and fats while being high in organic nutrients, essential amino acids, and valuable fatty acids.

Don’t hesitate to try this local flavor; eat chochlioi boubouristi accompanied with a generous serving of raki, the traditional spirit of Crete! 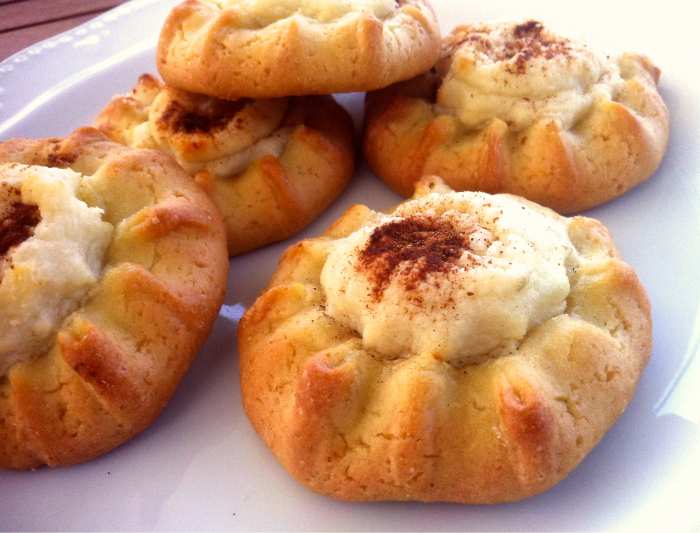 Kalitsounia are small Cretan cheese or herb pies, near and dear to all Greek hearts. They can be salty, either with a filling of local mizithra cheese or an assortment of local herbs.

More often than not, however, kalitsounia are sweet, stuffed with a sugary mixture of mild mizithra cheese -sometimes even replaced by Italian mascarpone or ricotta cheese- and topped with honey. Kalitsounia used to be a holiday tradition on the island.

Nowadays, however, this fluffy and highly addictive delicacy is being consumed throughout the year in every part of the country.  Arguably, kalitsounia is one of the tastiest and most versatile local dishes of Crete. The small pies can be eaten as a snack, as a light meal, or as dessert; they can hold square, triangular, semi-circular, or round shapes; they can consist of various fillings, salty or sweet; they can be fried or baked in the oven or on a satsi, a piece of metal resting on a tripod and placed on charcoals or on the fire.

No matter how they’re cooked and what they’re made of, they all have a common denominator: they are finger-licking good! 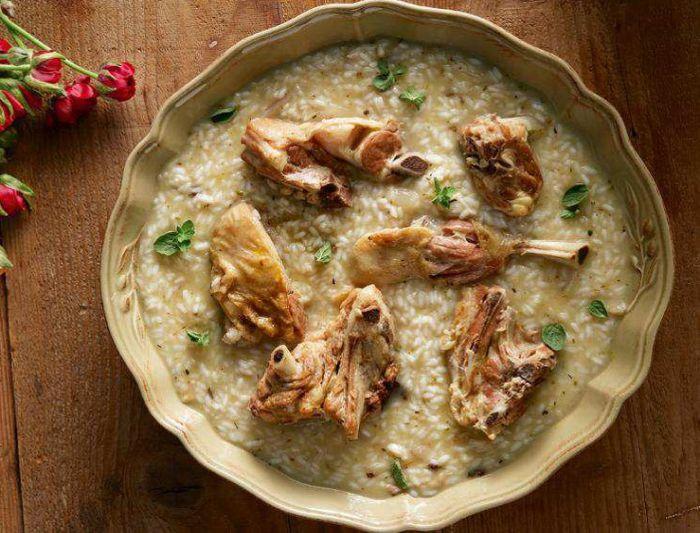 Gamopilafo, with its name deriving from the combination of the words ‘gamos’ and ‘pilafi’ -translating to ‘wedding’ and ‘rice’ in Greek- is a traditional Greek wedding dish served in most regions of Crete as the celebratory main course. It is essentially a lamb broth risotto, usually served with pieces of slow-cooked lamb, and for many, the ultimate Greek comfort food.

The history behind gamopilafo is unclear. According to urban myth, it is most likely the remnant of the Venetian occupancy of the island. Yet, the similarity gamopilafo holds to risotto, leaves open the possibility for the dish having both western (risotto) and eastern (pilav) origins.

Therefore, gamopilafo is most probably a consolidation of Venetian and Eastern traditions, with the addition of elements taken from Turkish cuisine, due to the Ottoman rule. Despite its several cultural influences, gamopilafo’s flavor is characteristically Cretan, mirroring the island’s heritage and dynamic. It’s a fairly easy recipe, using only a few ingredients, with its mind-blowing flavor being achieved by the meat’s high quality and the pungent aroma of the goat-milk butter, also known as ‘staka’.

Gamopilafo can take up to 3 hours to cook, including preparation time, but it is worth every second of it! 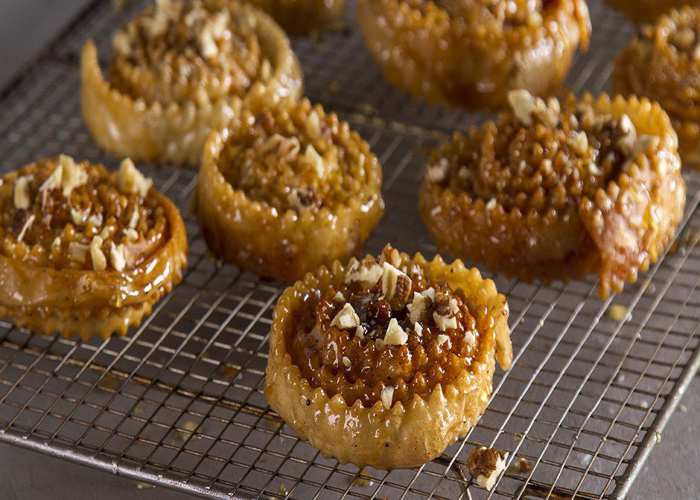 In Crete, you can’t celebrate Christmas without eating the syrupy goodness of kserotigana. The crunchy dessert consisting of crispy dough drenched in syrup and sprinkled with nuts, sesame seeds, and cinnamon, has been a staple in the Christmas traditions of both eastern and western Crete for years.

Nowadays, the local dessert is no longer served only during Christmas, but also in any other important celebratory moments in Cretans’ lives, such as weddings, baptisms, and engagements. The recipe for kserotigana is once again simple, consisting of just a few basic ingredients.

The difficulty of the recipe, however, which makes the making of kserotigana a venture usually attempted only by experienced and capable cooks, lies in the folding of the dough. It traditionally resembles a rose, but can also be found in different shapes achieved through various techniques, while its construction being a task for two people: one wrapping the dough and one swiftly and carefully placing it in the hot oil in the correct direction.

The icing on the cake? Lacking both eggs and dairy products, kserotigana is the ultimate dessert for vegetarians and vegans!

Why Cretan cuisine is so popular? 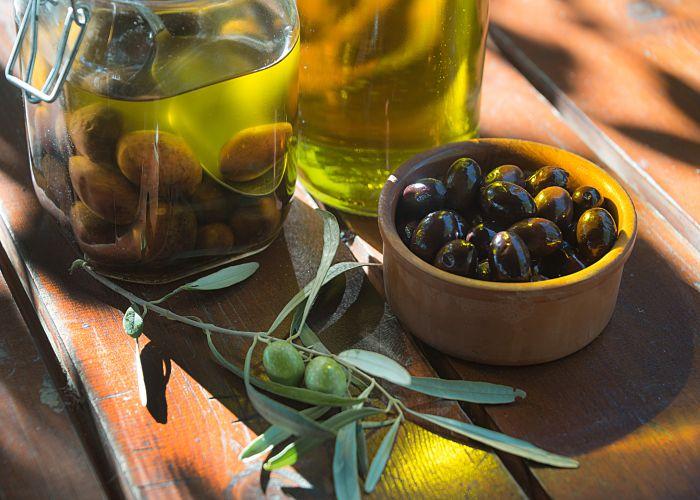 From the initial nibble to the very last savored bite, every Cretan traditional dish is built upon the most basic earthy yet freshest local ingredients!
From the mountain regions of Psiloritis to the remote shores of the island, Cretan nature blasts from greens, aromatic plants, native wild herbs, fruit, olive trees, and rough cereals, whose cultivation is favored by the Mediterranean climate.
Flower or thyme honey is probably one of the best examples of Cretan authentic aromas. Livestock is also abundant on the island; sheep, goats, pork, and poultry, as well as, other animal-derived produce, such as dairy products, play a major role in Cretan gastronomy. In general, Cretan cuisine uses a whole palette of flavors and aromas, where Crete’s liquid gold, extra virgin olive oil, plays the most eminent role.

Most of the Cretan traditional recipes are cooked with lots of olive oil, only to their benefit. Olive oil is the core ingredient of any dish or savory pastry in the Cretan diet. Try fried potatoes in olive oil and you'll be spoiled! 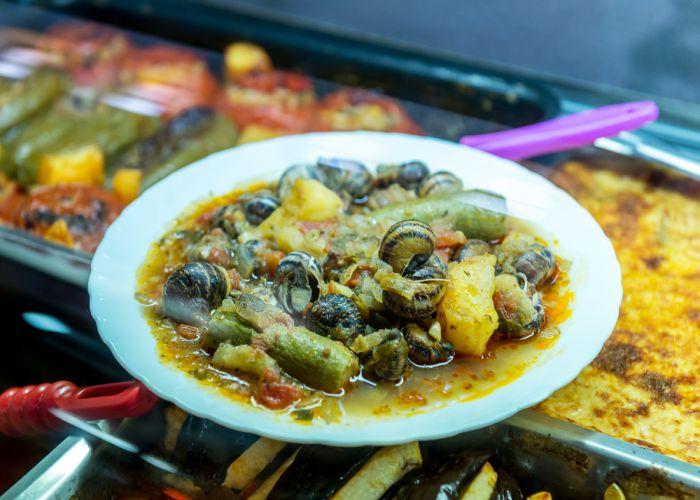 Whether you are a passionate foodie or a traveler exploring your way through the beauties of the island, Cretan traditional cuisine will jeez your senses from the very first bite!
Get started by tasting some of the most tasteful Cretan appetizers and side dishes. A typical Cretan appetizer includes marinated olives, sliced tomatoes and cucumber, the famous graviera cheese, and barley rusks. Don’t miss the chance to taste the ever-popular dakos or koukouvagia. Dakos is made from traditional dried bread topped with grated tomato, xynomyzithra cheese, olive oil, and oregano: a simple snack, but utterly exquisite!
Going for the main dish, Indulge yourself with a selection of delicious traditional delicacies; fried snails, - lamb with wild herbs, smoked pork (apaki), dolmades - vine leaves usually stuffed with rice - and pork meat with celery are just some of the local dishes you can relish, while you are eating your way through Crete.
What about seafood? Even though Crete is an island, local people don’t eat seafood as often as they savor meat. Local seafood delicacies worth a splurge though! Get the chance to taste a large selection of first-class seafood dishes paired with refreshing wine and make sure that your seafood binge takes place by the sea where your eyes meet the infinite blues!
Authentic Cretan Cooking Class in Chania including transfers
LEARN MORE
BOOK

When the wine flows… 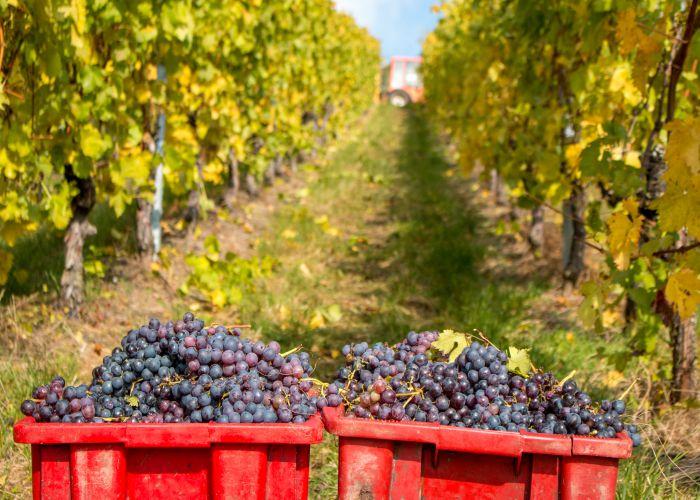 Did you know that Crete is one of the nation’s biggest wine producers? Visiting Crete, many travelers get surprised by the unique local wine varieties. Cretans traditionally accompany their meals with locally produced wine and very often with homemade wine. As this tradition, has been systematically grown in Crete for more than 4000 years, wine production and wine consumption are part of people’s culture!

Something sweet to treat yourself! 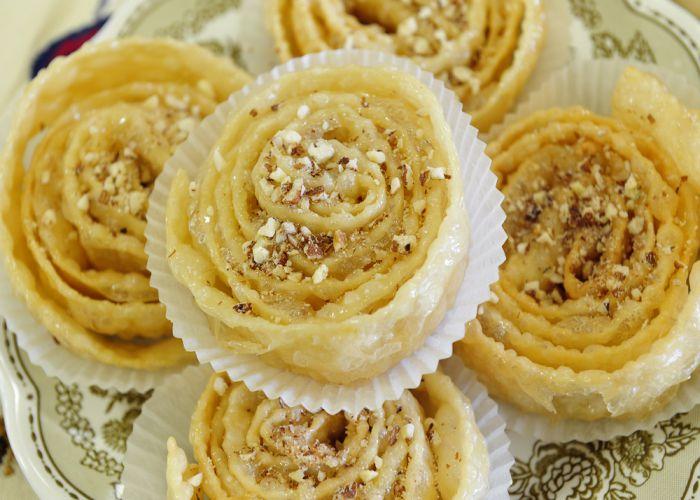 And what if you are in the mood for something sweet? Crete offers a remarkable variety of mouthwatering desserts and pastries, made according to old grandma recipes.

Something strong to end your meal! 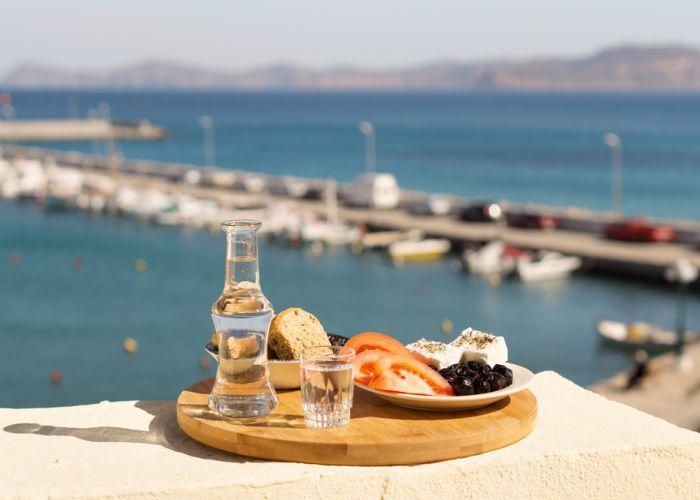 Due to the various inhabitants that have lived on the land over the centuries, Crete has accumulated several gastronomic influences. Through these influences, however, Cretans have kept the distinctive qualities of their unique, traditional cuisine, adapting them to suit their way of life. 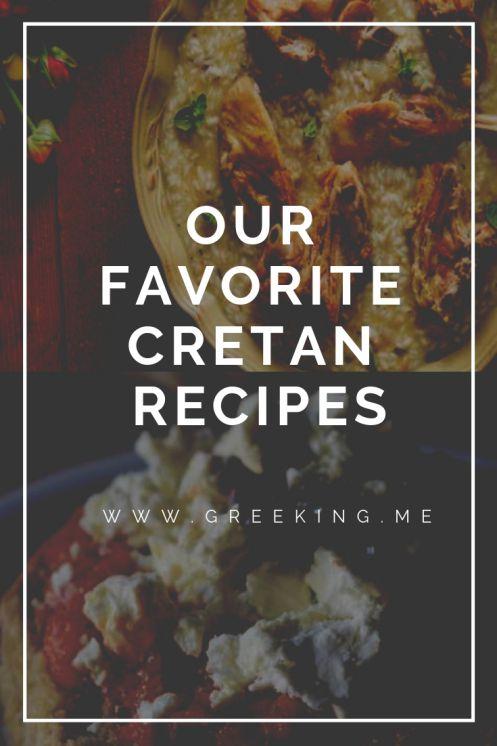 More in this category: « Santorini Wine Culture & Best Wineries || The Most Popular Greek Products »
back to top

6. Why Cretan cuisine is so popular?

10. Something sweet to treat yourself!

11. Something strong to end your meal!