The scrummy Greek diet, which is based on healthy, fresh ingredients and counts thousands of years of existence, consists of a number of traditional dishes, with every region having its own signature mouthwatering delicacies to take pride in. The island of Corfu is no different. Apart from its vast history, impressive Venetian architecture and striking natural beauty, its cuisine is something to write home about, and this is exactly what we’re about to do; here are the top traditional dishes of Corfu you can’t miss! 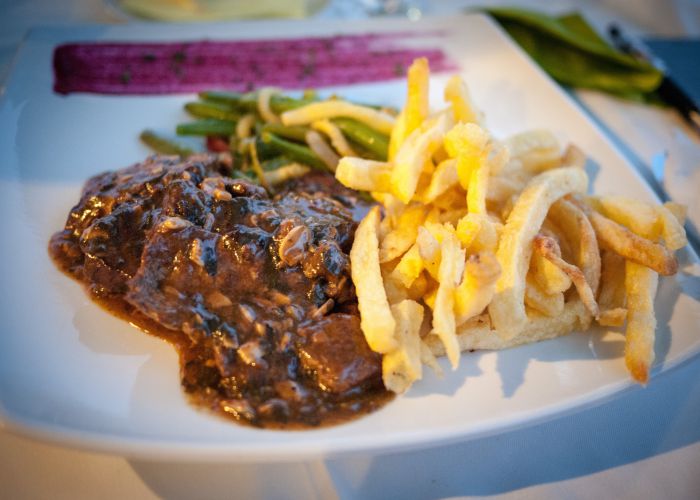 Probably the most popular and emblematic Corfian dish is sofrito. The name of the dish clearly refers to Italian cuisine, coming from the words ‘so fritto’ that in Italian translate to ‘sauteed’ or ‘lightly fried’. This traditional dish is made from thin slices of veal that are floured, fried in a pan, and then cooked with a white sauce of finely chopped garlic, parsley, pepper, white wine, vinegar, and salt. You can serve sofrito with an assortment of sides, with the most common one being french fries or mashed potatoes. 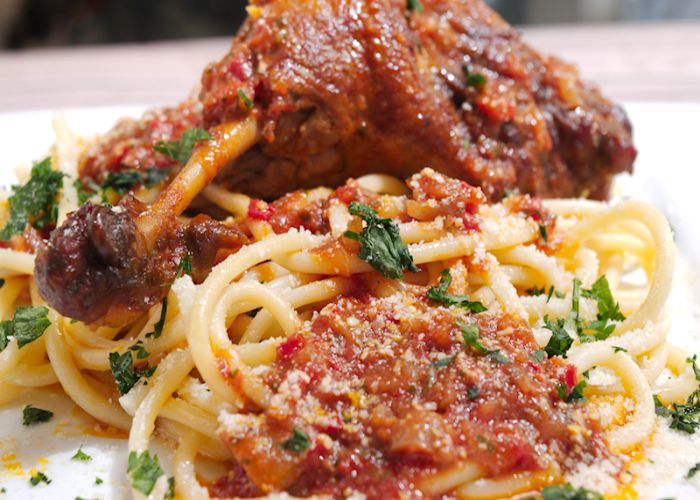 Another flagship dish of Corfu is pastitsada, which is also influenced by Italian cuisine and is nowadays usually reserved by the locals for festivities and formal meals. It is a casserole dish that consists of pasta and veal, beef or poultry, that is cooked with chili peppers, garlic, onions, wine, olive oil, vinegar, cloves, bay leaf, cinnamon, fresh or canned tomatoes, black ground pepper, and grated kefalotyri or Parmesan cheese. As with most traditional Greek dishes, there are many variations of pastitsada with the most popular featuring spicy braised beef or rooster as the meat of choice. Heavy in both nutrients and calories, it was made to protect the locals from the cold temperatures and high humidity the island experiences during winter. 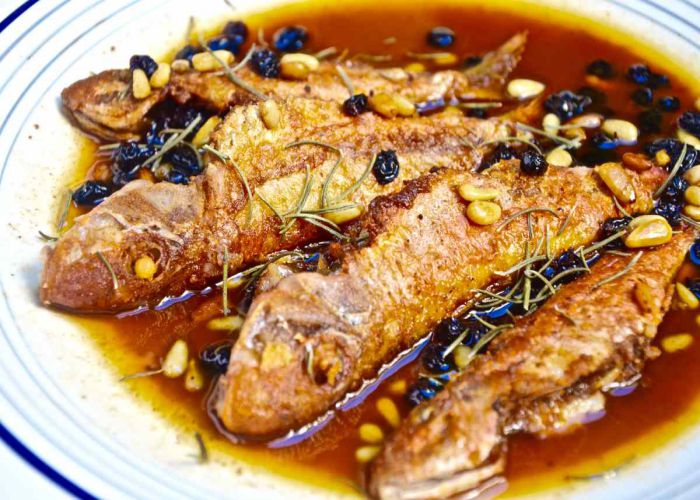 Allegedly sailors’ favorite food, savoro -or savouro- is a spicy sauce that can be found across many Greek islands under a different name and it is paired with fried fresh fish in particular. It is based on high-quality olive oil and the traditional recipe’s main ingredients are vinegar, laurel, raisins, garlic, and rosemary. If you’re a seafood lover, you’re going to absolutely love this one! 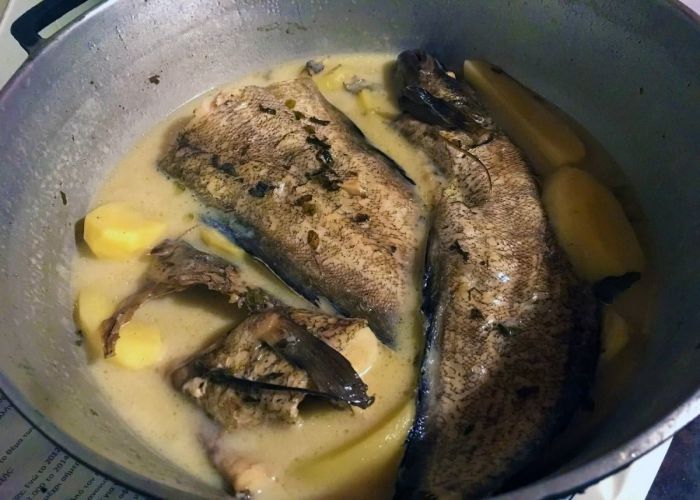 Referring to more of a technique rather than a dish itself, bianco is the traditional way the Corfians cook their fish using onions and potatoes, garlic, parsley, freshly cut pepper, and lemon juice. The name of the dish refers to the color of the sauce, which is white, while the fish that goes in it needs to be a bit fatty in order for the recipe to have a creamy texture. If you order this dish in a taverna in Corfu make sure there is enough bread on the table as the sauce is perfect for dipping! 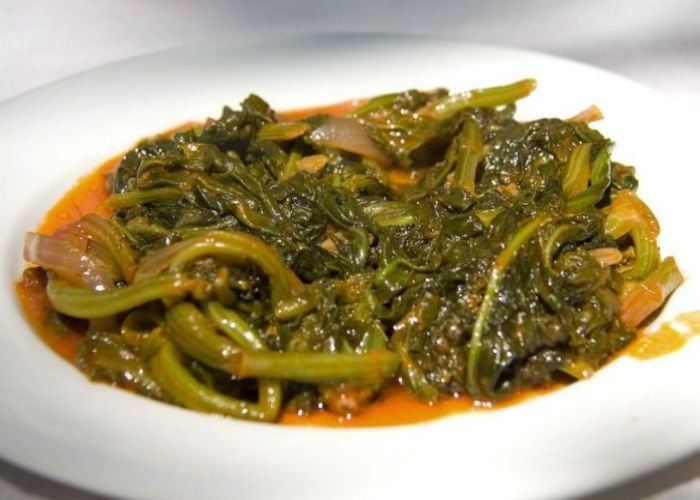 The vegetarian option of the bunch and one of the spiciest, tsigareli is a personal favorite and a staple in Corfian cuisine due to its simplicity, taste and nutritious nature. It is none other than boiled leafy greens cooked with chopped onion, garlic, red hot pepper, and salt to the taste. Traditionally the dish is meant to be very spicy, something that makes it perfect even for the winter months. The riches of the land of Corfu provide the locals with a variety of wild greens and tsigareli takes full advantage of that; you can throw in the pot absolutely and type of leafy green whatsoever and the dish will come out just as delicious! 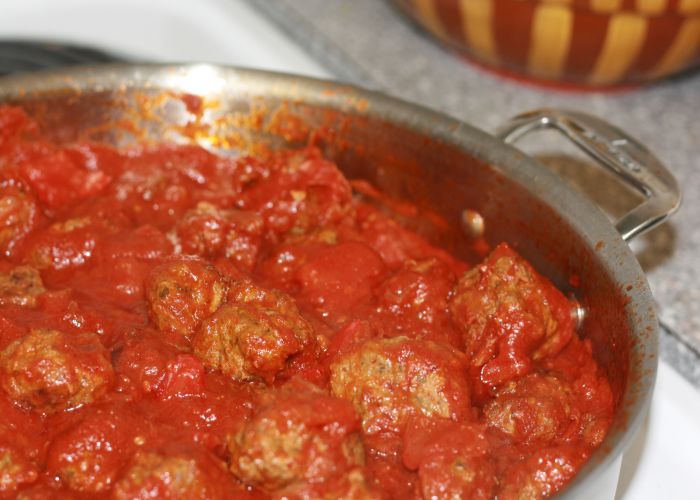 Porpetes is one of the greatest mezes to accompany alcohol as it is essentially a dish of meatballs cooked in deliciously decadent red sauce. An actual foodie’s paradise. This simple recipe calls for a number of alternatives, with one of them including a filling of anchovies, pancetta, local cheese, and nutmeg, while a different one includes the above ingredients added to the sauce instead of the meatball itself. 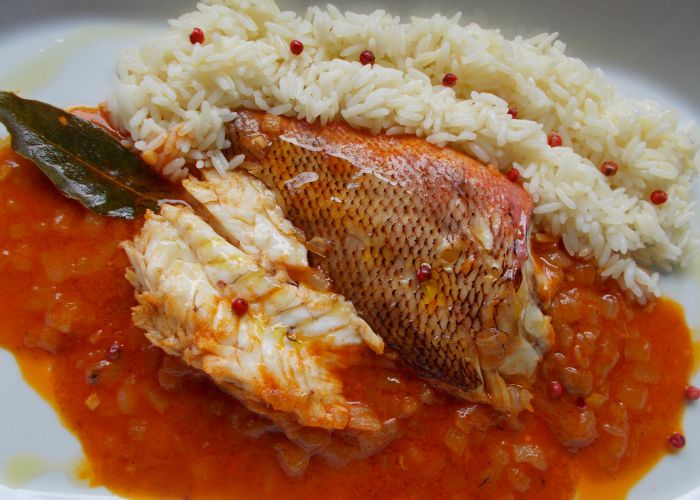 Another traditional dish with fish -after all, let’s not forget we’re talking about one of the most popular Greek islands!- the recipe for bourdeto requires roasting onions with red peppers and chili peppers and quenching the sauce with lemon. Although red in color, there are no tomatoes in bourdeto, and only the red peppers are responsible for the deep red hue. The best fish for bourdeto are generally the fish that can be found at the bottom of the sea, such as scorpions and bass, and although they should be thoroughly cleaned, they should be cooked whole; don’t remove the bones or cut them into fillets! 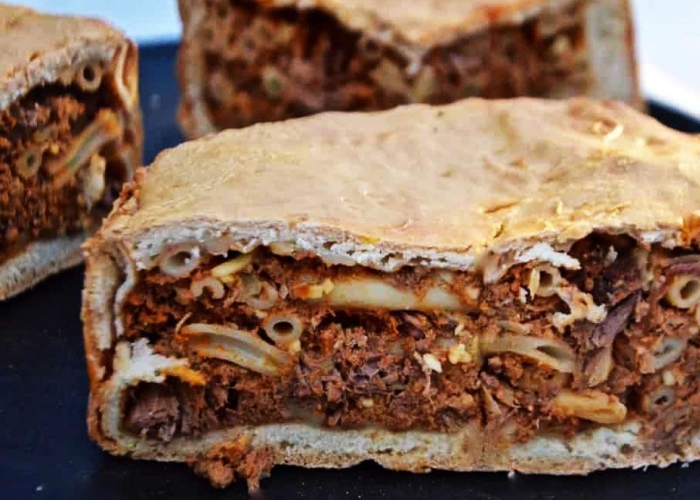 Last but not least is one of the rarest Corfian dishes, a remnant of Venetian cuisine that is rarely cooked even among the locals and one of the most extra recipes you’ve ever encountered -a dietician’s nightmare! Between two layers of dough lay well-cooked pieces of veal, rooster, lamb, pork, sausages, boiled eggs, ham, and local salami, all smothered in tomato sauce, black ground pepper, grated cheese and another layer of dough. Top it all of, there is a layer of sauce with pepper and grated cheese! The result is a feast of flavors and almost 5000 calories per serving; not for the faint-hearted and definitely not for those with high levels of cholesterol!

Due to the multicultural past of Corfu, its cuisine has been influenced by all the civilizations that have occasionally lived in the region, and most of all the Venetians, resulting in a very tasty amalgamation of cultures and flavors and the use of a number of ingredients that have been introduced to the island throughout the years. Don’t skip on tasting the incredible traditional dishes listed above to get an authentic insight into the gastronomic culture of Corfu and make your stay on the island that much more flavorsome! 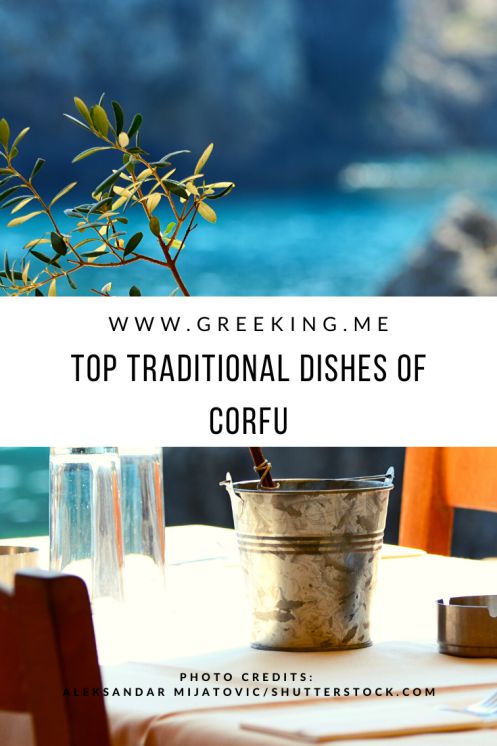