The almost 2,500-year-old Parthenon inspires and bewitches. Who could remain unaffected by its pediments and columns, its reverential view over the city of Athens, and its magnificently rich heritage that consists of stony resistance in the face of unending challenges?

But perhaps there is still more to learn about the Parthenon in the entrails of history. Here are ten facts (plus one) about the imposing monument of the Parthenon that we hope will interest and inspire you.

Kicking their steeds’ flanks with the red apples

Of their heels, right where the bulging vein
Forks and ramifies, and the sweat dripples
In rivulets down to the hooves from the belly,

Driving them with palms slapped on the withers
Where the hair is parted so the mane
Falls on either side like swan feathers,
And crowned themselves with hats or wreaths, they urge

Them on— Heat splits the earth— The cicada's throb
In the olives heralds airy victory—
Here comes the procession, the ceremonial robe;

And then with a fair and following breeze, they surge
Past, abounding wave of horses, dancing—
Galloping, cantering or prancing . . . 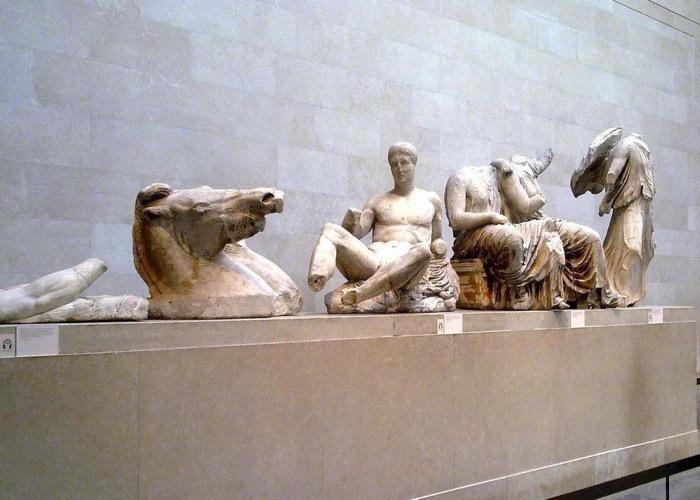 The Parthenon Marbles displayed in the British Museum - credits: bram_souffreau/flickr.com

Created to adorn the upper part of the Parthenon temple, the frieze described in the above poem by Angelos Sikelianos, one of Greece’s greatest poets, is a beautiful piece of artwork.

Some 80% of the original Parthenon frieze, sculpted in the fifteenth century, between 443 and 438 BC, remains intact, but much of it resides outside Greece.

The Parthenon sat abandoned after a series of military attacks and raids during the 1800s. In the late 19th century, the Earl of Elgin, Thomas Bruce, removed marble friezes and various other works from their original location. He transported them without the knowledge of the Greek Government to London, where the pieces are still being displayed by visitors today.

It is unclear whether Elgin had permission to remove the statues; the Greek Government has asked the British Museum to return the -now known as Elgin Marbles. Time weathering and cleaning have made the Elgin marble statues and other Parthenon sculptures look white.

Fact #2: The name-giving in ancient Greece

The name 'Parthenon' (or Parthenonas in Modern Greek) translates to ‘an unmarried women’s apartment.’ It relates, therefore, to the name of the goddess to whom the temple is dedicated, Athena Parthenos.

'Parthenos' in Greek means virgin, and the name 'Parthenon' is used to describe specifically the temple's inner chamber, a private space for the virgin Greek goddess Athena. Later, the whole temple became known as the Parthenon.

If you want to discover more about the origins of the Parthenon, and other Greek temples dedicated to Olympian Gods, join one of our Athens tours, such as the Mythology Walking Tour of Athens.

Fact #3: The history of the temple dedicated to the Greek goddess Athena 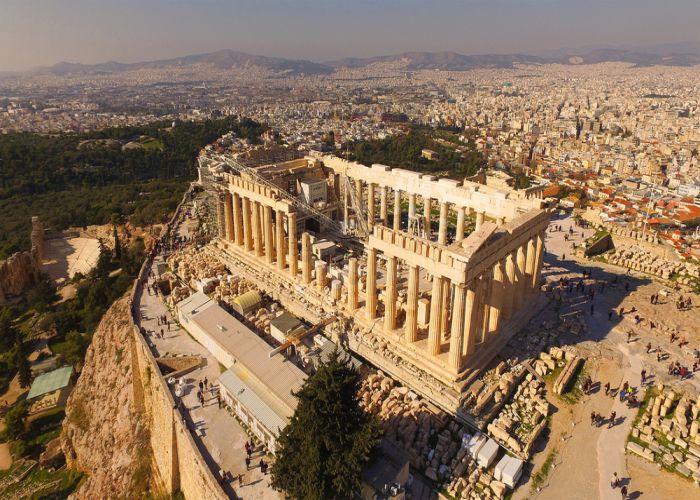 Aerial view of the Parthenon of the Acropolis - credits: Aerial motion/Shutterstock.com

The Parthenon as we know it now replaced an earlier temple dedicated to the goddess Athena, which was built in the 6th century BC.

It was destroyed during the Persian invasion of 480 BC by the army of Xerxes as his troops ravaged the city of Athens. After the defeat and expulsion of the Persians following the Battles of Salamis and Plataea, a new temple for Athena was built on the Acropolis.

This new stone monument was finished in 432 BC under the guidance of the Athenian statesman Pericles.

Fact #4: The Parthenon was converted into a Christian church

The Parthenon was converted into a Christian church at the end of the 6th century AD and dedicated to the Virgin Mary, thus becoming the Church of the Theotokos.

At that point, the orientation of the building was changed to the east pediment, as per the custom in the Eastern Church, with the main entrance now facing the west pediment.

The altar and iconostasis were installed at the east pediment, with icons painted on the walls and inscriptions added to the columns. The Church of the Theotokos/Parthenon became the fourth most important place of pilgrimage in the Eastern Roman Empire.

During the period of the Latin Occupation (1204-1261) and beyond – meaning the period of occupation of former Byzantine territories by the forces of the Fourth Crusade – the Parthenon was turned into a Roman Catholic church.

Unveil even more unknown details regarding the Athenian Acropolis by coming along with us on our Acropolis Tour!

Fact #5: The Parthenon was converted into a mosque

The Parthenon has led a fascinating religious life. In 1458, after two years of besieging a Florentine army defending the Acropolis, the Ottoman empire triumphed over Athens and converted the Parthenon into a mosque.

A minaret and minbar were installed, the altar and the iconostasis were taken down, while the paintings of Christian saints and other imagery decorating the walls were painted over.

Fact #6: The biggest destruction of the Parthenon

The greatest catastrophe to ever befall the Parthenon, however, came in 1687. A besieging Venetian force fired a mortar towards the temple – now used as a gunpowder magazine by the Ottomans – and the whole place went up in a blaze of smoke and fire.

A significant portion of the building was destroyed. The roof ceased to exist, the Ionian and Doric columns collapsed, and 60% of the Parthenon sculptures attached to the frieze fell crashing to the ground.

A year later, when the Ottoman Turks recaptured the Athenian Acropolis from the Venetians, a smaller mosque was built within the heavily damaged shell of the Parthenon. 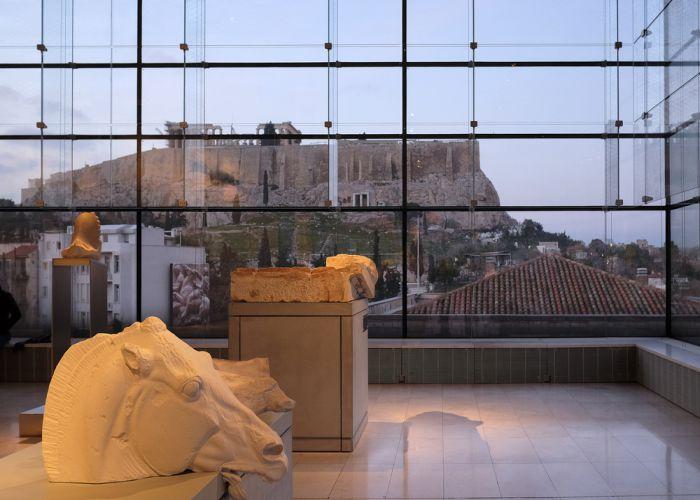 Numerous fascinating depictions of Greek mythological figures are cast on the metopes of the Parthenon. A metope is a rectangular element found between two triglyphs in a Doric frieze, and the Parthenon has – or had – 92.

You can find out all about metopes and triglyphs by going on our Acropolis and Acropolis Museum Tour. In the Acropolis Museum, you’ll also learn about things like the mythical battle between the Centaurs and the Lapiths, inscribed on the architecture of the Parthenon.

The Centaurs had been invited to the wedding of the Lapith Pirithous but got over-excited after drinking a bit too much wine. The Centaur Eurytion attacked the bride, and all hell broke loose.

Later, when Greek mythology began to morph into philosophy, the mythical battle of the Centaurs and Lapiths would stand as a metaphor for the struggle between good and evil. 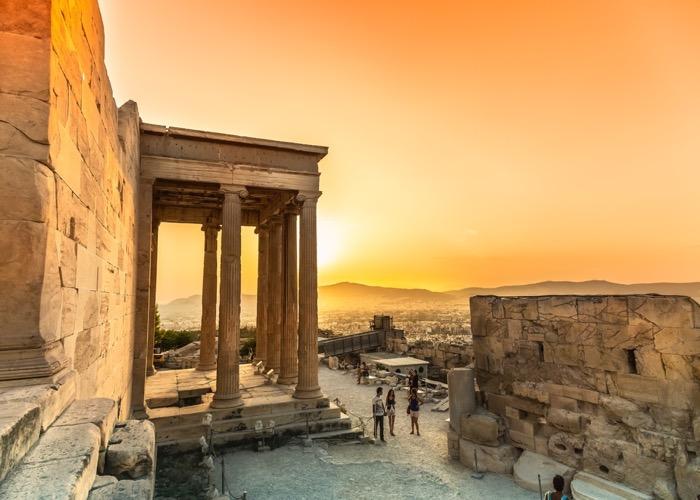 Sunset in the Acropolis - credits: LMspence/Shutterstock.com

Pericles commissioned famous Greek architect Ictinus and Callicrates and the artist Phidias to create the Parthenon, the largest Doric temple.

The Parthenon is considered the high point of Doric ancient Greek architecture. It is also the most significant temple to combine both Ionic and Doric forms.

It featured an oval plan and was built on a 33,000-square-foot base that included parts of an ancient limestone base. A small staircase around the building surrounded the front door, and the portico was built around Doric columns anchored by a tower.

There were 44 outside columns and 19 internal columns. The columns have a slightly rounded surface for symmetry.

The columns are Doric, while the continuous frieze running around the cella and across the lintels of the inner columns is Ionic. The Doric order is more simple, with the Ionic style being more elaborate.

The Doric order, synonymous with mainland Greece, represents masculinity with large, plain, solid forms. The Ionic style, in contrast, is more closely associated with the Greek islands and is more delicate in nature, while its femininity is manifested in its slender, intricate columns.

The Parthenon has served mainly as a temple over the course of its lifetime but was more versatile than many might imagine.

It doubled up, in many ways, as an art gallery and even as a treasury. The most precious commodity to be found inside the building was the colossal statue of Athena, made partly out of the melted gold of coins the Parthenon housed in its original form.

This gold weighed just over a tonne and was considered by Pericles – who commissioned the building of the Parthenon – as a vital reserve in case of emergency. Indeed, in 296 BC, the tyrant Lachares removed the gold from the statue of Athena to pay for his army.

All that remained of the goddess of wisdom, courage, and warfare were her ivory and wood embellishments.

Inscribed into the frieze running above the Doric pillars is a depiction of the Battle of Marathon – and a homage to the 192 Greek soldiers who died repelling the Persian attack there, or at least that's what some historians believe.

Unfortunately, the meaning and symbolism of the figures on the frieze are not unambiguous. However, the cavalrymen, chariot passengers, grooms, and marshals carved out of the stone do happen to equal the number of dead from Marathon, though, as related by the great Greek historian Herodotus.

Fact #11: The Marble blocks of the Parthenon 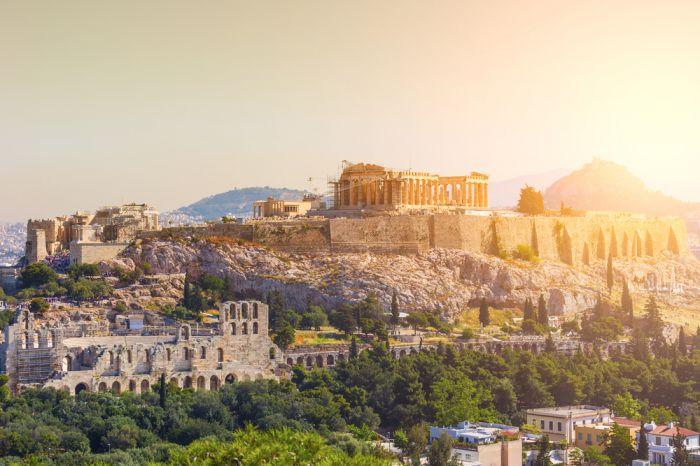 Finally, the marbles for the Parthenon came from Mount Pentelicus, some 16 kilometers away from the archaeological site.

The ancient quarry of Mount Pentelicus is today protected by law and used for the restoration work done to the Parthenon, along with other ancient structures on the Acropolis.

In the 1970s, Greek authorities and the archaeological committee began serious work to restore the rapidly-degrading Acropolis. They commissioned Acropolis restoration projects.

At his direction, the committee meticulously charted all the ancient treasures of the site and applied computer technologies for its identification.

The restoration team supplemented the original Parthenon artifacts and continues to do so with new materials that have been weather-resistant and corrosion-resistant to support the integrity of its construction.

What is the Parthenon, and why is it important?

The magnificent stone temple of the Parthenon was built from 427 to 42 BCE at the height of the era when the Greek empire ruled the world. The Parthenon, built for goddess Athena, sits on top of one temple complex called the Acropolis rock.

Who was the Parthenon built for, and why?

It is primarily designed as a temple based on the goddess Athena, the most important god of the inhabitants of Athens. Construction began in 470 BC and lasted from 436 BC to 638 BC. The design and construction of the decoration lasted several years until 432 AD.

Why was the Parthenon destroyed?

Among its many roles over the years, the Parthenon also served as the Acropolis' munitions storage site during the 17th-century Morean War. As a result, the bombing of the area caused massive damage to Parthenon, whose surviving sculptures can be found in the modern Acropolis Museum and the British Museum.

As you have probably already figured out, the Parthenon hides more than meets the eye, which makes it the number one destination for your trip to Athens. It is just like visiting Centennial Park, the fictitious park in the Superman mythos.

Embark on an adventure through time, history, and mythology. Take our advice by reading our Athens travel guide, and you'll be rewarded with a head full of knowledge and a heart full of memories!

More in this category: « 5 reasons to participate in a Greek folk dance lesson || Mikis Theodorakis – Composer, Activist and Patriot »
back to top