I don't mean to brag, but the Greeks have an admirable way of combining the best elements of their culture and turning them to larger-than-life parties! A bright example of this genius technique is the institution of panigiri -or panigiria in plural- the Greek fairs with a religious origin that entertain the locals all year round. Explore this Greek custom and learn about the best panigiria to visit during your stay in Greece!

1. The fair for St Paraskevi in ​​Dotsikos, Grevena

2. The fair for the Transfiguration of Jesus in Kalyvia

3. The fair for the Transfiguration of Jesus in Kalyvia

4. The fair for St. Matrona in Santorini

A Greek panigiri is a type of fair or festival that celebrates the patron saint of the region it is held at with traditional Greek music, lots of dancing and large amounts of food. Leave it to the Greeks to make religious events all about laughing, dancing and eating delicious dishes! The most amazing panigiria take place in the Greek countryside and the Greek islands, where they are perceived as the ‘event of the year’ and people prepare for them months in advance.

During a panigiri, people gather around the church dedicated to the patron saint or at a central square of the area after dusk. Usually, vendors selling traditional dessert, such as loukoumades, and all kinds of bits and bobs, such as jewelry and paintings, flood the surrounding streets, where people stroll around, buying souvenirs and enjoying the company of one another. 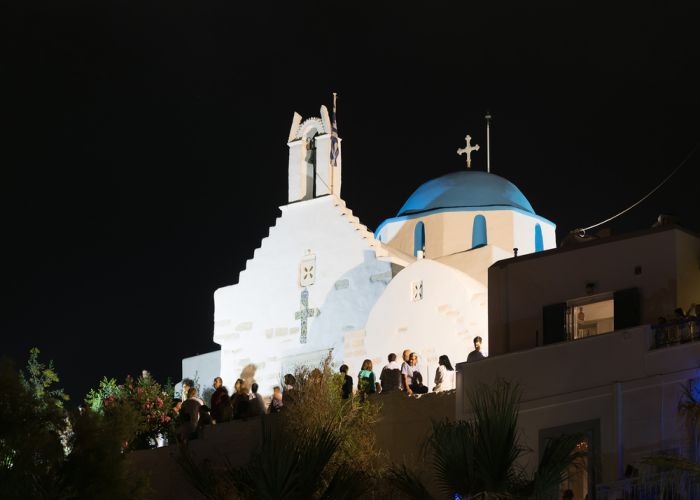 At the countryside and islands, panigiria are less about shopping and more about dancing. There, people gather in an open-air space, eating, drinking and dancing to the tunes of traditional Greek folk music playing live from a band until the early morning hours.

The best and most popular Greek fairs take place during the summer, with the celebrations for the ‘Assumption of the Virgin Mary’ on August 15, marking the peek of the season. If you’re considering visiting a traditional panigiri during your stay in Greece, we strongly suggest the ones below:

The fair for St Paraskevi in ​​Dotsikos, Grevena

On July 26, the village of Dotsikos in Grevena hosts a truly traditional Greek fair, celebrating the memory of St. Paraskevi. The residents climb to the chapel of St. Paraskevi, situated on a hill above the village, to watch the Divine Liturgy. Then, in the church’s yard, which is decorated with a plethora of oak trees, they eat traditional homemade food the families of the village have brought while a Greek folk band sings and plays traditional Greek instruments, such as bouzouki and a clarinet, going around the tables. Once the band settles on stage, people start singing acapella a specific song written for the fair, in unison. Both the food and the vibe are out-of-this-world!

The fair for the Transfiguration of Jesus in Kalyvia

On August 6, in Kalyvia, a village-esque suburb of the eastern side of Attica, we celebrate the Transfiguration of Jesus Christ. The fair begins from the morning of August 5th, at the central square and it is one of the most popular panigiria in the region. Following the Divine Liturgy, offered by the church,  the Municipality of Saronikos prepares a feast with live music and dance groups. The fair is kept as traditional as possible, with traditional Greek folk music blasting through the speakers and local delicacies provided by the surrounding taverns to the guests. 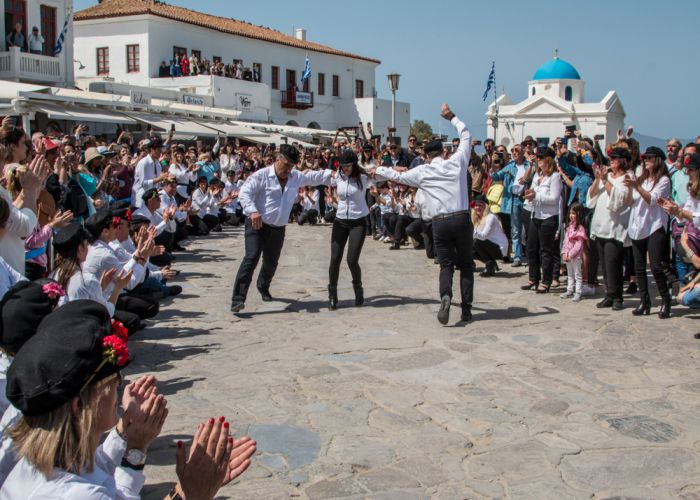 The fair for the Transfiguration of Virgin Mary in Ikaria

A personal favorite, the fair that takes place on August 15 celebrating the Transfiguration of Virgin Mary in the island of Ikaria, is hands down a must for a consistent traveler - not a tourist- when looking for local ways to entertain themselves in the summertime. It is the most famous panigiri of the Aegean, and perhaps all of Greece. Thousands of people, young and older, gather in the village of Yakari. With the main dish of pot-cooked goat and plenty of with plenty of local red wine, the fun never stops. No, really, it never does; the last dance called ‘piperia’ -which translates to ‘peppercorns’- is known to transpire at 10 o’clock in the morning. Yes, you read that right. Join the crazy -in the best possible way- locals and dance the traditional dance of the island, Ikariotikos. Don’t worry if you don’t know the steps, there are plenty of willing locals to teach you!

The fair for St. Matrona in Santorini

The most popular fain in Santorini, takes place on October 20 and celebrates St.Matrona the temple of which was built on the settlement of Finikia in 1859 and is known for the iconic palm tree that decorates the temple’s yard. On the eve of the celebration, an evening Liturgy takes place. Right across from the church, in a beautiful old building with a spacious courtyard, two large cauldrons, one consisting of various meats and consisting of rice, are set up. The feast lasts until the morning and for the enrichment of the musical stimuli, the surrounding islands contribute more local instruments to the celebration, such as tsabounes and toubakia.

Panigiria offer the perfect reason for the local population to come together, while at the same time, they contribute to the preservation of the customs and traditions of the country. If you want to experience Greece like a local, we highly suggest you put a visit to one of them in your itinerary; It doesn’t get any more Greek than that! 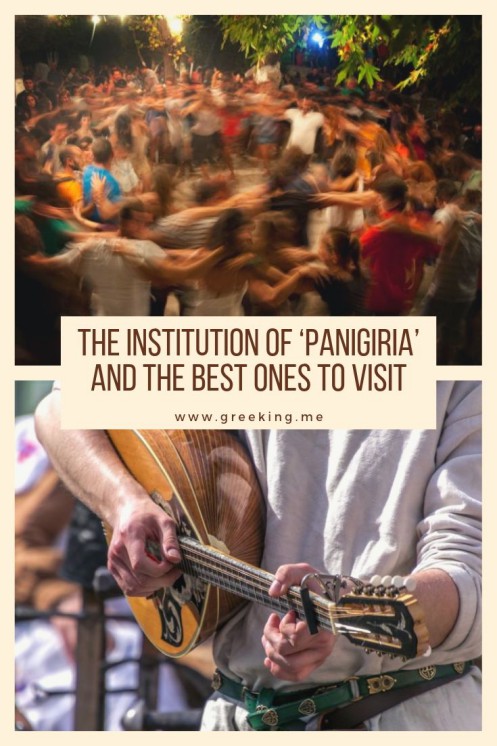 More in this category: « Greek Icons: Tsarouchia, the Evil Eye and the Wise Owl || The Farmer's Market Tradition in Greece - Laiki Agora »
back to top

1. The fair for St Paraskevi in ​​Dotsikos, Grevena

2. The fair for the Transfiguration of Jesus in Kalyvia

3. The fair for the Transfiguration of Jesus in Kalyvia

4. The fair for St. Matrona in Santorini