World-famous destinations, such as Mykonos and Santorini, are instantly recognizable in photographs thanks to their distinctive architecture. Influencers love to be photographed in front of whitewashed island houses with blue touches and doors. But why are the houses of the Greek islands blue and white colors?

1. As a way of cooling the Greek island houses in the summer

2. How cholera affected the design of the houses

3. What about the blue color of the houses of the Greek islands?

4. The military dictatorship imposed the coloring of the Greek islands

5. White and blue on the Greek flag

Many people recognize blue and white as the emblematic colors of Greece. They are the colors of the flag. They are also the bright sea and sky colors synonymous with the beautiful Mediterranean.

However, in the Cycladic islands, the houses' characteristic blue and white color is not based on the symbolism of the colors within Greece. In fact, there were several reasons behind this emblematic feature of Greek island architecture, and most of them were pretty practical.

With the iconic island houses of Greece standing proud under the bright sky and the Mediterranean sun, the choice of using blue and white seems almost natural.

However, at least initially, the picturesque buildings of the islands in Greece had to be "painted" with these colors not for aesthetics but of necessity. Keep reading to find out why! 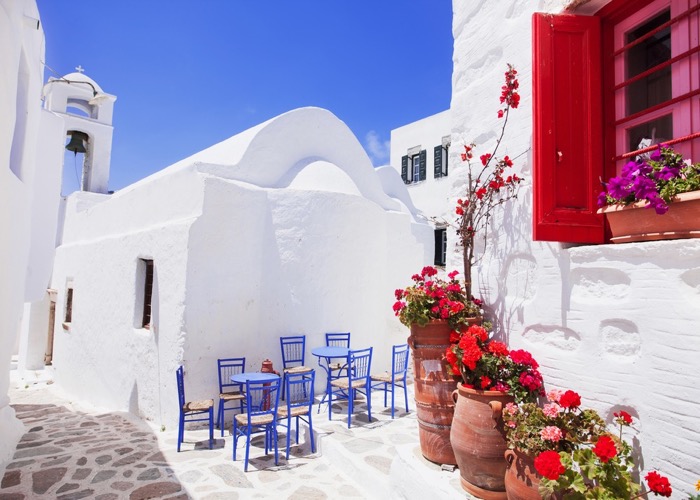 Many houses on islands such as Mykonos, Paros, and Naxos were initially built of stone. This was a practical decision, as there was little wood in the rocky island landscape of the Aegean.

However, the stones were usually dark in color. This was a problem during the sunny Greek summers. The dark rocks absorbed the sunlight that fell on the houses, making the interior unbearably warm.

Thus, the inhabitants began to paint the stones white in an attempt to cool their interiors. The process worked, resulting in the houses on the islands being cooler and more comfortable.

Moreover, the houses' white color also protects the environment. According to the Lawrence Berkeley National Laboratory in California, if the roofs of houses were painted white, the temperature of the cities would drop significantly, and the harsh effects of climate change would be postponed for a while.

How cholera affected the design of the houses 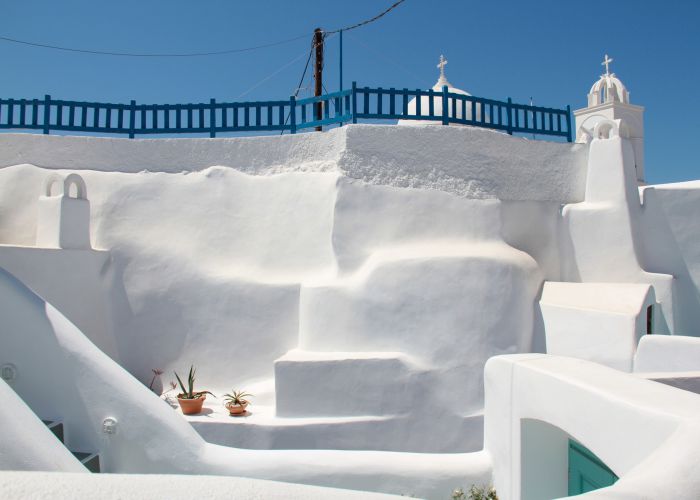 Then, in 1938, a national decree accelerated the spread of this new aesthetic design. At that time, Greece suffered from a cholera epidemic during the dictatorship of Ioannis Metaxas. To curb the disease, he ordered citizens to whitewash their homes.

This may sound strange today, but back then, the pain of the houses contained limestone. Limestone is a powerful disinfectant, and not many others were widely used at that time. Thus, Greek citizens whitewashed their homes to disinfect them and reduce the spread of cholera.

What about the blue color of the houses of the Greek islands? 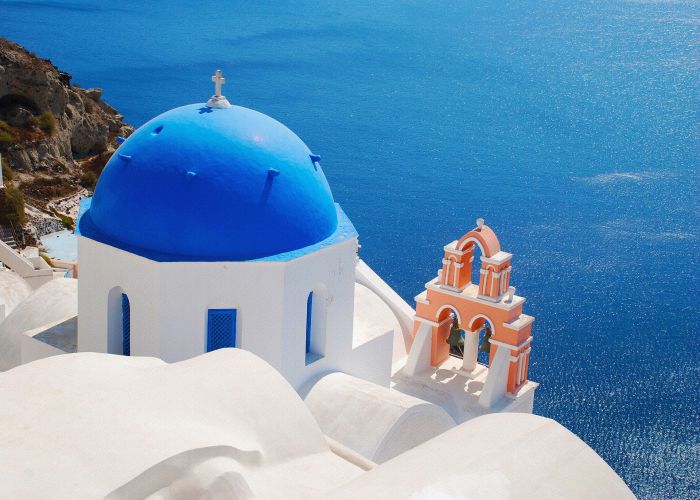 Although blue is the most common color for doors and shutters in the islands of the Cyclades, it is not the only one. In fact, if you walk on many islands, you will notice tones of red, green, and brown in addition to blue. However, the vivid blue color still dominates the Cycladic landscape. Why is this happening;

Well, that has to do with cost. After painting their boat, the fishers and other sailors painted their windows and shutters with whatever was leftover. And because of the elements used to create it, blue was usually the cheapest paint color.

The blue used in the islands' houses in the blue Aegean sea was made from a mixture of limestone and a cleaning product called 'indigo.' The indigo was a type of blue talc that most of the islanders easily had at home. Therefore, blue was a very easy color to make.

The military dictatorship imposed the coloring of the Greek islands. 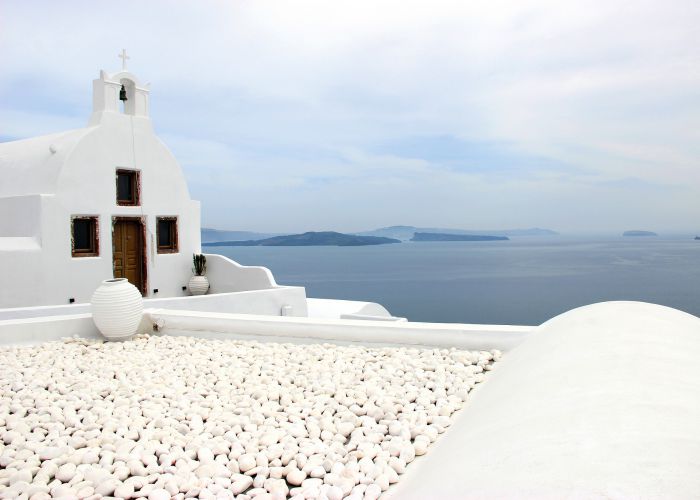 The beautiful colors of the houses of the Greek islands became mandatory during the military dictatorship that occupied Greece in 1967.

The regime believed that the colors inspired patriotism and reflected Greek nationalism. Finally, in 1974 they passed a law that imposed the painting of houses on the Greek islands in blue and white.

Although these regulations have now been relaxed, the blue and white colors of the Greek islands have become a massive attraction for travelers.

As a result, many islanders choose to keep them. Eventually, this is done both for the practical reasons they started using these colors and are good for tourism.

Wandering today in the Cycladic islands, visitors can easily find houses with authentic stones in the color of the earth or slightly different colors. However, blue and white still dominate the design of the Greek islands, as well as the image that people around the world have of the Greek islands.

White and blue on the Greek flag 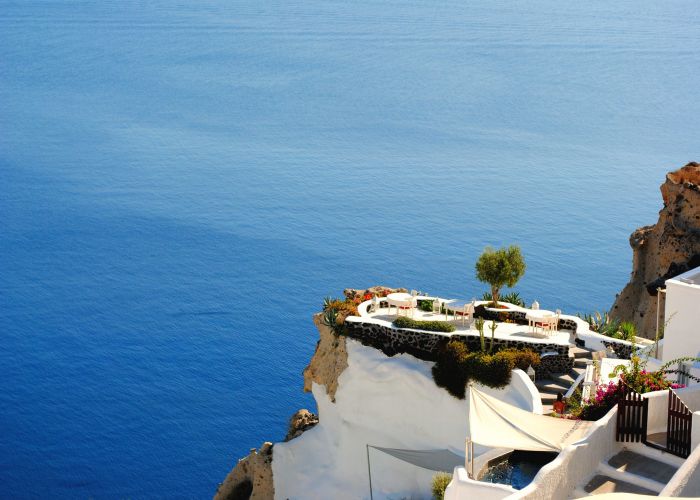 As you know, the Greek flag consists of the cross, the symbol of the Orthodox religion, and its colors are blue and white. The choices of the above were not random but had their significance. So do you know why the flag has nine stripes and is blue and white?

Back at the National Assembly in Epidaurus in 1822, blue and white were introduced as the colors of the Greek flag.

It is speculated that they avoided red and green because they were associated with the Islamic Ottoman Empire. According to another theory, the color choices were made to symbolize the blue of the Aegean Sea and the white of the waves. 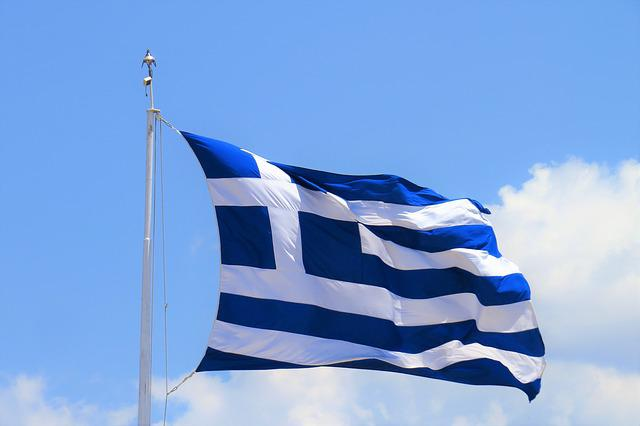 Also - regarding the white color - it is claimed that it indicates the pure purpose of the Greeks with their sole goal of liberation and independence of the nation.

Surprisingly, the consistent design of the houses has nothing to do with the meaning behind the colors of the Greek flag. They all form beautiful scenery, dare we say Instagrammable, but the truth is not so viral. The rich heritage of Greece hides a world of fun facts most people are unaware of. 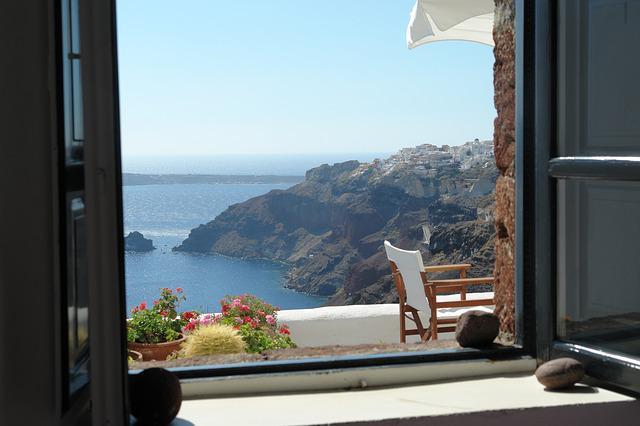 Now that you know the secrets behind the trademark colors of the Greek islands, it's time to book your trip to them to get a first-hand look, don't you think?

The Greek orthodox church blue domes and the white of the Greek island houses are good enough to entice you. After all, the brightness of the white and blue color scheme emits an optimistic image and sets the mood for an idyllic vacation!

More in this category: « 'This is Sparta': The Story of the Ancient City || The Celebration of Clean Monday in Greece »
back to top

1. As a way of cooling the Greek island houses in the summer

2. How cholera affected the design of the houses

3. What about the blue color of the houses of the Greek islands?

4. The military dictatorship imposed the coloring of the Greek islands

5. White and blue on the Greek flag