Paros is the second-largest island in the Cyclades after Naxos island, and its beauty matches its size. It lies within the center of the pristine Aegean Sea, and it is a hilly island filled with a number of vibrant Cycladic villages and an impressive coastline, where one golden beach is better than the next one.

Here is an overview of the Paros villages that are worth your time during your stay in Paros, and will contribute to making the island your favorite destination around the world! Their traditional character and stunning looks are impossible to resist! 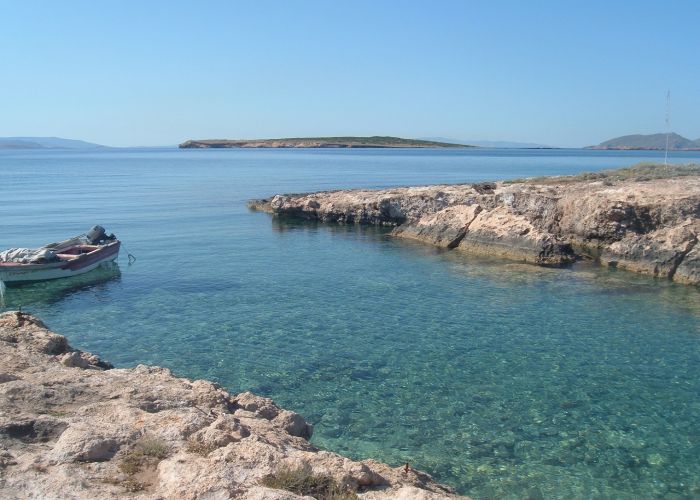 Agkairia village is located 12 km from Parikia, and close to the incredible yet small golden beach of Tripiti, and those of Glyfi, and Lolandoni.

Agkairia is an area with a lot of greenery -which is not common for a Cycladic landscape- and if you are fond of hiking you can practice your sport in a stunning setting by heading to the Holy Monastery of Agioi Theodoros, which is located at a distance of 4 km northeast of the village.

From there, you can continue for another 1.5 km to the chapel of Agios Georgios. Also on foot from Agairia, in an equally beautiful environment, you can go to the monastery of Agios Ioannis Spiliotis. 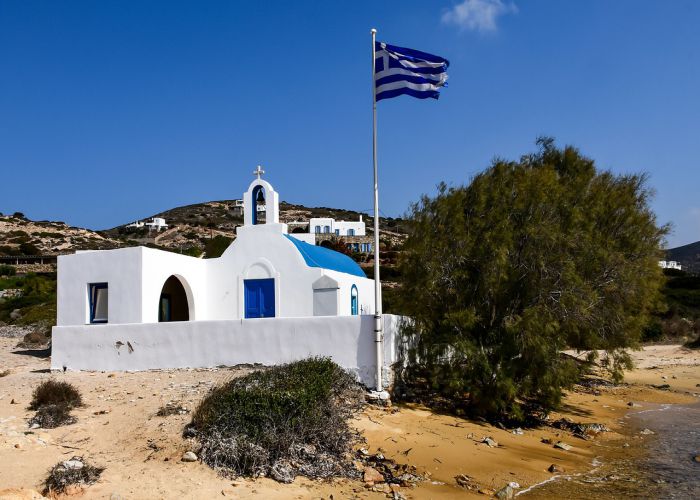 The village of Kostos is 7 km from Parikia, the heart of things to do in Paros, at an altitude of 160 m. Notable events of the village are the three major festivals held during the summer months in memory of Athanasios Parios on June 24, Saint Marina on July 17, and Saint Panteleimonas, the patron of the village, on July 27.

The entrance of the village dominates the monument of Athanasios of Parios, who developed a great literary activity and taught in various regions of Greece during the critical moments of the Greek Revolution.

It is worth visiting his house which is located south of the church of Saint Panteleimonas. The visitor can walk through the narrow white alleys of the village and has the opportunity to enjoy cool summer moments in the traditional cafe of the paved square. 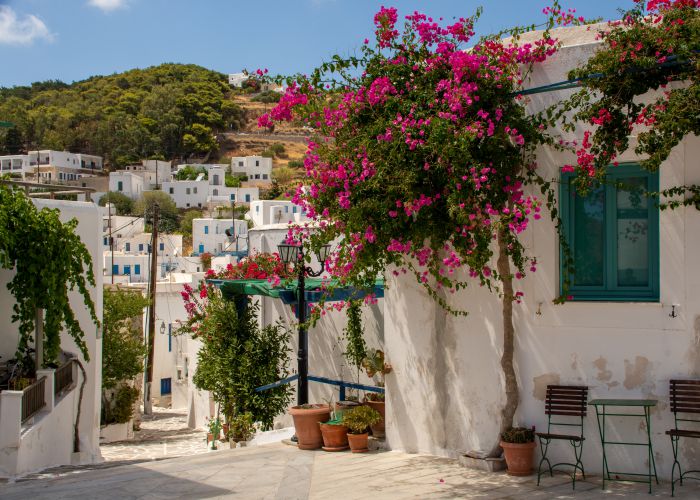 Lefkes, 11 km from Parikia, is a beautiful, green mountain village built amphitheatrically in the center of the island at an altitude of 250 m.

It is a quintessential traditional Cycladic village that has not been altered by the onslaught of tourism and remains the one it was in the middle ages. Traditional whitewashed houses, marble-paved alleys. In it, you can see examples of popular architecture that harmoniously marry neoclassicism with Aegean aesthetics.

The church of Saint John the Baptist is decorated with post-Byzantine icons that existed in the old, small churches as well as newer creations by well-known Parian painters and hagiographers. It is celebrated on August 29, so a festival is organized in the evening.

Apart from the imposing church of the Holy Trinity, small churches scattered throughout the village, hidden in alleys, compete in interest and looks with each other. 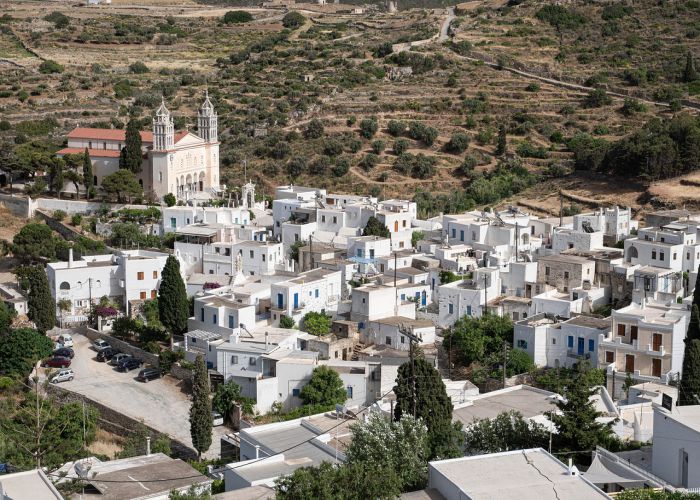 Today, approximately 800 residents live permanently in Lefkes. That however doesn't stop the beautiful village from having a strong presence in the island's cultural events.

In Lefkes there is a remarkable folklore museum, in the center of the village. What's more, at the entrance of the village, there is a pottery workshop that has been creating wonderful designs inspired by the folk tradition of the island.

In Lefkes there are hotels, rooms for rent, cafes, and famous taverns serving local delicacies. The village can become an ideal starting point for those who want a peaceful holiday.

Please keep in mind that in order to explore the picturesque Lefkes, you will need to park your vehicle in the parking lot, at the entrance of the village, and stroll it on foot. 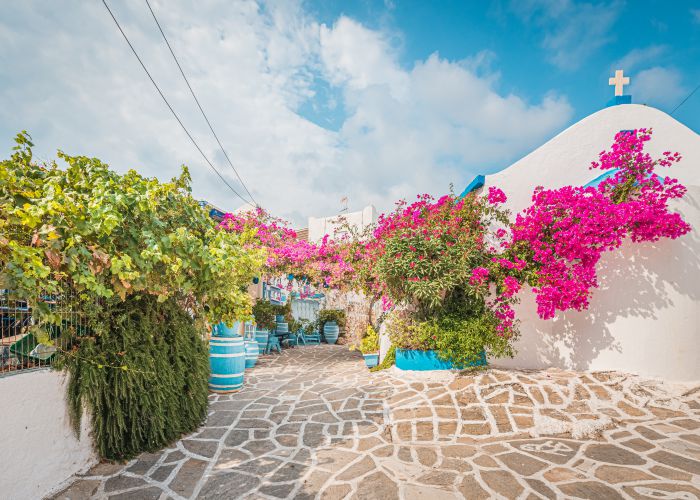 At a distance of 5 km from Lefkes, you will come upon Prodromos, a picturesque village with always freshly whitewashed streets, white houses, beautiful churches, and notable monasteries. Prodromos took its name from the church of Saint Ioannis Prodromos, a 17th-century building. Traditional cafes and taverns operate in the village.

For those who love hiking, the Byzantine path that connects Lefkes with Prodromos village offers a unique route lasting approximately 1.5 hours. The path was built 1000 years ago and is paved for the most part with large marble slabs.

On Good Friday at noon, after the crucifixion of Jesus, the local club offers everyone the traditional Lenten chickpeas with octopus. On the night of Good Friday and during the procession of the epitaph, children and young people of the village revive the Passion of Jesus with reenactments.

On June 24, the day celebrated by the church of the same name, the custom of Klidon is also revived (burning May wreaths, carrying the pitcher with the silent water, traditional dances, etc.). On July 27, Agios Panteleimonos, the village square hosts the traditional festival. 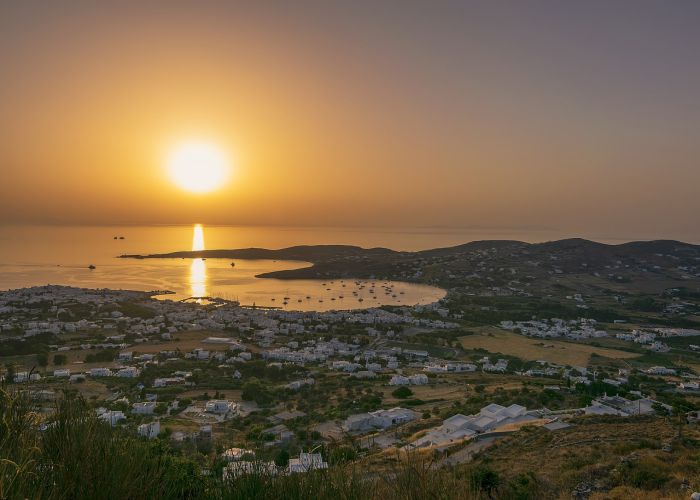 Ampelas is a beautiful coastal village you should visit during your stay in Paros island, especially if you want to find yourselves in one of those postcard-like landscapes of turquoise waters, and fishing boats, as it boasts a small picturesque harbor and is ideal for a peaceful and quiet vacation.

On its small and not-so-famous Paros beaches, you will find taverns that mainly serve fresh fish and all kinds of seafood. Ambelas is a small yet beautiful traditional settlement, located east of Naoussa, about three kilometers away. 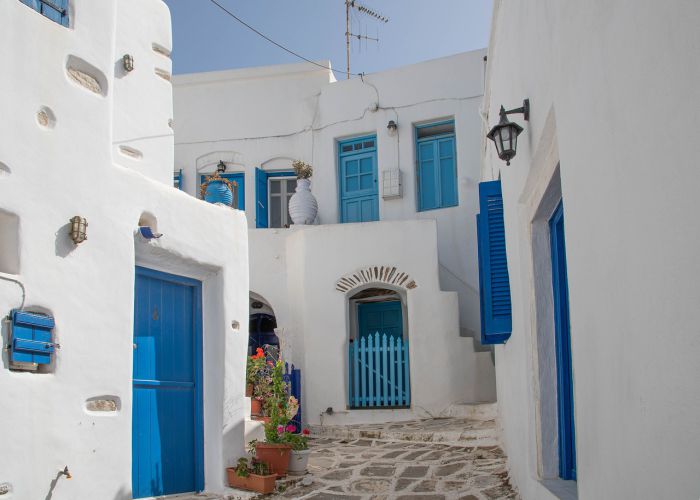 In the picturesque settlement of Marathi, 5 km northeast of Parikia, we find the ancient quarries of 'Paria Lithos.'

Large galleries with a total length of almost 200 m extend to a great depth and are accessed by three entrances. To the left of the southern entrance, there is a Hellenistic relief with beautiful representations that are partially preserved and with an ancient inscription, dedicated to the Nymphs, deities who were worshiped in the area, from which the quarry took its name: 'Quarry of the Nymphs.' Many columns supporting the arcades, several staircases, retaining walls, and a good number of marble pieces are still preserved today.

'Paria Lithos' is still the subject of study and admiration worldwide. 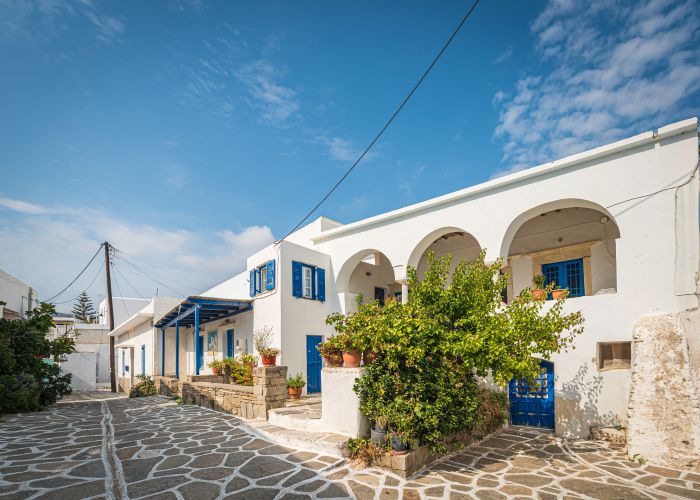 The village of Marmara got its name from the multitude of marble -or 'marmara' in Greek- that decorated its mansions and temples.

Today, it is one of Paros'most beautiful villages, with whitewashed houses, flowery courtyards, and a friendly and traditional atmosphere.

Its churches are countless and they are all kept in excellent condition. They are all built with parts of ancient temples of the area. The visitor can still admire the marble troughs, where the women of the village used to wash their clothes.

The plain of Marmaras is the most fertile agricultural production area of ​​Paros, which was once an immense olive grove that was burned by the Venetians. All the way from the plain of Marmaras to the golden beach of Molos, you will come across meadows, small fenced orchards of reeds, and wicks.

If you find yourself at the Church of the Assumption on Good Friday, which will mean that your stay in Paros has been scheduled for Easter, you will have the opportunity to witness the procession of the epitaph through the narrow streets of the village unfolding the days of Christ's Passion with reenactments of the Last Supper, the Crucifixion of Jesus, etc., by young men and women of the village.

On September 7, the eve of the feast of Pera Panagia, various festive events are organized by music and dance groups in an event that is brimful of traditional snacks and local wine. 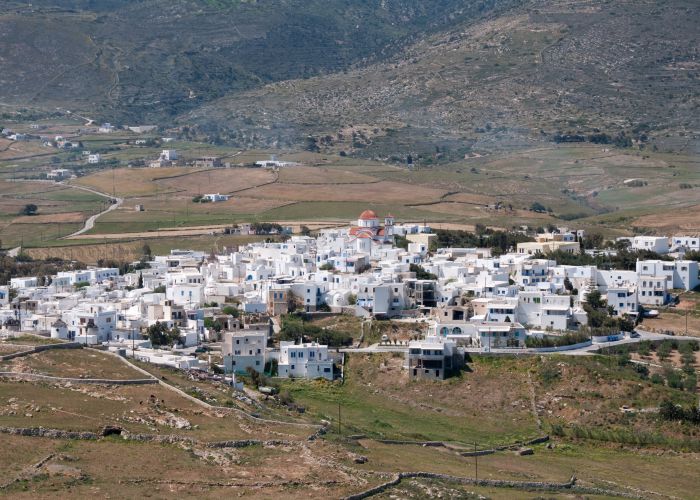 The village of Marpissa bears the mythological name of the daughter of the king of Aetolia, Euenos, as mentioned by Homer in the Iliad, which was the "apple of contention" for the god Apollo and Ida, the king's son of Messinia.

Marpissa is built amphitheatrically on a verdant hill covered in greenery with an altitude of 40 m, a short distance from the sea, 17 km east of Parikia. It is a village with beautiful 16th and 17th-century houses, picturesque windmills, and traditional churches, with a mild climate, interesting architecture, and priceless artistic treasures.

Relatively modern, built in 1960, is the Metropolitan Church of Metamorfosi, which follows a Byzantine style, with a domed roof and walls covered with tiles. Next to it, are the Byzantine Museum and the Sculpture Museum of N. Perantinos. In the square of Agios Nikolaos, you will find the fascinating Folklore Museum.

To the east of Marpissa rises the hill of Kefalos. In Kefalos, there are the ruins of the Venetian castle of NikolaosSomaripa. The 16th-century monastery of Saint Antonios is there today in very good condition. Ancient capitals can be seen in the courtyard of the church, while the pulpit of the church rests on an inverted archaic capital. In addition to the ruins of the Venetian castle, ruins of temples from the beginning of the 15th century can be seen in the area.

West of Marpissa, on top of the mountain, is the 16th-century monastery of Saint Georgios Lagadas. The monastery was recently renovated and can be visited. If you find yourself in the village on Good Friday, you will be impressed by the representation of the Passion, while on Easter Sunday an authentically Greek revelry takes place.

The central festival of Marpissa is that of the Transfiguration of the Savior on August 6, when various cultural events are organized. 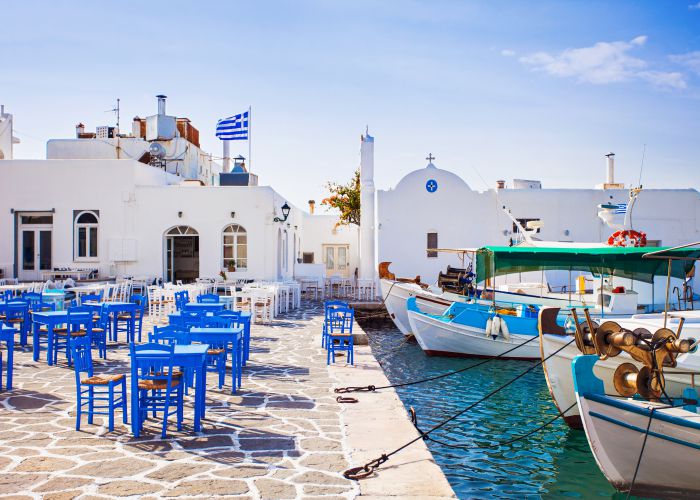 Piso Livadi is a small fishing village a couple of kilometers from Marpissa and 19 km south east of Parikia.

Originally an isolated small village, Piso Livadi has now transformed into a tourist hub, with excellent infrastructure to attract a larger number and a wider variety of visitors.

Piso Livadi is famous for its Greek cuisine. From its tiny harbor, daily tours take place for Naxos and other Cycladic islands.

South of Piso Livadi there's the excellent beach of Chrysi Akti, considered one of the finest beaches of the Mediterranean. 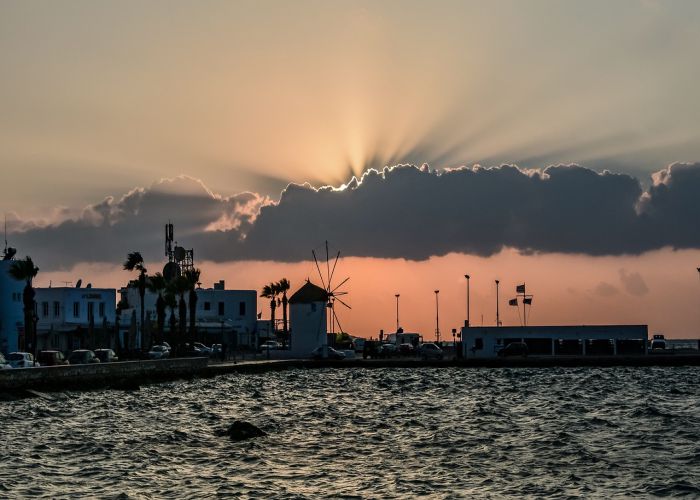 The village of Alyki is similar to Piso Livadi; a small fishing village with small ports full of fishing boats, overlooking Antiparos island and making your stay in Paros a feast for the eyes.

Alyki is famous for its sandy beach, but also the exquisite pubs along the coastal road serving fresh fish and tasty local wines. It also has several hotels, restaurants, coffee bars, and even the famous Skorpios Folklore Museum. 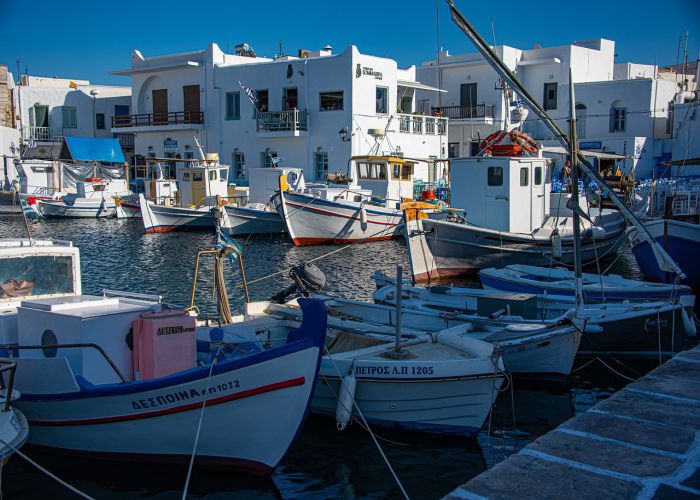 Its good road network can easily take you from one settlement to another, while the island's good signage, as well as the smoothness of its roads, call for a thorough exploration of either its coastal or mountainous, but definitely beautiful, villages.

Now you have all the information you need to make your trip to Paros memorable. Beat the gun and book your trip to this magical island!

More in this category: « Naxos Food Guide; A Dive Into Greek Island Gastronomy
back to top