Are you planning your trip to Meteora and you want to learn about the history and the monasteries of this spectacular place? This short Meteora guide will properly introduce you to the six still operating monasteries of the region so you’d be ready for your visit!

2. The Grand Meteoron and the Varlaam Monastery

3. Saint Nikolaos Anapafsas and the Monastery of the Holy Trinity

5. What you need to know before visiting the Meteora monasteries in Greece

Meteora is a natural landmark located in the region of Thessaly. Hidden deep in the Greek mainland, these rock formations were born 65,000,000 years ago and their current state is a product of millions of years of seismic activity, erosion and corrosion. Archaeological research in the area showed that Meteora hosted early human settlements some 50.000 years old.

The location where most of the discoveries were made was the cave of Theopetra, where Mesolithic artefacts and human remains were found buried under the cave’s floor. More evidence from the site provides valuable information concerning the replacement of Neanderthals by modern people and the transition from a hunting-gathering economy to a farming based one, after the end of the last Ice Age.

Interestingly, the existence of Meteora is not mentioned by any ancient source or by any ancient traveller such as Herodotus, Strabo or Pausanias. The first accounts for this natural landmark come with the influx of monks, probably during the 9th-10th century CE that chose this area as a monastic centre.

These first monks that arrived in the area were practising eremitic monasticism firstly founded in the 4th century in Egypt. Rejecting secular life, men and women could join monasticism after having the ceremony of koura. After their initiation, their main concern in life was the constant try of communication with God.

In order to achieve that they denied their former properties and any secular symbols, such as their everyday clothes. Through a process of fasting, constant praying and low-calorie diet they withdrew from the world seeking for a place of isolation.

Their home had to have three main characteristics: it should be away from any sign of civilization and close to God’s wilderness. In addition, the monks had to be sure that their new home was inaccessible enough to deter any visitors or unwanted interactions. Lastly, this place had to be as simple as possible since it would only serve the monk as shelter from nature’s elements. Meteora had it all.

Monks flooded the area and climbed the vertical rocks in order to find fissures or small caves to make their hermitage. Quickly enough, Meteora came to be one of the most dynamic monastic places to be found in Greece along with the region of Mount Athos.

In the 14th century though, Athanasios Koinovitis, a monk from the Monastic State of Mount Athos, reached Meteora along with a group of other monks and introduced the concept of cenobitic monasticism. From then on, these two types of monks co-existed in the area and the construction of the big monasteries still to be found today started.

The Grand Meteoron and the Varlaam Monastery 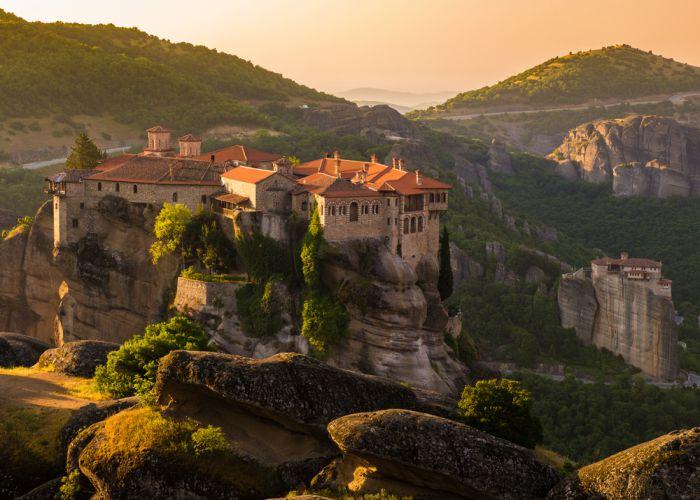 This is the largest male monastery of Meteora and the first one of the region. Its construction started in the 14th century CE after the coming of the monk Athanasios Koinovitis. He and the monks that accompanied him climbed to the top of the Broad Rock, the largest plateau of the Meteora Rocks and built a church dedicated to Virgin Mary.

This Meteora monastery faced numerous phases of expansion and gradually came to be one of the most important monastic centres of the Eastern Orthodox Church.

Until the 16th century the only way of entering the monastery was through a system of retractable wooden ladders but then the monks built a tower at the entrance which hosted a winch mechanism that allowed the transportation of people and goods with the help of a net. This was the only way of entrance even after the end of WWII.

Today the visitor has the chance to visit the monastery not by hanging in a net but by following a staircase carved in the bedrock of Meteora. Do not miss the chance to visit the tower of Grand Meteoron, wander around its publically accessible places, and get amazed by the murals of the 14th and 16th century covering the walls of the churches that lie behind the high walls of the monastery.

At the closeby monastery of Varlaam, the second biggest monastery in Meteora,  the visitor can sink into Greek-Orthodox spirituality just by looking at the frescoes of the Katholikon, a work of the noted painter Franco Katelano, covering every inch of the building’s interior walls. The monastery of Varlaam also has a great compact museum about the history of Meteora.

Saint Nikolaos Anapafsas and the Monastery of the Holy Trinity. 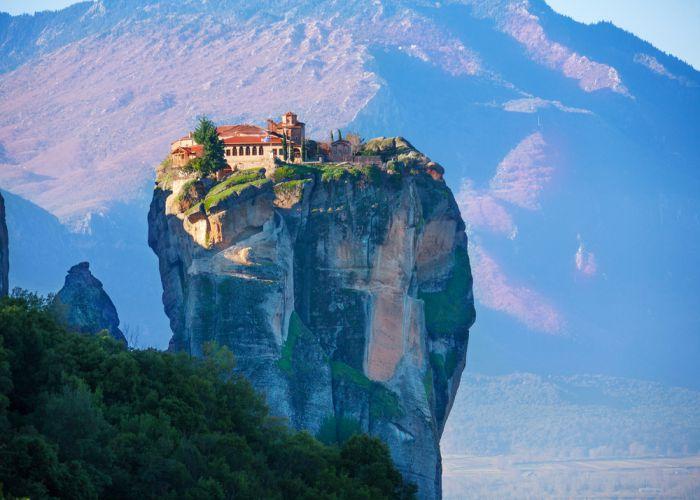 The male monastery of St. Nicholas in Meteora was founded in the 14th century in the memory of an eremitic monk named Nikolaos. Climbed on a small plateau of a sandstone pillar, the monastery is known first for its particular architecture that exploits miraculously the limited space of the plateau and second for its rare frescoes painted by the noted Cretan painter Theofanis Strelitzias in the 16th century.

In the chapel of Saint Anthony, the patron saint of monks, the visitor can lay his eyes on the fantastic frescoes of the 14th century and in the Katholikon one can see the paintings of Theofanis such as the one with Adam naming the animals. Do not miss the chance to visit this small monastery and if you are lucky enough you might have the chance to have a look at the crypt of the monastery as well.

For those that want to experience the winch transportation to a medieval monastery, head to the Holy Trinity. This small Meteora monastery is dated in the 14th century and used to have a collection of priceless artefacts. Unfortunately, during the occupation of Greece in WWII by the Nazi forces, most of the monastery’s treasures were stripped away from their context and sent out of Greece.

In addition, this is the monastery shown in the James Bond movie For Your Eyes Only. During the shooting of the movie, the monks were so upset by the presence of the camera crews and the actors that they deliberately hung their clothes on the facade of the monastery to ruin the shooting! Eventually, the movie was done and everything went back to normal. 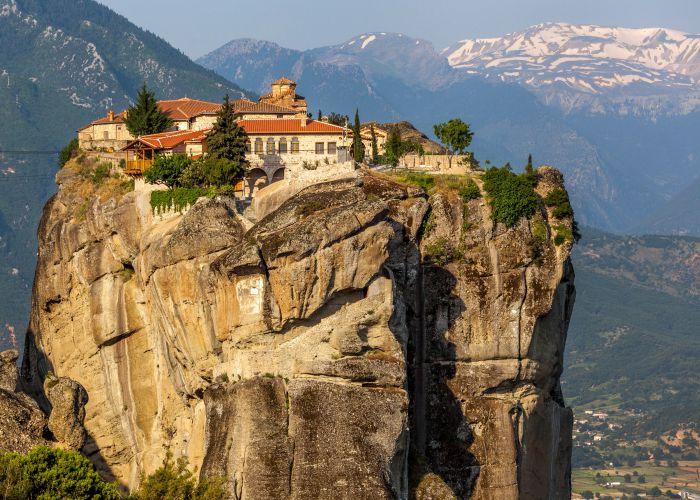 Founded originally in the 14th century CE, the monastery of Rousanou in Meteora was named after the memory of a monk that lived on top of that sandstone rock. Due to invasions and pillaging, the monks abandoned it only to be reconstructed in the 16th century. Just like the monastery of St. Nikolaos, it occupies the whole plateau of the rock and it was accessible through a wooden retractable bridge.

During its history, it was included in the nearby monastery of Varlaam and operated as a hermitage for its monks. Nowadays, it is one of the nunneries of Meteora dedicated to the Transfiguration of Jesus and St. Barbara.

Another nunnery is the one of St. Stephens which happens to be one of the most ancient monasteries in Meteora. With accounts dating the monastery in the 12th century, the traveller can see it climbed on a rock overlooking the modern city of Kalambaka. Do not miss the chance to check from up close the medieval Katholikon of the monastery and pay a visit to its picturesque museum.

The monasteries of Meteora were and still are priceless centres of culture and history. The numerous libraries of the monasteries have some of the most ancient books to be found around the world and are responsible for the preservation and survival of many ancient works of literature as well.

The abundance of accounts and copies of medieval codices and books are some of the artefacts that consist of the treasury of the monasteries. After all, all of those six monasteries of Meteora belong to the UNESCO World Heritage Sites network, a fact that reflects their cultural significance not just for Greece but for the rest of the world as well.

Therefore, the many aspects of the cultural significance of this special corner of Greece are there for you to discover.

What you need to know before visiting the Meteora monasteries in Greece:

Since Meteora is a place of worship women are required to wear a long skirt and have their shoulders covered, while men shouldn’t wear shorts. If you don’t have a long skirt to wear, the monastery will provide one for you at the entrance for free of charge.

Entry to each monastery is 3 euros, meaning that for a full tour of the six monasteries of Meteora you will spend 12 euros total. A small price to pay for such a magnificent sight as a landmark of utmost cultural and spiritual significance.

3. Hit the pause button and enjoy the view

As you’ve probably understood already, the view from the Meteora monasteries is spectacular! Take a moment to breathe in and enjoy one of the most beautiful landscapes of Greece. If you find yourself in Meteora at the golden hour, then you will enjoy one of the greatest sunsets in Greece!

Great Meteoron operates daily, except Tuesdays, 9:00-16:00 (summer hours) and 9:00- 15:00 (winter hours). During winter, the Great Meteoron is closed on Tuesdays, Wednesdays and Thursdays.

*check in with the Meteora site for possible changes in the schedule due to seasonality.

5. Where to stay near Meteora

When visiting Meteora you can either stay in Kalambaka or in Kastraki village. With a wide variety of hotels and guesthouses, you will find the perfect fit for you. Relax in a quiet or luxurious room and enjoy the view of the balcony to the Meteora rocks.

6. Explore the Meteora monasteries with an expert guide

If you want the full experience of the magnificent Meteora monasteries, with all the historic details and inner knowledge, then you should opt for a tour with our expert guide. Go on a day trip from Athens to Meteora with the train and discover the secrets of the Greek monasteries. Alternatively, for something more special, check our five-day Meteora and Delphi exploration trip!

Meteora is definitely a blessed place. One of the most popular Greek landmarks, shaped millions of years ago in combination with the second most important monastic centre of Eastern Orthodox Christianity, guarantees you an unforgettable experience that will show you the natural wonders of the area and introduce you to the spirituality of monastic life.

Don’t forget to check the Meteora itinerary we have for you and plan your own visit to Meteora or perhaps check out one of our Greece tours.

Meteora is definitely a blessed place. A unique natural landmark, shaped millions of years ago in combination with the second most important monastic centre of Eastern Orthodox Christianity, guarantees you an unforgettable experience that will show you the natural wonders of the area and introduce you to the spirituality of monastic life. Plan your own visit to Meteora or perhaps check out one of our Greece tours.

More in this category: Meteora: The Ultimate Guide »
back to top

2. The Grand Meteoron and the Varlaam Monastery

3. Saint Nikolaos Anapafsas and the Monastery of the Holy Trinity

5. What you need to know before visiting the Meteora monasteries in Greece