Along with the island of Santorini, Mykonos is the most known Greek island in the world, recognizable by anyone living almost in every corner of the earth. This iconic, famous Greek island is way ahead of the game of tourism, flooded with tourists every year for more than half a century. Join us on this trip to Mykonos, and find out why this small island is so dearly loved.

2. Escape the crowds in Mykonos

3. Where to eat in Mykonos

For those not familiar with the geography of Greece, Mykonos is located almost in the middle of the Aegean Sea. It belongs to the island complex of the Cyclades, close to the islands of Naxos and Tinos. Mykonos was the first Greek island that was touristically developed since the end of 1950’s, and nowadays stands as the flagship of Greek tourism, known for its luxury facilities, as a world-celebrity island retreat, and a party island, attracting people from every corner of the globe.

Except for highly private resorts, luxury seaside apartments, and bustling nightlife, Mykonos has so much to offer by being one of the most beautiful and historical Greek islands with a history of thousands of years. 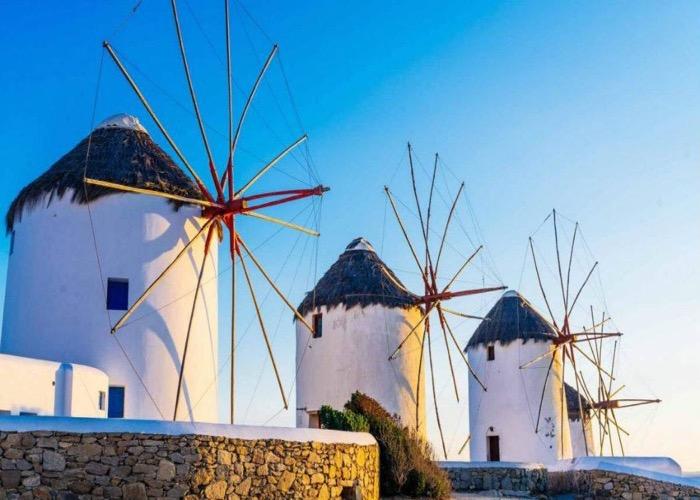 The Windmills of Chora - credits: tvxs.gr

While on the island, you can choose one of the following options to get to know Mykonos and dig a little deeper to the island’s history and cultural heritage:

Escape the crowds in Mykonos

If you’re thinking about offbeat Greek destinations to relax and escape the hustle and bustle of mass tourism, Mykonos is not the first time that comes to mind. Despite its beautiful landscape that is dominated by the trademark Cycladic aesthetic and inspires the calm and serenity the Greek islands are known for, Mykonos has been advertised as the cosmopolitan island than never sleeps, where partying gets wild and everything is possible.

No one can deny that this side of Mykonos exists. The island attracts thousands and thousands of visitors every summer, something which has shaped the type of vacations one expects and most often experiences there. However, there is also a side to Mykonos that not many people get to see and it is, in my opinion, the best one; the one that anyone who gets to encounter should consider themselves as a lucky person.

Discover below this alternative side of Mykonos, far removed from the busy streets, crowded beaches, and hectic nightlife and book your tickets as soon as you can!

Mykonos beaches to swim at 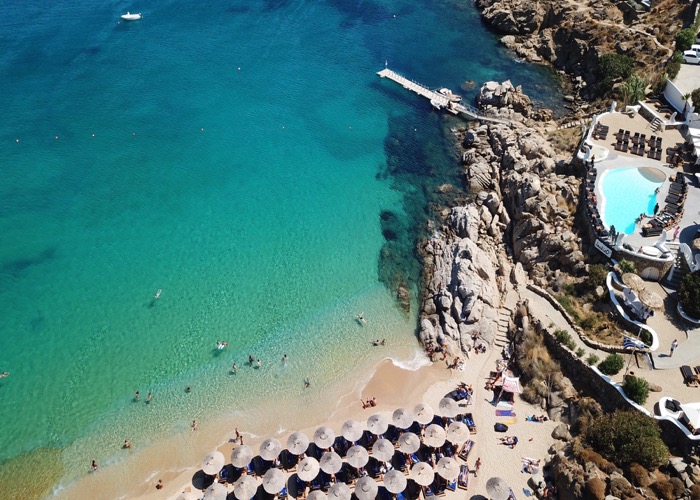 With more than 89 km of coastline, Mykonos has an abundance of beaches for you to choose from. There is literally every option available on the island from long-stretched sandy beaches to small pebbled secluded coves that offer you the wild side of the island.

Finding a quiet beach in Mykonos to swim at and enjoy the sun on your skin is easier than one might think. Yes, most beaches are organized with beach bars and gourmet restaurants serving it’s demanding guests, however, there are more than a couple of beaches that remain somewhat untouched by mass tourism and therefore maintain an offbeat feel that is valuable for those who crave relaxation.

Agios Sostis is located in the northern part of the island, on the road to the village of Ano Mera, and has a wonderful golden sandy beach. It is the most famous unorganized beach and has been named by the homonymous church nearby. Serene, lovely and quiet it is the perfect spot to fully embrace doing absolutely nothing but breathing. That being said, please keep in mind that because of its geology, it is not protected from the strong winds Mykonos is famous for, and it is therefore not the ideal choice for when the wind blows from the north.

In the southwest of the island, Kapari is one of the most beautiful, unorganized beaches and it is overlooking the islets of Delos. It has crystal clear blue waters, while its impeccable view makes it the perfect spot to catch the sunset - a true gem for the island’s couples.

Fokos, which is also located in the northern part of the island, is also an exceptional offbeat beach that doesn’t get too crowded. Its wild landscape will leave every nature-lover stunned, while shortly after Fokos, the even quieter beach of Myrsini is there to welcome the few people that know about it.

Additionally, the local-beloved beach of Choulaki, may not feature a sandy coast but big pebbles instead, however, if you visit its magical setting you won’t even notice this small little detail that keeps most tourists away.

Last but not least, Loulos Beach is an easily accessible, unorganized beach that is favored by those visiting Mykonos with kids, as i is protected from the winds and therefore offers a much safer environment for their little ones.

You can also have a look in the extended guide to Mykonos' beaches that our team has prepared!

Alternative things to do in Mykonos 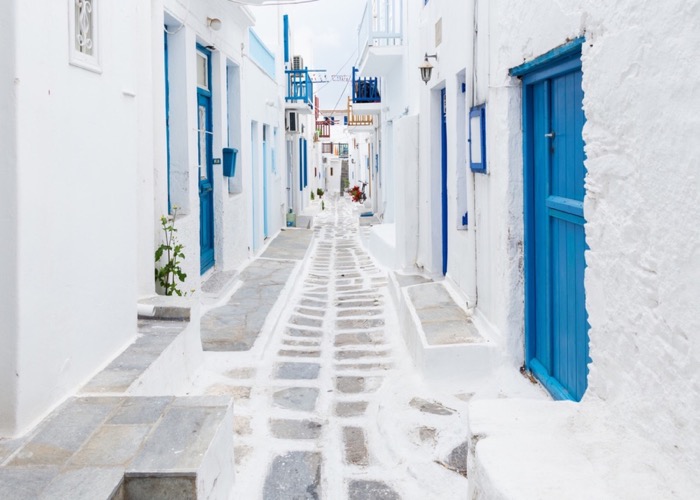 Dive into the endless blue

Discover Mykonos from the bottom of its sea. Found in most organized beaches on the island, diving introduces you to a different world that only a select few have had the privilege to be a part of. A world that showcases the true locals of Mykonos: octopus, starfish, cormorants, sponges, and Monachus-Monachus seals! You will find many diving centers that offer diving on reefs, caves, shipwrecks, or mysterious night dives; make Mykonos your oyster!

Explore the landscape from the back of a horse

If you can think of something cooler than exploring the island of Mykonos while horseriding, then I’m intrigued about your life! Jump on the back of one of Mykonos’ beautiful horses and wander around the attractions of the island, through wonderful paths, beaches, and hills. Sounds like something straight out of a fairytale, right?

If you don’t grab the opportunity to live the “big life” while on vacations in Mykonos, then I’m sad to inform you that you never will. Spike your alternative vacations with luxury and comfort by joining a sailing adventure across the neighboring islets of Delos and Rhenia.

Dive into the clear blue waters and cool off from the Cycladic air. Calm, relax, and enjoy under the sun; I’d say ‘it’s the little things in life’, but saying that from the deck of a sailboat in the middle of the Aegean would be a tad ironic.

If you’re a couch potato and you’re proud of it, then leave all the sports aside and enjoy a cult classic movie in Mykonos’ open-air cinema,’Cine Manto’. Located in the heart of Mykonos Town -or ‘Chora’- you can drink your coffee in the morning under the shadow of the thick trees that surround it, watch a movie at night, or just enjoy your a drink and some local food. You don’t need to be on your toes all day in order to have a good time!

You can always check our complete list of top things to do in Mykonos, too.

Where to eat in Mykonos 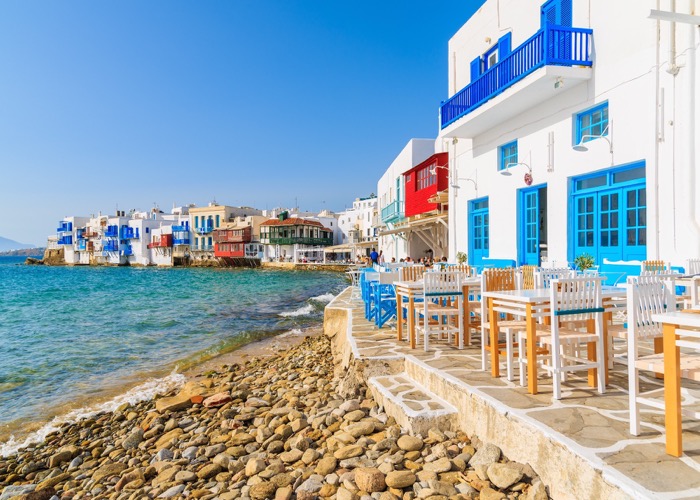 I don’t know about you, but when I visit a new destination, my biggest fear is to eat overpriced, tasteless food. Well in Mykonos, the ‘tasteless’ part is out of the question, however, the ‘overpriced’’ part is very much a thing; I don’t care what the dish consists of or if the ingredients were collected by fairies, if you charge 30€ for a plate of pasta, I don’t wanna eat it.

Thankfully, gourmet restaurants are not monopolizing the interest of Mykonos’ visitors, and therefore one can find top-quality food that is affordable and delicious.

In ‘Lounta’s Spicy Corner’ you can find dishes of exceptional quality, made with Cycladic products, and influenced by Ukrainian cuisine, the cuisine of the owner’s homeland.

‘Araxame Street’, on the other hand, is as Greek as it gets. Located in Ano Mera, it is one of the most genuine village taverns on the island that serves delicious meatballs, excellent Mykonian sausage -the world-famous ‘loutza’-, and fried squid, among others, while its desserts have made a name for themselves among both locals and visitors alike!

Another gastronomic gem that can be found in Ano Mera is ‘Seven’, offering delicious seafood dishes such as baked octopus, fried shrimp, squid, and mussels on the daily.

A little unconventional, as it is known for a different island’s cuisine, ‘Balothies’ is an outstanding meze tavern in Ornos that served delicious, traditional Cretan cuisine. ‘Bakoya Cafe’ located in Gialos, the beach in the old port of Mykonos, and is one of the oldest cafes on the island, which alongside coffee, offers a wide variety of snacks and small bites, from ‘loutza’ sausage to small fried fish.

Last but not least, the tavern of ‘Limnios’ counts more than 20 years on the island, offering an array of exquisite food, such as stuffed zucchini, different local pies, grilled meats, and seafood on the beach of Agios Stefanos.

The best tip when it comes to avoiding the large crowds in Mykonos goes without saying: avoid central locations like a vampire avoids a silver bullet, and you’ll have little to worry about. Of course, following my advice above doesn’t mean that you’ll have completely eliminated the chance of coming upon busy areas, too-high prices, and a hectic pace of life.

However, as in most travel destinations, if you educate yourself beforehand and visit the island well-prepared, you’ll optimize your stay and have the opportunity to enjoy the benefits of a well-organized island without suffering its drawbacks. If you are looking for more Mykonos restaurants and eateries, you can also check our Mykonos food guide. 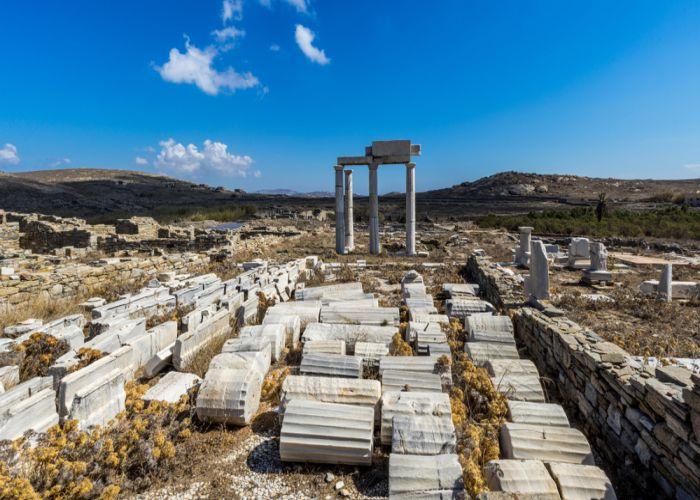 If you are planning to spend some time on Mykonos, a must-do excursion is a day-trip to the sacred island of Delos. Few kilometres away from the shores of Mykonos, Delos is a small uninhabited island but with an enormous significance for ancient Greek history.

According to the Greek mythology, this is the birthplace of the divine twins, Apollo and Artemis, the very place where Leto found refuge from the wrath of Hera, the Queen of the Gods. The visit on Delos is almost like a spiritual experience. The island, along with the neighbouring Rhenia, is almost totally uninhabited, operating as open museums. Both belonging to the UNESCO World Heritage Sites network, you will need at least three hours to explore the birthplace of Apollo properly.

With ruins dating from the 16th century BC up until Roman times filling a huge area of the island, the level of preservation regarding the antiquities and the natural beauty of the island will definitely enchant you. Do not miss to see the ancient theatre, the temple of Isis, the terrace of the Lions, and the house of Cleopatra.

Walk on actual ancient streets and discover a new surprise in literally every corner! Save some time to visit the Archaeological Museum of Delos, one of the most impressive museums of the Cyclades region.

Either you visit Mykonos as a couple or a family, you will definitely need to have a look in our guide of best areas to stay in Mykonos and also browse our carefully selected Mykonos hotels collection.  Our team has also prepared a 3-day Mykonos itinerary for your own convenience.

From party-hard options to secluded beaches perfect for a calm retreat, medieval ruins to Aegean Pompeii, Mykonos rightly remains the most popular destination for those that want to experience Greek summer.

2. Escape the crowds in Mykonos

3. Where to eat in Mykonos