Mykonos island, the queen of Cyclades, might be known for its bustling nightlife and partying ways, however, the island of winds, as it is often referred to due to its seasonal ‘meltemia’ winds that keep the island dry, cool, and enjoyable during hot summer days, has a lot more to offer to its visitors. In case you are visiting the party island with your significant other, we've got you covered. We have prepared the ultimate guide with the best things to do in Mykonos for couples and romantic things that will keep the flame burning!

1. Catch the sun at Lia beach

3. Take a sip of history at 'Tria Pigadia' (Three Wells)

7. Take on a sailing adventure

Catch the sun at Lia beach 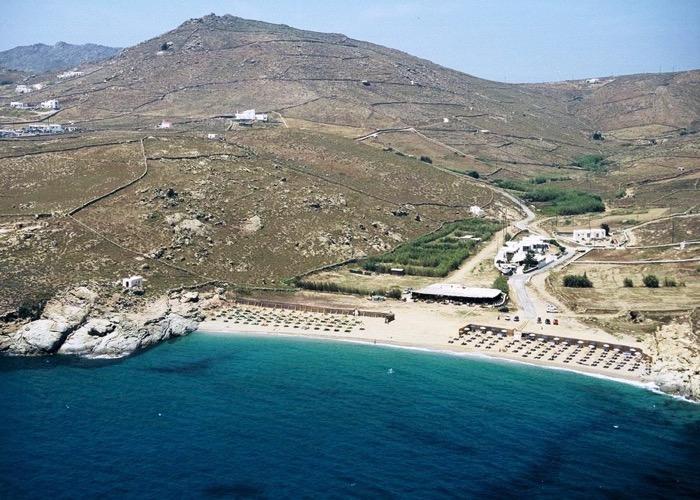 What would a visit to a Greek island be without the luxury of laying beneath the sun on one of its pristine beaches, soaking up its warmth and enjoying the salty air of the endless blue sea? To keep your romance away from the overcrowded and overpriced beaches of Mykonos, such as ‘Psarrou’ with its infamous celebrity clientele and Paradise Beach with its wild parties, you can opt for the more secluded sandy beach of ‘Lia’. Located on the south-eastern side of the island, the gorgeous beach is fenced in by rocks, offering a great opportunity for you to take on the adventure of scuba diving in Mykonos! On the other side of the rocks, you can find an even more isolated, almost private, beach where you’ll have the freedom of being alone. 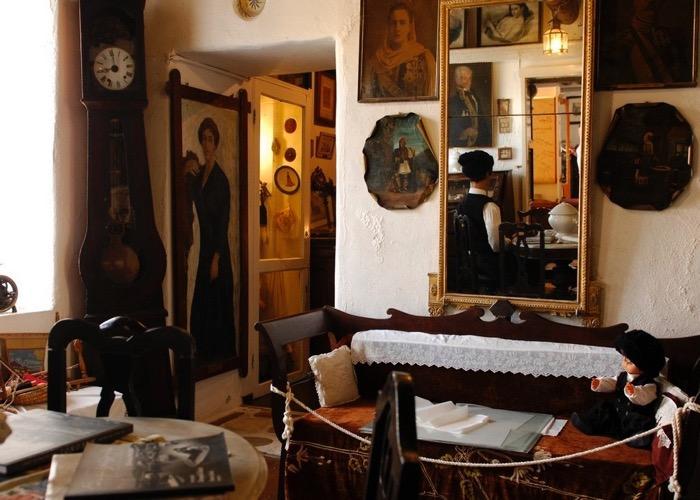 Greece is nothing if not filled with culture at every twist and turn. You can infuse your stay in Mykonos with Greek culture by visiting Lena's House Museum in the ‘Tria Pigadia’ region in Mykonos Town. A branch of Mykonos’ Folklore Museum, it consists of a typical 19th-century, furnished, bourgeoisie Mykonian house that accurately represents both the Cycladic architecture and the traditional interior design, prominent across the island.

The museum has been named after its last owner, Lena Skrivanou, and it offers a rich selection of antique furniture along with prints, embroideries, mirrors, and decorative plates that hold an old-world charm. Most of the museum’s exhibits are donations from local Mykonians, while the museum’s impressive collection of different kinds of laces was made by local embroiderers. Particularly fascinating are the recreations of traditional women's costumes from the 18th century that are displayed within the residence. It may not sound like one of the most romantic things to do alongside your partner, it is, however, fascinating!

Take a sip of history at 'Tria Pigadia' (Three Wells) 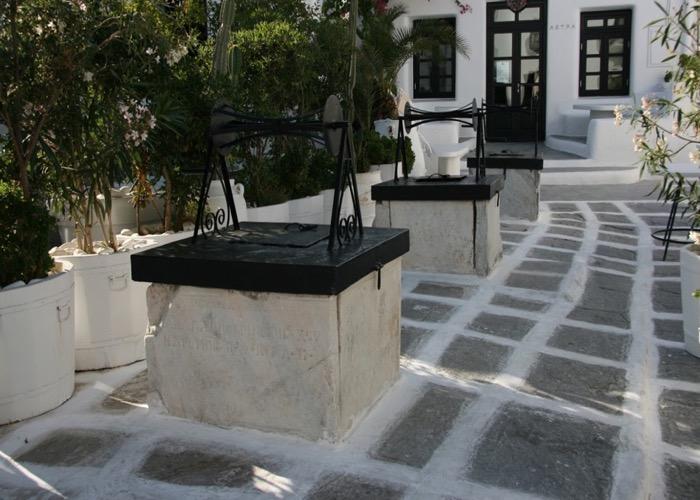 While in the area, it is worth visiting the three wells from which the whole region took its name, ‘Tria Pigadia’. There, you will see where the supply of water for the island used to come from, up until 1956. Legend has it that if you drink water from the wells, you are going to stay in Mykonos forever. Unfortunately, the wells are no longer functional, so If you were hoping to keep you and your other half away from ever returning back to the office, we are sorry to disappoint. 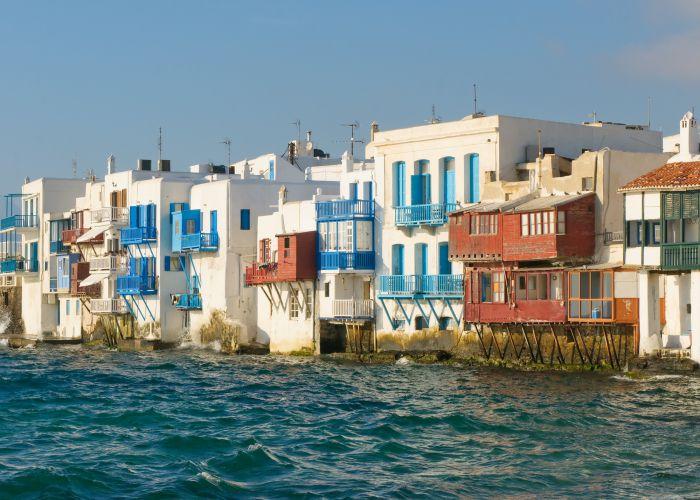 It might not be off the beaten track, in fact, it is probably one of the most photographed spots on the entire island and rightly so, however, the landmark of Little Venice is a definite must-see if you visit Mykonos, Greece.

Taking its name after its resemblance to Italy’s Venice, Little Venice is even more beautiful than in the photos, and that alone says a lot! Take a stroll around the Instagram-ready cobbled alleys of the area and sit in one of the many restaurants and cafe bars that are lined up by the shore. The wooden balconies hanging above the water offer a magnificent view out to the Aegean sea that will forever stay engraved in your memory. 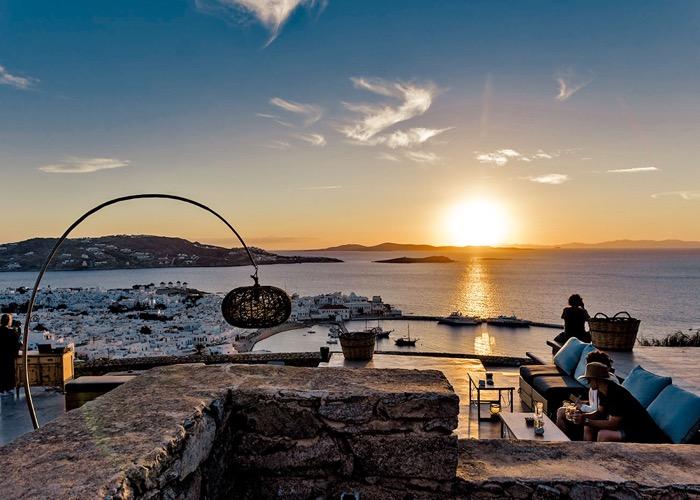 When it comes to romantic settings, nothing can beat a Cycladic sunset. Of course, Mykonos is no exception to the rule, with its sunset being one of the most whimsical experiences you will encounter. There is an overwhelming amount of choice for the perfect spot from where you can watch the sun melting into the sea, however, we suggest you try the ‘180 Degrees Sunset Bar’ for the optimum sunset-watching experience. With a breathtaking view over the whole island, delicious drinks, and reasonable prices, this bar truly stands out not only among visitors but among locals as well! 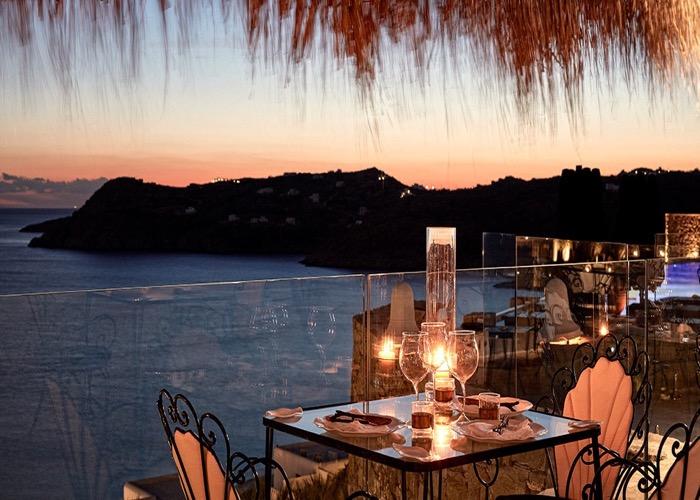 After gazing at the sunset, it is time for you to experience the riches of the Greek and Cycladic cuisine the Greek islands offer. Leaving your diet behind, indulge in a romantic dinner at the ‘Campanes restaurant Mykonian Villa Collection’ in the charming region of Elia, with the stunning Elia beach at your feet. It might not be the cheapest of options, but it is definitely the most extraordinary. The stunning setting along with the restaurant's luscious, traditional flavors, will ignite your senses and give you an insight into Greece’s gastronomy, in an inspiring combination of creativity and tradition.

Take on a sailing adventure 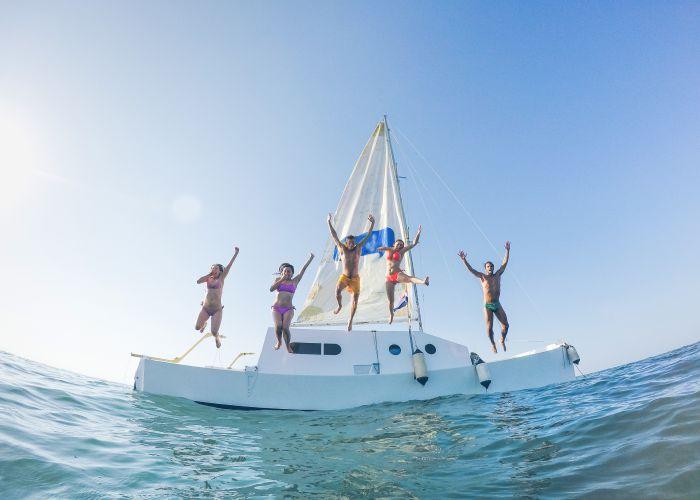 If you feel adventurous, or you simply want to experience Mykonos along with your other half in an out-of-the-box way, why not take on a Mykonos sailing trip across the deep blue waters of the Cyclades? Your captain, along with the crew, will ensure a comfortable sail across the nearby islands of Delos and Rhenia, where you will stop for an exploration of the ancient ruins of the Unesco world heritage site of the former and a swim in the crystal clear waters of the latter. You can even explore the mysterious underwater world through snorkeling.

Your sailing experience will also include local delicacies accompanied by wine and beer! With a satisfied appetite and lightened mood, you will tour Mykonos’ most beautiful beaches, such as ‘Super Paradise Beach,’ 'Ornos Beach,' and ‘Kalo Livadi’, away from the overcoming crowds and busy beach clubs and beach parties.

Don’t let Mykonos’ reputation intimidate you. Despite its rise to fame due to its wild party scene, the island is an extremely versatile destination and has something to offer to everyone; it isn’t one of the most popular destinations in Greece for no good reason.

Throw all clichés and expectations out the window and see our beautiful island through a different lens. Visit Mykonos, sip a refreshing cocktail on a beach bar, and become enchanted by its special vibe; we are here to create your dream, tailor-made Greek trip to this wondrous Cycladic island -or more- every step of the way.

More in this category: « A Guide to Mykonos’ Beaches || Mykonos Travel Guide (2023 Update) »
back to top

1. Catch the sun at Lia beach

3. Take a sip of history at 'Tria Pigadia' (Three Wells)

7. Take on a sailing adventure