One of Greece's most significant archaeological sites, and Athens, in particular, lies right in the middle of the Greek capital’s city center and stands as a true example of ancient Greek culture and excellence.

1. History of Ancient Agora of Athens

2. Buildings of the Ancient Agora

The Ancient Agora of Athens, as it is called, due to its size, feels like it most often remains unexplored by the average visitor who only walks around its premises, hears a story or two, and moves on to the next site.

Let’s fix that. Here is an in-depth exploration of the ancient site of Athens' Ancient Agora, its history, and its important buildings that will transport you back in time and introduce you to the everyday life of the locals of the ancient city of Athens.

History of Ancient Agora of Athens 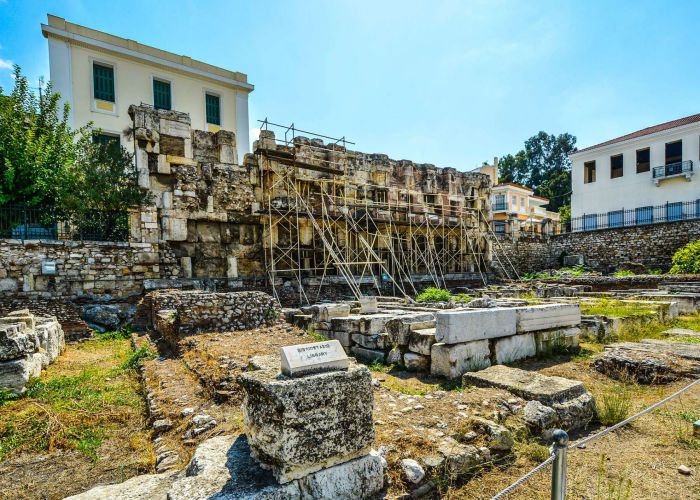 In ancient Greece, the Ancient Agora used to be the center of the public life of the locals. The word ‘agora,’ meaning ‘market,’ comes from the verb ‘agorw,’ which in Greek translates to ‘I speak publicly.’ The word's etymology is related to the multifaceted role of the ancient Agora. 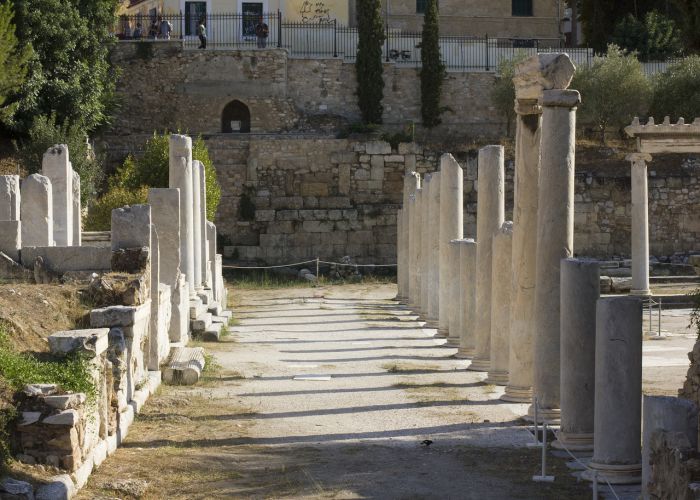 The Agora was the seat of administration, justice, and the main place for trade and business. In the pre-classical years, the Agora was an additional gathering place for the Church of the Municipality, the people of Athens, and at the same time, a stage for theatrical competitions and sports performances.

In all eras, from the archaic years until 267 AD, when it got completely destroyed by the Heroes, the Agora was also a popular destination for the social and spiritual get-togethers of the Athenians.

Buildings of the Ancient Agora in ancient Greek times

Here is a breakdown of the public buildings and important monuments that the Ancient Agora used to host during its peak:

The Administrative Center of Ancient Athens in Ancient Agora 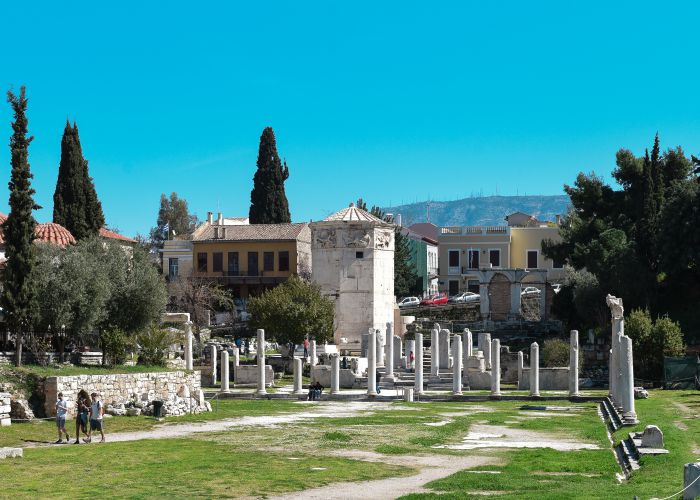 Tholos: A circular building that was the social seat of the democratic administration of the 50 Rectors, who each ruled for one-tenth of the year (36 days).

Every day in ancient Athens, a draw took place to decide the head of the Rectors, whose term would then only for 24 hours. In the building of Tholos in Athens Ancient Agora, prior to the meetings, the co-rectors used to make sacrifices to god Apollo and goddess Artemis, who were worshipped there along with the Phosphores, chthonic lower deities who protected the public life of Athens.

The Ancient Detention Center, also known as ‘Socrates’ prison’: About 100 m from the southwestern end of the Agora, among the ancient ruins of houses and laboratories, a crippled public building has been identified as the place where the Detention Center of classical times was located. Any building material at the site is scarce due to burglary.

Among the findings the first excavations brought to life, there are 13 very small vessels, perhaps used to store the venom for those sentenced to death. A worn-out statuette of Socrates was also found; this, along with the Platonic Dialogues and Plutarch testimonies, suggests that this is where Socrates was kept and where he eventually left his last breath.

Vouleftirion: In the archaic years, the deputies met in the open space of Vouleftirion, the name of which translates to ‘Parliament’ in Greek. In the Classical Era, the Parliament consisted of 500 deputies, which is why Greeks usually refer to it as ‘ the Parliament of Five Hundred.’

For the Parliament to form, each of the 10 tribes of Athens selected 50 of its representatives by drawing a lot. The term of each member of the Parliament lasted for one year.

Mitroo: A building that dates back to Hellenistic times, Mitroo used to be the registry of Athens. All the votes, written on papyrus, leather, or wooden boards, were deposited there, along with any other official documentation of the ancient times. The State of Athens hired a special officer to arrange and store these documents.

In the same building where the public documents were kept, people also used to worship the Mother of Gods Rea - Kyvelis, which is why the great goddess used to be depicted in Greek Mythology as the ‘guardian’ of the archives.

The Temple of Apollo Patroos: A small Ionian temple built during the 4th century BC and dedicated to "Patroos" Apollo, father of Ionas, ancestor of the Ionians, and therefore of the Athenians. Apollo Patroos was one of the patron deities who protected the organization of the Athenian state and was associated with the Athenian fraternities. 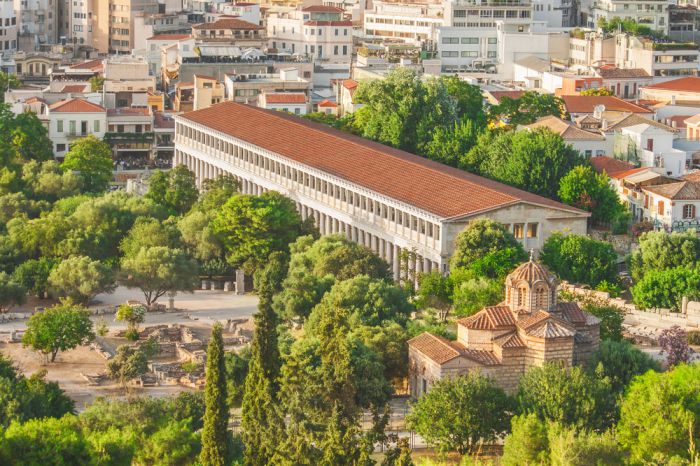 In front of the entrance of the neighboring temples of Patroos Apollo, Zeus Fratrios, and Athena Fratrias, was the altar to which the members of each Athenian fraternity commonly offered sacrifices to honor their patron deities.

The stoa of Eleftherios Zeus: A place of rest for the Athenians with wonderful paintings by painter Euphranoras. It was built in the 5th BC.

Vassilios Stoa: Also built in the 5th century BC, Vassilios Stoa can now be seen buried under the train tracks of the modern train of Athens. 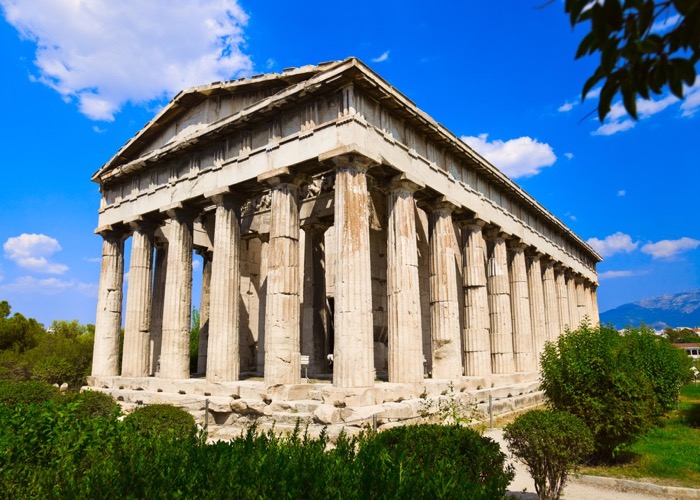 It was the seat of the king of Athens, who only had religious and judicial power. Here, there were inscriptions with all the laws of the Athenian state from the time of Solon onwards. 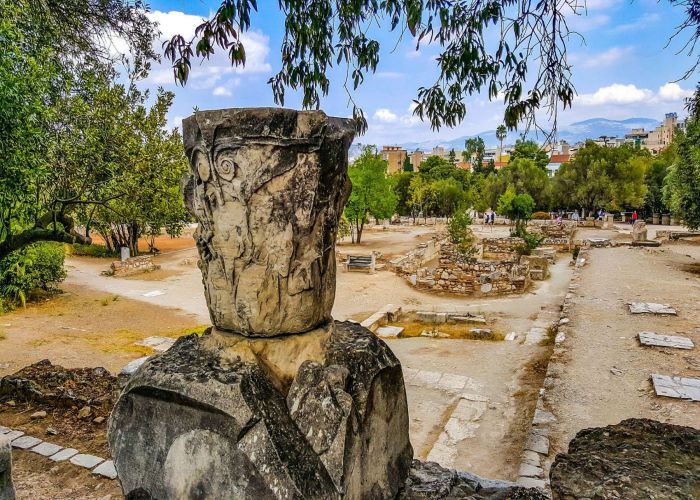 The Temple of Areos: Probably the work of the unknown architect who also built the Temple of Hephaestus in Thission during the middle of the 5th century BC.

Initially, the Temple of Areos was located in the Athenian district of Acharnes, but it was transferred to the Agora by the order of the emperor Augustus.

In front of the pile of ruins of the temple lies the Complex of tyrant-killers Armodios and Aristogeitonos, who killed the tyrant Hipparchus, an act that eventually led to the liberation of classical Athens from the tyranny of Peisistratus and therefore to the creation of the free republic. The Athenians loved the two killers, and the area was considered sacred and a place of immunity. 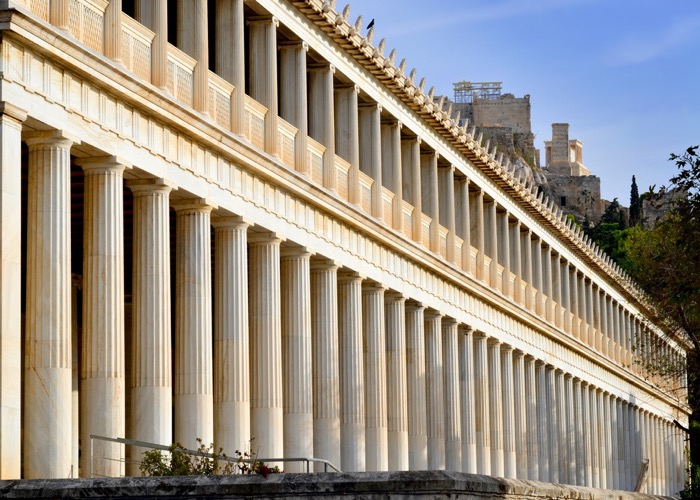 The monument of Famous Heroes: Long pedestal with a railing of the 5th century BC on which the citizens rested. The statues of the heroes of the ten tribes were erected at the monument. It was the information center of the Athenians, as that was where public announcements were hung.

The Galleries (South I - South II - Middle gallery): Built from the 5th to the 2nd century BC, the Galleries had shops, offices, and banquet halls. Near the Middle Stoa, the findings of a shoe factory were discovered, attributed to the popular shoemaker of the time, Simon, a friend of Socrates, who, according to Xenophon, was frequented by the Athenian philosopher. 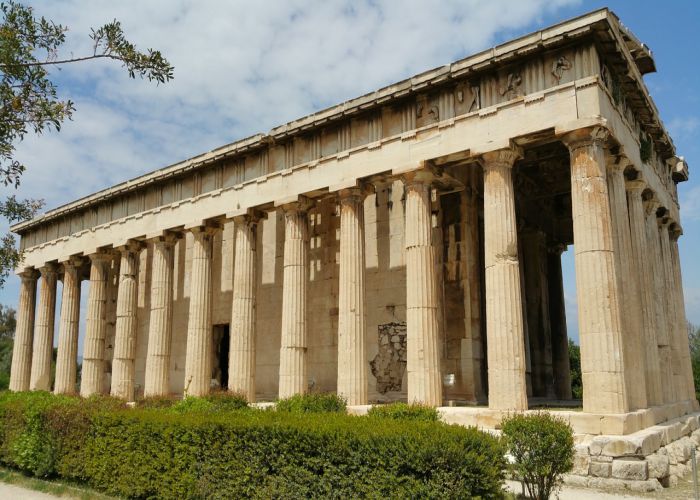 The Agrippa Conservatory: As its name suggests, the Conservatory was built by Agrippa in 15 BC, with a capacity of 1,000 spectators and a two-story gallery. The large open gallery was supported by giant statues of tritons and giants.  The sculptures used to mimic the enormous trunk of Poseidon from the western pediment of the Parthenon. 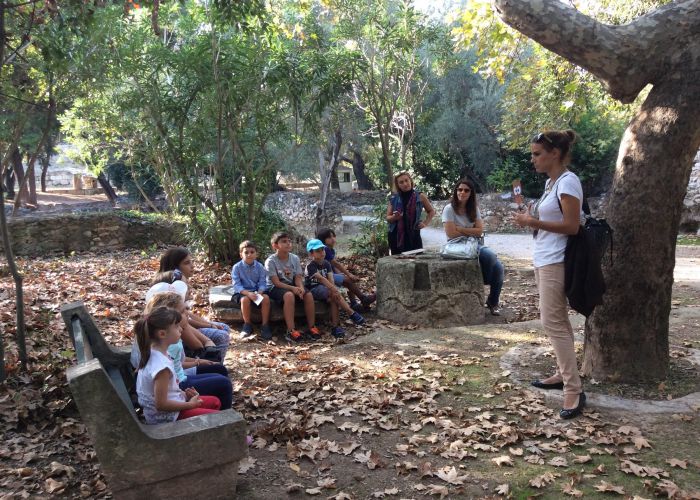 Attalos Gallery: A two-story gallery consisting of shops, which was built by king Attalus II in honor of his teacher, a Stoic philosopher, Carneadus, and the Athenians.

The gallery is 116m long. The ground floor columns have been built in Doric style, while the floor columns follow the Ionic style.

It was completely restored in the 1950s by the American School of Archeology, which since 1931 has been conducting excavations in the Ancient Agora. The Stoa now functions as a museum. The exhibits were found in the excavations of the Ancient Agora and give a representative picture of the democratic practices of ancient Athens.

Panathinaion Street: It used to start from the district of Keramikos, pass in front of the Stoa of Attalos and the Elefsinio, and end at the entrance of the Acropolis. It was the route of the procession of the Panathenaic Games, the most significant celebration of the Athenians in honor of their patron goddess. 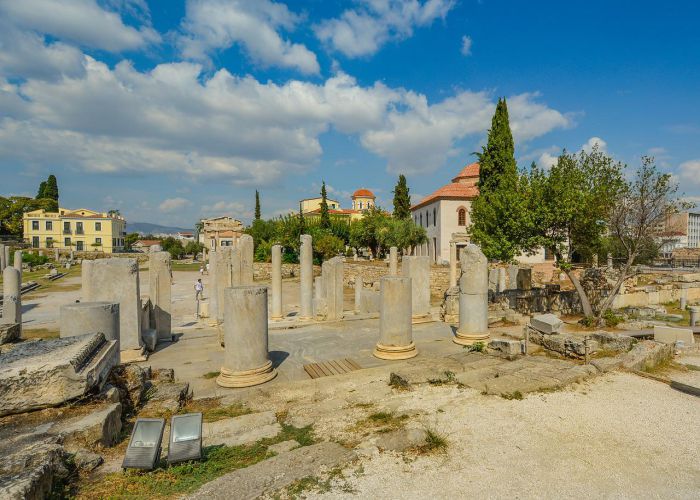 Every four years, during the summer, the Athenians, led by the leadership and the wheeled trireme (which carried the goddess's veil), went up Panathinaion Street and walked on the Acropolis. This majestic procession is depicted on the frieze of the Parthenon.

The Samuel M. Kress Foundation in New York restored it to its original form, and you can admire the Church of the Holy Apostles in Athens today.

Pantainos Library - Late Roman Wall - Elefsinio: On Panathenaic Street, towards the Acropolis, on the southeast side of the market place, we see traces of the walls that were built shortly after the destruction caused in 267 AD. Nearby was the famous Elefsinio, the Athenian branch of the great mosque of Demeter and Persephone in Elefsis.

Together with the Parthenon and Thissio, it was one of the most revered shrines in classical Athens. Every year, the day after the celebration of the Eleusinian Mysteries, the ‘Parliament of Five Hundred’ met in this place.

The Temple of Hephestus in Ancient Greece 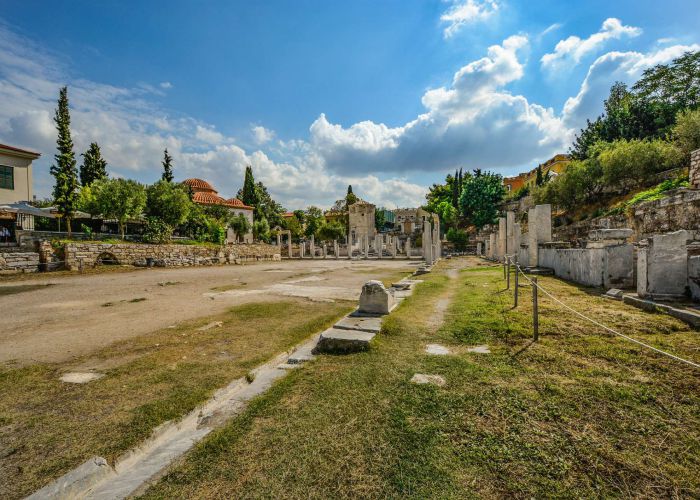 In the Ancient Agora lies the temple of Hephaestus, one of antiquity's most beautiful Doric temples. It was built in 449 BC and was dedicated to two gods, the god Hephaestus, patron of metallurgy, and the goddess Athena Ergani, patroness of the arts.

According to the characteristics of the building, the architect who undertook its construction was significantly influenced by the Parthenon. Its architect remains unknown, but he is also said to have been the creator of the magnificent temples of Poseidon in Sounio, Nemesis in Ramnuda, and Aris in Acharnes.

It was built on the hill of Agoraios Kolonos, and its surroundings were decorated with clay pots with flowers and shrubs. Inside were the two bronze statues of Hephaestus and Athena, which were destroyed.

It is a Doric pavilion temple with rich sculptural decoration made of Parian marble. The deeds of Hercules in the north and the deeds of Theseus are represented in the eastern metope. The frieze of the pronaos represents the battle of Theseus with the Pallantides and, in retrograde, the battle of the Lapiths and the Centaurs. 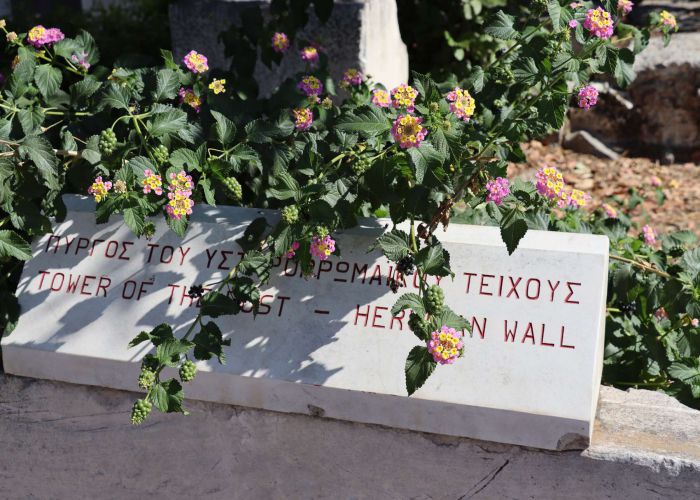 The temple has been preserved in good condition until today in the modern Greek state, largely due to the fact that in the 7th century, it was converted into a Christian church.

The temple of Hephaestus became the church of Saint George of Akamatis. The coronation of King Otto took place in Saint George when he came to Athens in 1834. Later, it became the Archaeological Museum of the newly formed state.

With the Asia Minor Catastrophe and the influx of thousands of refugees into the country, the agora area around the temple had been turned into a refugee camp. All activities stopped at the beginning of the 20th century as the first archaeological excavations began. 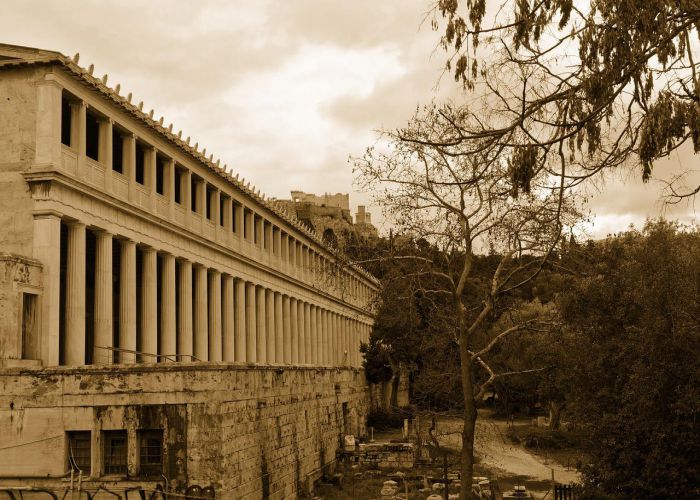 Now that you have gathered all that knowledge, you’ll never look at the Ancient Agora of Athens in the same way.

What’s more, if you visit Athens, you’ll know exactly what to look for, and you’ll be able to watch the rich heritage of the Ancient Agora come to life at the place that used to be the center of Athenian Democracy. What are you waiting for? It’s as if you’ve just become your own guide!

More in this category: « Athens Travel Guide: All You Need To Know Before Visiting Athens || Rafina Port in Athens: The Survival Guide »
back to top

1. History of Ancient Agora of Athens

2. Buildings of the Ancient Agora