Greece has been blessed with a geographical position that offers a mild climate and fertile land. The combination of the two is responsible for the variety of products that have made Greece famous across the world. Let us introduce you to the most popular Greek products you should put on your bucket list when visiting Greece. 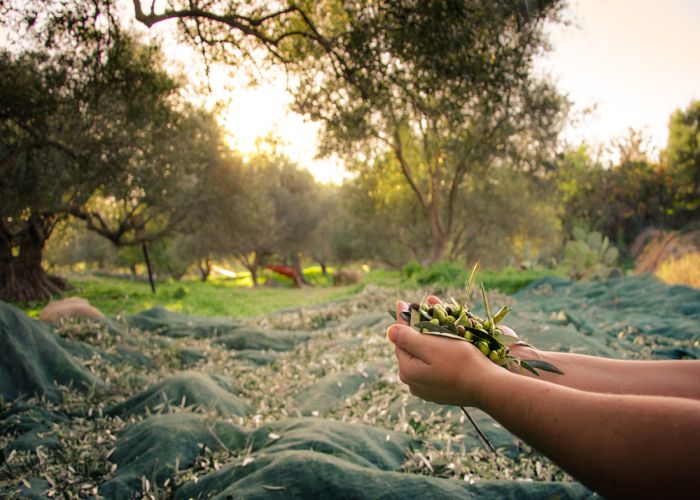 Of course, we have to begin with the king of the Greek diet, Olive oil, also known as ‘Greece’s liquid gold’. Olive oil is a key element of the Mediterranean diet and is considered to be a super food because of its content of monounsaturated fat and antioxidants. In Greece, it is our bread and butter -see what I did there?- and its consumption dates back to at least the Mycenaean era, according to olive oil storage vessels that have been found in excavations. If you didn’t know, Greeks hardly ever use butter in their cooking unless it is for baking. Instead, we use olive oil as if our lives depend on it. Olive oil has been proven to protect our cardiovascular system, help prevent strokes and reduce blood pressure, reduce the risk of depression, help maintain healthy cholesterol levels and reduces the risk of diabetes. Additionally, it protects against Alzheimer's disease, helps prevent acute pancreatitis, it acts pro-actively for some forms of cancer, osteoporosis and rheumatoid arthritis. It has anti-aging properties, has a positive effect on the development of the central nervous system and helps digestion. Not too bad, right? Experts recommend eating two to three tablespoons of olive oil a day, which -contrary to popular belief- equals with only 9 calories per gram. Greek olive oil is ideal for frying because, due to its special chemical composition, it is more resistant than any other oil. 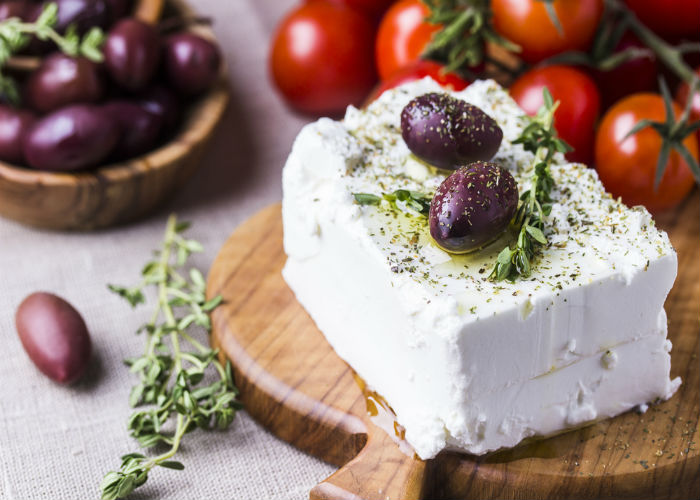 Feta cheese holds a very special place in the Greeks’ hearts, and it has been holding it since ancient Greece, thousands of years ago. It is one of the most -if not the most- exported product of Greece, globally recognizable for its origin. What most people don’t know is that in order for the white cheese to be called ‘feta’, it has to be made exclusively from sheep's milk or from a mixture of sheep's and goat’s milk, with the goat milk not exceeding 30%. Depending on the flavor, the fat contained ranges from 30% to 60%, while the average is around 45%. Feta cheese has been registered by the European Commission as a protected designation of origin (PDO) and should only come from certain prefectures of Greece and from certain sheep and goat breeds, which means that the name 'feta' can no longer be used on cheeses of a similar composition made outside of Greece. It comes as no surprise that Greece is the first country in the world in the consumption of cheese products, with the Greeks consuming more than 30 kilograms of cheese per year. If you had feta cheese in your local cuisine, you would too! 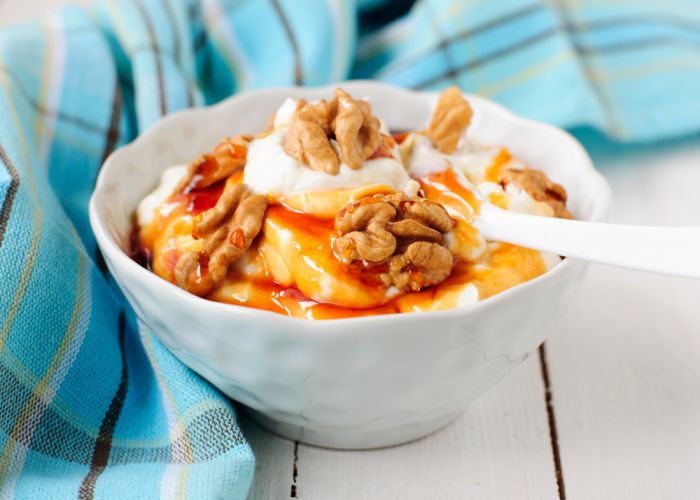 No Greek-style shenanigans here; just pure, delicious Greek yogurt, one of the oldest food products in Greece. Traditional Greek yogurt is made from pure sheep's milk and has a characteristic density, a creaminess, and a rich flavor. If you visit Greece, you can find it literally everywhere. From supermarket’s to delis, in plastic or clay, with its characteristic “skin" -a top layer of condensed milk fat- or without, full-fat, semi-skimmed or skimmed. As with most Greek products, Greek yogurt is a safeguard for health. It helps in the proper functioning of the digestive system and it helps maintain good skin health. Additionally, it contains proteins, B complex vitamins, phosphorus, magnesium, potassium, and it is rich in calcium. The ways to eat Greek yogurt are endless, but the Greeks' favorites are either as breakfast with cereal and Greek honey -don't worry, we’ll talk about that later- or as a light dinner with fresh fruits. Of course, we can’t forget that one of the most popular dishes in Greece has yogurt as its main ingredient; the world-acclaimed tzatziki. This delicious dip ensures that Greeks incorporate yogurt in their daily diet either as a sweet or as a savory snack. The world has caught up to Greek yogurt’s excellence, with its consumption around Europe and the US increasing dramatically in recent years and Greek-style yogurt dominating the markets. However, the difference between Greek-style and Greek yogurt is not just a word, but more so a world, apart; something you will figure out yourself once you try the real deal yourselves. 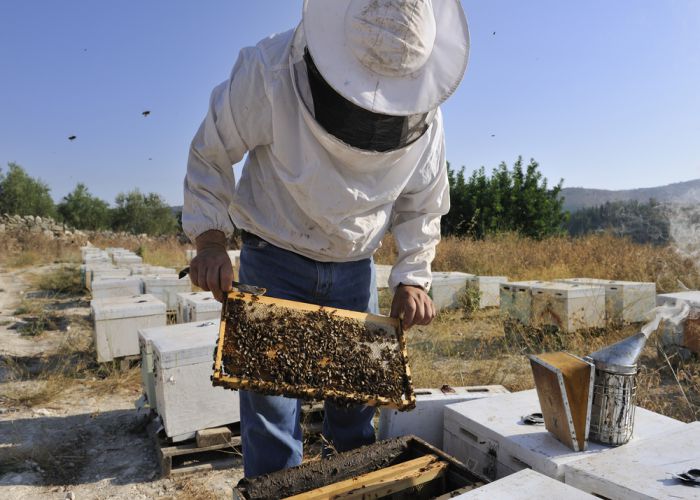 Either accompanying the aforementioned Greek yogurt or even on its own as a spoonful of energy, Greek honey is one of the most recognizable Greek products across the world due to its amazing nutritional value and its unmatched taste. The nutritional value of honey has been known since antiquity. In Greek Mythology, honey was allegedly the main ingredient of Ambrosia, the food of the Olympian gods. Additionally, Hippocrates, the father of Medicine, emphasized the nutritional and medicinal value of honey by administering it as a pharmaceutical product. Being the most important sweeter of the acclaimed Mediterranean diet, a spoonful of honey contains only 21 calories while being 30% sweeter than sugar. Greek honey production is estimated at 20,000 tonnes per year. Currently, there are eight types of honey in Greece: pine, fir, chestnut, heather, thyme, orange, cotton, and sunflower, with the name of the honey reflecting the type of plant that is more prominent in taste, despite the dozens of plants being featured in each of them. Regardless of the type, one thing’s for sure: Greek honey is the bee’s knees. Sorry, not sorry. 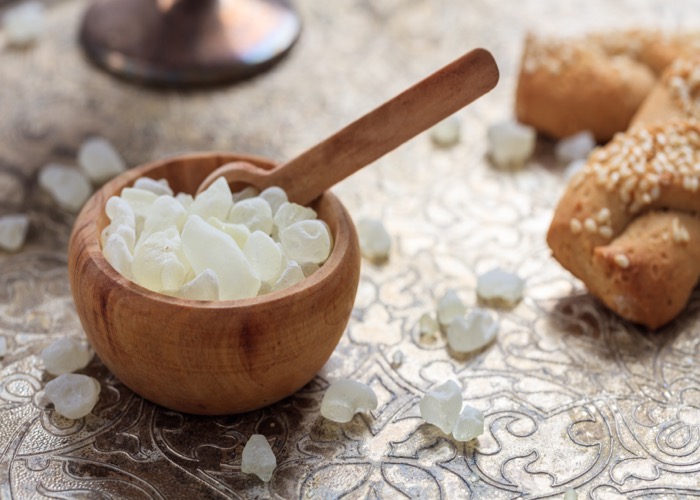 The Mastic resin has been harvested for at least 2,500 in Greece and it is an integral part of Greek culture, used both in Medicine and the country's culinary tradition. The 'tears of Chios', as it is often referred to, contains antioxidants and also has antibacterial and anti-fungal properties. The collection of the mastic resin maintains its traditional character to this day. It is extracted from the mastic tree, found on the island of Chios, by tearing its trunk at specific points. The mastic starts to flow and in about 15 days it stabilizes and is ready to be collected. This process takes place from the middle of August until mid-September. The product is then sifted, thoroughly cleaned, piece-piece, and then commercially marketed. In Greece, mastic is used in liqueurs, spoon sweets, beverages, chewing gum, sweets, desserts, types of bread, cheese, Turkish delight, and ice cream. Many attempts have been made to produce mastic from this plant in other parts of the globe but without result. Scientists have not yet found the reason why mastic does not bear fruit in any other part of the planet. However, the most likely reason is the special climate of the island of Chios. If you find yourself in Greece, don't miss the opportunity to try the unique flavor of the mastic resin. It is a love-it-or-hate-it kind of product, but one you should definitely try at least once in your lifetime. 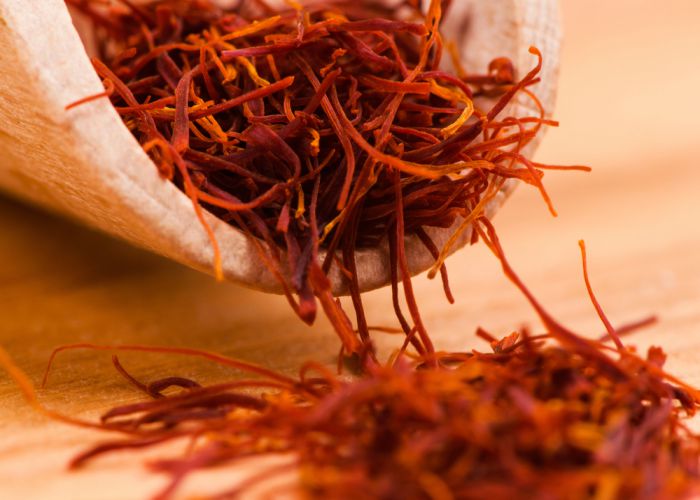 Krokos is a small town 5km away from the city of Kozani, home to the vast majority of the cultivation of Greek red saffron, often referred to as ‘Krokos Kozanis’ due to its place of production. The Greek red saffron has been cultivated for hundreds of years in Greece, being exported to many countries around the world. Its sowing takes place in June and July while harvesting takes place in late October and early November. The process of collecting Krokos Kozanis is particularly laborious and meticulous and it requires its three small stems being collected by hand from each flower separately and while it is still freshly cut. Legend has it, that even the great Cleopatra was a fan of it, using it daily for its cosmetic benefits! It takes approximately 50,000 flowers to get 100 grams of Greek red saffron, which explains its steep price. Along with its common use in Greek cuisine, Krokos Kozanis is known for its medicinal properties, containing vitamin B12, vitamin C, iron, potassium, and magnesium, among others, with scientists identifying anti-aging, antioxidant and anti-cancer properties. See? Cleopatra was a smart cookie. Krokos Kozanis can be consumed either as a hot beverage or a spice. Apart from a discrete spicy flavor, it gives food a characteristic yellow color and should be used in moderation to prevent it from becoming bitter.

Of course, we could write about hundreds of other Greek products, such as Ouzo, but the tale of Greek spirits has been told before and the list of Greek products is so big it will take us a lifetime to go through it. The culinary tradition of Greece is one of its main attributes, one you should take advantage when you visit the country. Keep an open mind and try all the products the Greek land generously offers! 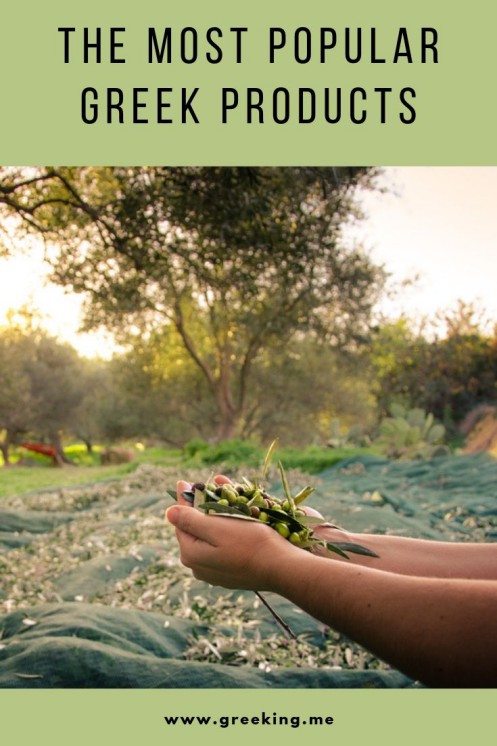 More in this category: « Cretan Cuisine: Our Favorite Cretan Recipes || The Top Traditional Dishes of Corfu »
back to top