The wine production of Greece has been -and continues to be- one of the largest, most important and most impressive wine productions across the world. Not only enjoyed by the lucky locals, the Greek wine varieties are also being exported across the international markets, reaching distant civilizations and gaining praise, recognition and multiple awards.

Here is a guide to the most popular Greek wine varieties you should make sure to try when visiting Greece!

The ancient Greeks drank wine by mixing one part of it to three parts of water because drinking wine that had not been mixed with water was considered a barbaric sin. Oh, how the times have changed! Today it is a sin if you don’t grab the opportunity to taste the traditional Greek wine varieties listed below!

Assyrtiko is one of the most popular and recognized wine varieties in Greece and can be found all across the country since its production is not limited to one specific region, but rather covers the majority of the land. Despite its many places of production, however, its place of origin is the island of Santorini.

It is a light, white wine with a fruity taste and discrete notes of lemon, that leaves a slight umami and somewhat salty aftertaste. Santorini’s wine varieties are famous around the world and many tourists that visit the island won’t miss the chance to explore them. How about you? Join us on a wine tasting tour in Santorini.

The famous Greek wine Moschofilero has Mantineia as its birthplace, a region in Tripoli in central Peloponnese. Moschofilero is a dry, aromatic white wine with distinctive flavors of peach, flower blossoms, and sweet lemon. As the wine matures, it develops an even more pungent nectarine and apricot flavor, with notes of roasted hazelnuts or almonds. If that doesn’t sound delicious, I don’t know what does! 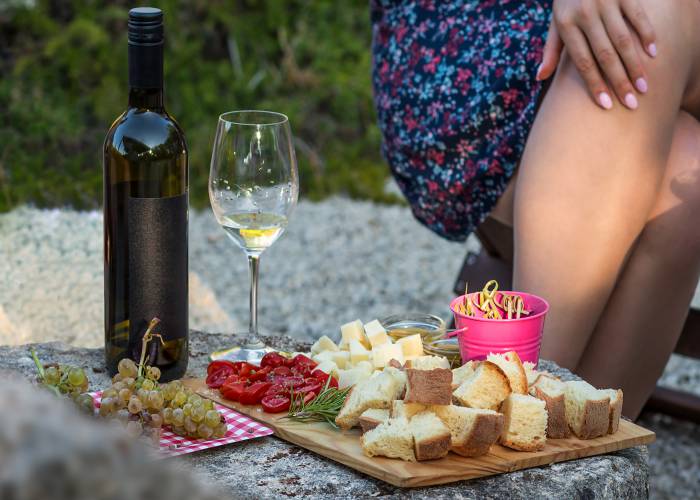 A personal favorite, Malagouzia wine is ideal for those skeptical of wine altogether; it is a delightfully light white wine that has gained popularity during recent years after its production was revived in the ‘Gerovasiliou’ vineyard in northern Greece.

It has a richer taste that resembles a cross between Viognier and Chardonnay, with flavors of orange, lime, orange blossoms and lemons, all tied together in a smooth, fruity aftertaste.

Produced in central Greece, the Greek Savatiano variety is an aromatic white wine that combines the sweet flavor of honey with the refreshing acidity of lime and green apple. Once you let it mature in oak barrels, it becomes significantly more creamy and rich, therefore, if you’re a wine lover that appreciates a mature wine, I’d highly suggest you taste aged Savatiano!

Arguably Greece's most emblematic wine and often referred to as the ‘wine for the poor’ or the ‘wine for the masses’, due to its cheap price and availability, Retsina is an acquired wine taste you must try in order to get an authentic Greek wine experience. It is a white wine that is produced in central Greece and is infused with pine juice.

Retsina has aromas of linseed and lemon peel that lead to flavors of tarts and roses, with delicate pine notes and a savory aftertaste. Retsina made with grapes of the Assyrtiko variety tends to have a more intense flavor -but ages better-, whereas Retsina made from grapes of the Savatiano variety offers a richer taste of ripe apples and herbs. 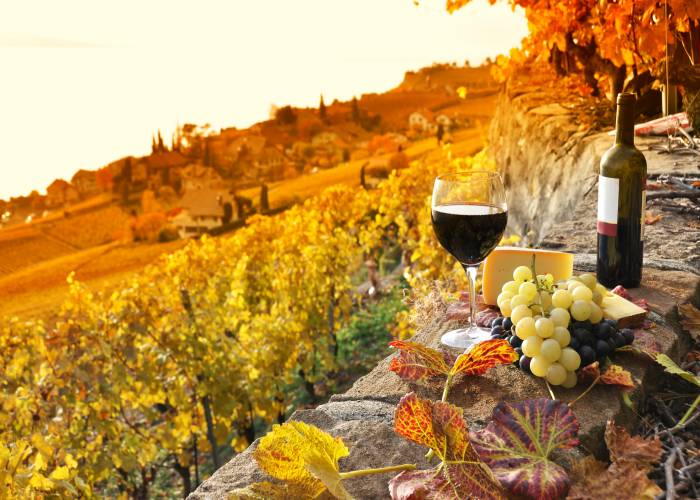 Agiorgitiko is a well-known wine from Nemea, the beautiful region in the Peloponnese, known for its impressive wine production across the world. This Greek red wine is full of flavors of sweet raspberry, black currant, plum and nutmeg in combination with fine notes of oregano. It is fruity yet rich in flavor with a heavy dose of spices.

The rosé wines produced from this variety are known for their bright pink color and fresh raspberry flavor. You can taste the Agiorgitiko variety, among others, by joining our Nemea Myth and Wine Experience with Wineries visit & hearty dinner. Sounds tempting, right?

All the way from Naxos, and specifically Naoussa and Amyntaio, comes the Greek wine Xinomavro. It offers delicious flavors of black cherry, licorice, spices, while tomato flavors are occasionally present. High in tannins and with medium acidity, Xinomavro has bold fruit flavors that make it the perfect wine for the fruity wine lovers and a great introduction to wine for newbies!

The taste and aroma of Roditis really depends on the vineyards and vinification process, but the high quality Greek Roditis wine has a pure, lemonade and mineral aroma, which depends on the region, light to medium body and refreshing acidity.

On the southernmost island of Greece, in the magnificent island of Crete, you will find the Greek wine varieties of Kotsifali and Manilaria, varieties that thrive due to the brilliantly warm climate of the island. These domestic Cretan wines are sometimes mixed with the Syrah variety to create a sweet wine with pungent flavors of red and black berries, cinnamon, spices and soy that lead to a smooth, sweet aftertaste.

If you want to know more about the Greek wine varieties in Crete, join us on a private countryside wine tour or a cretan herb farm and wine tour.

Another traditional Greek wine that comes from the magical island of Santorini, known for its vast wine production and delectable wines of unmatched taste, is the Vincento variety; a dry sweet wine that smells more like red wine, despite being produced with white amber, aidan, and atrium. Vincento has aromas of raspberry, currant, dried apricots, and maraschino cherries.

The delightful contrast between sweet fruit and bitter flavors it offers will delight your palate! When in doubt, always remember that you can’t go wrong with Santorini’s wines! 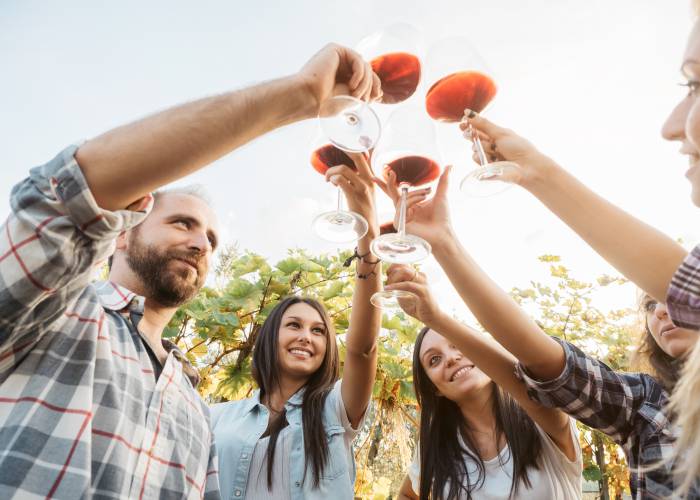 A group of friends enjoying a glass of wine - credits:  loreanto/Shutterstock.com

Another Santorinian wine on our Greek wine varieties guide is Athiri, a protected designation of origin Greek product. Athiri is an ancient white grape vine in the Aegean, which was used for centuries to produce super dry white wines, and it is considered to be the same with the ancient grape variety “Theriaki”, appearing in many ancient Greek documents.

Easy to grow and hence popular in the Cyclades, the Greek Athiri wine variety has aromas of white and yellow fruits, but its low levels of alcohol and acidity mean it doesn't age well. Best drunk in the first years after harvest, Athiri works well with the traditional dishes of Greek cuisine.

The Moschato wine variety of Samos is produced in a variety of styles, from dry to sweet, with strong aromatic notes that delight even the most demanding of consumers. It appeared in Samos at the end of the 16th century and it is identical to the Muscat de frontignan cultivated in southern France -it is believed that the French took cuttings from Samos and planted them in France creating this variety.

One of the most popular styles of Moschato is Vin Doux, which offers flavors of sweet jams, lychee, and spices.

Made predominantly in the Peloponnese and the island of Kefalonia, the Greek variety of Mavrodaphne is one of the most well-known wine varieties of Greece as it is the wine that is used in Orthodox churches for the Holy Communion.

It is a decadent, sweet, slow-harvesting, red wine with raisin and black chocolate flavors, with crisp high tannins. It is common practice for producers to mix Mavrodaphne with other grapes, including those of the Agiorgitiko variety, a blend that produces a rich, full and dry red wine with notes of raspberry, cherry, and licorice.

If you are visiting Greece during winter and you happen to come across the famous Greek Carnival in Patra, you will find plenty of street vendors selling small bottles of Greek Mavrodaphne wine. If you want to party in Patra like a Greek, mavrodafni is a must.

A study by Harvard Medical School concluded that moderate wine consumption reduces the risk of coronary heart disease by 20 to 40%. Keep yourself healthy and happy by exploring the delicious Greek wine varieties during your stay in our country. No one had a bad time with a glass of the best Greek wines in their hands! If you want to explore Greek wine culture, join us on an Athens winery and wine tasting tour, our Athens by Night tour if you want to pair your wine with some of the best dishes of Greek cuisine, or the secret wine tour in Crete. 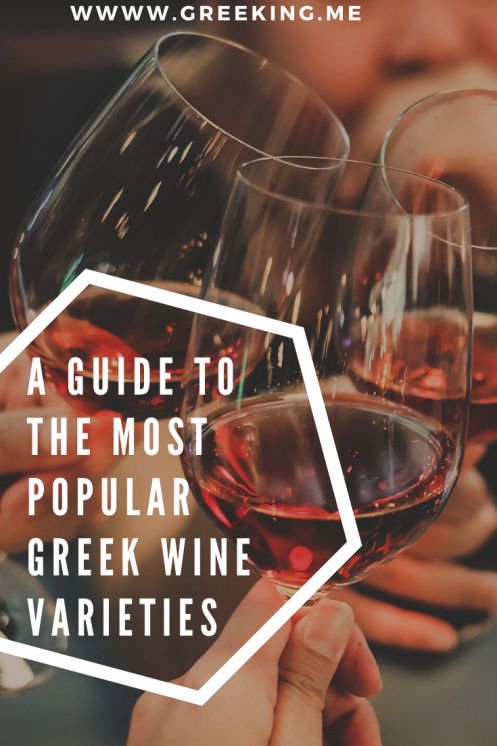 More in this category: « The Top Traditional Dishes of Corfu || The Best Restaurants in Athens »
back to top