When you think about the biggest sports event in the world, you immediately think of the Olympic Games. And you’re right! The Olympic Games have captured the interest of sports fans around the world since antiquity, keeping them excited and eager to see the accomplishments of the established athletes they’re rooting for. But how did it all begin? Let’s take a look at the vast history of the event that has defined sportsmanship as we know it today.

1. The Olympic Games during the antiquity

When were the first Olympic Games held?

The Olympic Games began in 776 BC. in ancient Olympia, with the participation of athletes from all over the ancient Greek world. They held such an important place in the life of the Greeks that the period between them, the Olympiad, was used as the basis of their chronological system.
They were the oldest and most important of all the Greek games and the most important religious celebration in honor of Olympian Zeus, the father of the gods. The fame of the sanctuary of Olympia spread throughout the Greek world, while soon the Olympic Games became the symbol of pan-Hellenic unity.

Over time, the position and importance of Olympia expanded. From a simple place of worship, it evolved into a sanctuary full of elaborate temples - the largest of which was that of Zeus - secular buildings and statues. New competitions were added to the Games and new facilities were built to serve the athletes who participated in them.

The Olympics were held every four years during the hottest days of summer. For about five days, sacrifices were made on the altars of the gods, with the most majestic being the hundred oxen on the altar of Zeus. Sports competitions were held at the Stadium and the Hippodrome, in front of thousands of spectators from all cities of the famous Greek world. The winners were awarded a wild olive wreath, the so-called ‘kotinos’, and enjoyed special honors from their homeland. 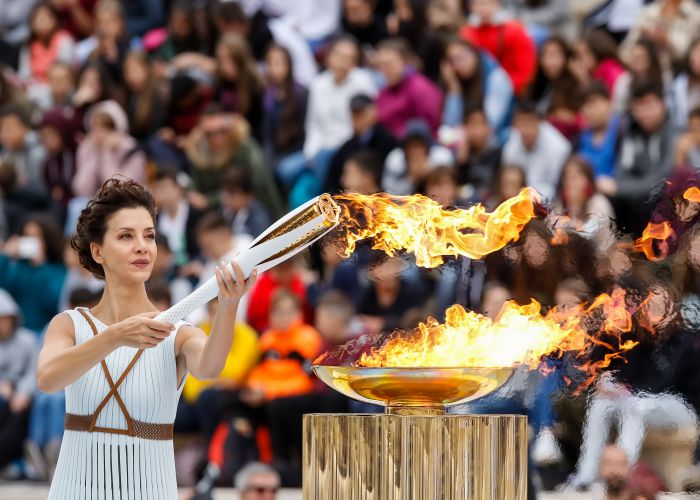 The passing of the Olympic flame - credits: Ververidis Vasilis/Shuttestock.com

All cities were obliged to stop the hostilities during their Games and only Greek citizens were allowed to participate. There were also specific rules governing both the coaching process and the conduct of the games.

The Olympic Games went through various phases of prosperity and decline until they were abolished by the Byzantine emperor Theodosius the Great in 393 AD. 1503 years later they were revived, thanks to the actions of two people, the French baron Pierre de Coubertin and the Greek scholar and businessman Demetrius Vikelas.

The archeological interest of the French first and the Germans later for the treasures of Ancient Olympia, combined with the need of worldwide culture for world rivalry and peace, revived in the 19th century the idea of ​​the revival of the Olympic Games. In 1834 and 1836, Swedish fans, inspired by ancient Greece, organized the Olympic Games in the city of Helsingborg.

In October 1850, the British surgeon William Brooks hosted the annual Olympic Games in Wenlock, County Sropshire, with road races, ancient pentathlon, horseback riding, cricket, and more. There was a close bond between Brooks and Greece, as the then King George I sent Brooks a silver prize and he in turn offered a special prize to a Greek athlete who distinguished himself on the road, during the First Zappia Olympics of 1859.

In 1838, the first attempt was made to hold the Olympic Games by the neighboring Municipality of Letrina (today's Ilia Tower) by a group of enlightened archaeologists.

In 1859, the national benefactor of Epirus, Evangelos Zappas, undertook the revival of the Olympic Games at his own expense. On October 18, in the presence of the royal family, the First Olympics began. The international press welcomed the initiative, but the Greek newspapers commented negatively, due to the inexperience of the organizers, but also their decision not to hold the Games at the Panathenaic Stadium.

According to the Greek press, Loudovikou Square -today's National Resistance Square, better known as Kotzia Square- did not have the infrastructure to meet the needs of such an important event. Despite the failure of the Games, however, the effort put in order for them to take place was not in vain. Three more Zappeian Olympics or ‘Olympia’ were held in 1870, 1875, and 1889, which significantly strengthened the demand for the revival of the Olympic Games.

The idea of ​​reviving the Olympic Games was becoming increasingly popular in Europe. On November 25, 1892, the then 29-year-old Baron Pierre de Coubertin, speaking at the Sorbonne during a conference of the Association of Sports Clubs of France, proposed the re-establishment of the institution, at an international level, but was met with general indifference.

Coubertin was not disappointed. Two years later, in June 1894, he resubmitted his proposal to the International Sports Congress, which he organized at the Sorbonne. Greece was represented by the scholar Dimitris Vikelas, who accepted the relevant proposal of the founder of the Panhellenic Gymnastics Association, Ioannis Fokianos. Vikelas, in collaboration with Coubertin, presented at the conference a memorandum, with the unique theme of the revival of the Games.

On June 23, 1894, the delegates unanimously voted for the reconstitution of the ancient institution, expressing the wish for the celebration in Athens of the first International Olympic Games in 1896.

The First Modern Olympic Games were held with great success, as it was internationally recognized, in the small and poor Greece of that time, focusing on the fine Panathenaic Stadium. which was completely renovated, thanks to the financial contribution of the national benefactor George Averoff. Athens then had 111,486 inhabitants, becoming the smallest city that has organized the Olympic Games.

The assignment of the games in our country on June 23, 1894, was greeted with enthusiasm by the fans of the time, but was treated with caution by the political class of the country, due to the dire economic situation. However, King George did not share the hesitations of the politicians and expressing the lively interest of the public, he formed the organizing committee under the successor Constantine, which managed to raise the necessary funds with funds and contributions of rich Greeks. 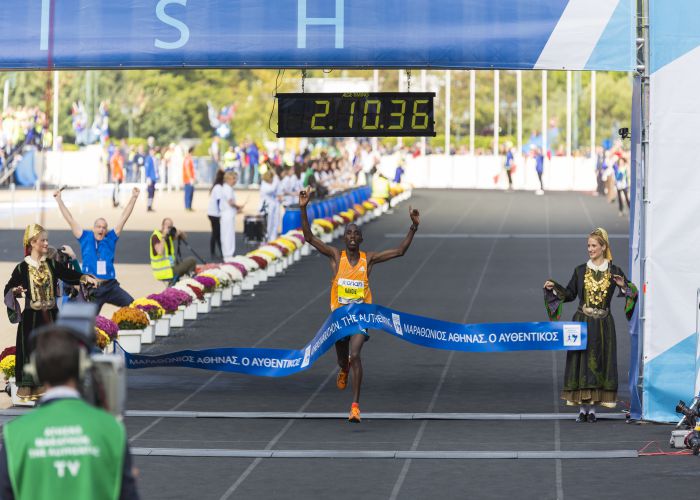 Thus, early in the afternoon of March 25, 1896, the renovated and crowded Panathenaic Stadium was given the start of the first Olympic Games of the modern era. Immediately after, the ’Olympic Anthem’ was heard for the first time, in poetry by famous Greek poet Kostis Palamas and music by Spyros Samaras.

241 athletes from 14 countries -Greece, the USA, Germany, France, Great Britain, Hungary, Austria, Denmark, Switzerland, Australia, Sweden, Bulgaria, Chile- participated in the first modern Olympic Games. Women were not allowed to participate. As a sign of protest, a young Athenian, Stamata or Melpomeni Revythi, ran the marathon alone on the day after the triumph of Spyros Louis, in 5 hours and 30 minutes.

The vast majority of athletes were from Greece, which won for the first and last time the first place in the medal table. The rest of the winners received a silver medal, an olive branch, and a commemorative diploma, while the runners-up received a bronze medal, a laurel branch, and a diploma. It was later that the International Olympic Committee decided to award gold, silver, and bronze medals to the top three athletes in each event.

Spyros Louis, who won the Marathon, and the Australian accountant Edwin Flak, ‘The Lion of Athens’ as his compatriots called him, who won gold in the 800 and 1,500 m, emerged as figures in the races, something few athletes have achieved until today. A day later, Flak tried to win the Marathon, but three kilometers before the finish line and while ahead, he collapsed and left.

In fact, at the last moment, he avoided the lynching by the spectators, when he punched a Greek fan, misunderstanding the latter's attempt to help him.

The curtain of the first Olympic Games of Athens fell on April 3 at the Panathenaic Stadium, with the coronation of the winners and the awarding of medals and diplomas by King George I.

With a long-standing history that counts thousands of years the institution of the Olympic Games is today stronger than ever without showing signs of going away anytime soon. Another gift of the Greeks to worldwide culture, the Olympic Games are the biggest and most significant sports event in the world promoting the values of discipline, teamwork, and solidarity while showcasing the magnitude of effort and willpower.

More in this category: « The Temple of Olympian Zeus in Athens || The Panathenaic Stadium In Athens: History & Visit Guide »
back to top

1. The Olympic Games during the antiquity