'...Big black sea, with so many pebbles all around on the neck, so many colored precious stones in your hair.'

1. Walk around the ancient city of Minoa

2. Discover the villages of Langada and Tholaria

3. Saint Anna and the Monastery of Hozoviotissa

4. The Chora of Amorgos

5. How to get to Amorgos

6. How to get around Amorgos

7. Where to stay in Amorgos

This is how Greek poet Nikos Gatsos described Amorgos, this brutally beautiful island of the Aegean Sea, located at the easternmost border of the Cyclades complex.

Amorgos is definitely not a typical Cycladic summer destination but rather an alternative travel experience and one of the most beautiful Greek islands that deserves to be explored.

Having a strangely long and narrow shape resembling a seahorse, its high mountains, uninhabited islets, and the massive cliffs of Amorgos contribute to the feeling of wilderness and remoteness it provokes. 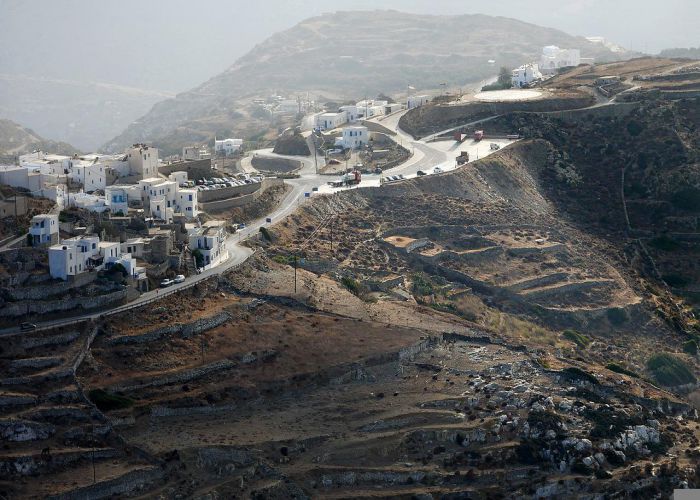 Like most less touristy destinations, Amorgos is about eight hours away from the port of Piraeus by the conventional ferry ride, making traveling there an experience of its own. Once you set foot on the island, prepare to have the most authentic taste of a Cycladic island; it will be worth the hours you spent getting there.

Amorgos took its name from a type of flax that can be found on the island. The locals used to process the flax and make clothing out of it. During ancient times, the island was also known by the names Yperia, Patagy, or Platagy, Pagali, Psichia, and Karkisia.

The archaeological investigation of the island proved that Amorgos has been inhabited since the 4th millennium BC and served as an important center of the remarkable Cycladic civilization. Numerous marble figurines found on the grounds of its prehistoric settlements and cemeteries add to that statement.

The Minoans did not miss the chance to exploit the island's position for their commercial interests and founded their city, where the port of Katapola is today. The Naxians, the Milesians, and many others succeeded the Minoans, founding cities on every side of the entire island.

During classical times, Amorgos had three main city-states, self-governed but with a common currency. In Roman times, the remoteness and wild nature of Amorgos made it a place of prison and exile. After the Greek War of Independence, Amorgos was included in the New Greek State.

Walk around the ancient city of Minoa 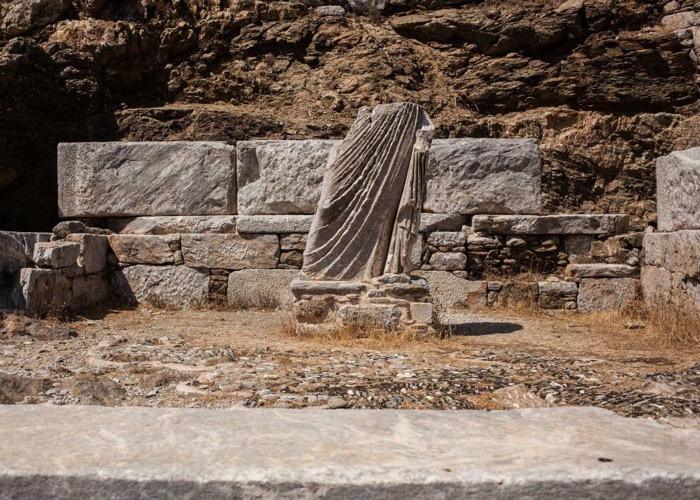 The ancient city of Minoa is located just above the modern port of Katapola in the middle of the island's western coast.

Numerous archaeological expeditions unearthed many of its ancient buildings and artifacts, illuminating the past of Amorgos. Hence, the habitation of Minoa is considered to stretch back to the 4th millennium BC with an abundance of Cycladic figurine fragments discovered on the site.

During historic times, the settlement expanded greatly, and a huge wall was built around it for security purposes. During Hellenistic times, a renovation program conducted by the citizens of Minoa offered the visible ruins of the all-marble temple today.

Most of the artifacts of the ancient city are on display at the Archaeological Museums of Amorgos.

Discover the villages of Langada and Tholaria 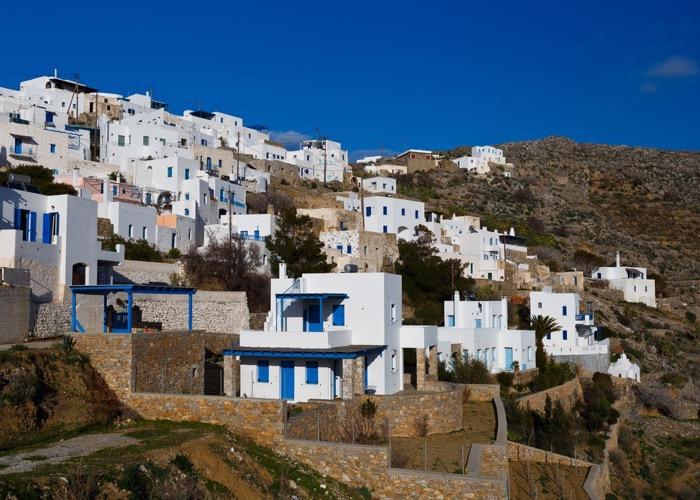 Langada and Tholaria are two small, picturesque villages in the island's northern part, less than 5 km from each other. Both villages share Aegiali bay, a long, sandy beach (or Aegiali beach) that serves as the smaller port of the island.

The traditional Cycladic architecture, warm-hearted people, and authentic vibe will captivate you and steal your heart immediately. Go from one village to another by following the traditional hiking trails that the people of Amorgos have been using for centuries. This experience will be the furthest from mass tourism you will get when you visit Amorgos or any of the best Greek islands.

Tholaria is situated at the top of rocky hills, where the Milesians first founded their city. Tholaria is the perfect example of an authentic Cycladic lifestyle, with small houses with colorful backyards and the central square that is pivotal in the village's social life.

There, you will find the famous taverna of Kali Kardia -that translates to 'Good Heart'- which has hosted the visitors of Tholaria for many years, offering them traditional dishes of Amorgos, cooked in the most authentic way possible and indigenous products, such as local cheese and other delicacies. 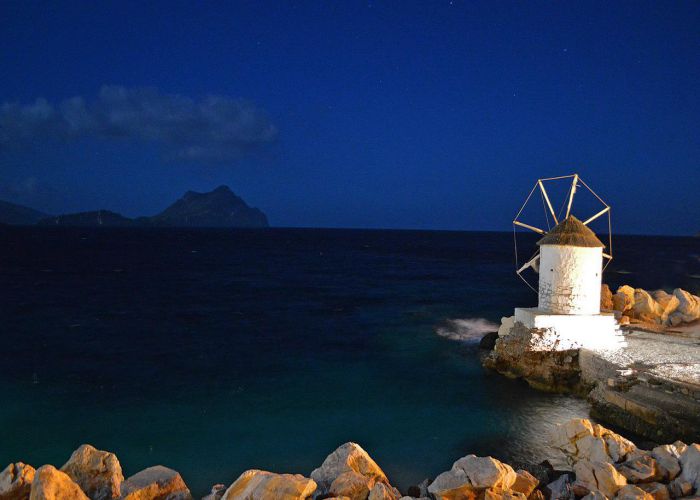 Stay at the square a bit longer and see how it comes to life during the night. Become a part of the locals' festivities, dance to the tunes of the traditional instruments, and perhaps, if you're lucky, enjoy a performance of Karagiozis.

Both Langada and Tholaria, aside from their authenticity and beauty, are known for two traditional games, which have originated from ancient times and have been played continuously for thousands of years.

At Tholaria, you will witness the game of Bilyi, which resembles bowling. The pins are made out of local wood, and the rules of the game have remained unchanged for centuries.

At Langada, the most popular activity among locals is Bales, the forefather of French pétanque or Italian bocce; two teams have their 'ballers' competing against each other in an effort to collect as many points as possible. In the village's main square, people still practice this ball sport on the small dirt field designed just for that.

Agia Anna Church and the Monastery of Hozoviotissa 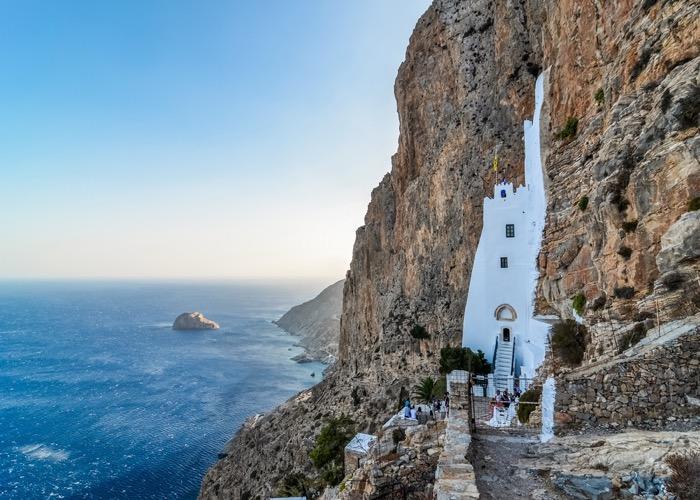 Right next to the Chora of Amorgos, attached to the rough cliffs of the island's eastern side, lies the famous monastery of Virgin Mary the Hozoviotissa, which became popular worldwide after Luc Besson's film Le Grand Bleu.

According to tradition, during the harsh years of Iconoclasm that swept the lands of the Byzantine Empire, miraculously, the Holy Icon of the Virgin Mary found its way from Palestine to the small island of Amorgos. The inhabitants found a monastery to rescue and honor the miracle that allegedly happened before their eyes.

The monastery is the second oldest monastery to be found in Greece. Although it was originally built in the 9th century, the Roman (Byzantine) Emperor Alexios Komnenos renovated its premises and granted many privileges to the monks of the monastery. 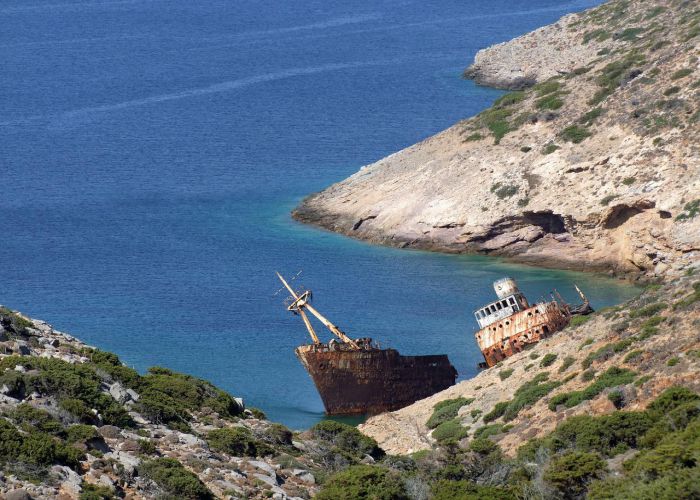 Its bizarre, unique, and impressive architecture, holding on the edges of the cliff, offers an unmatched experience to the visitor. Inside the monastery, priceless relics of the Byzantine empire, religious artifacts of hundreds of years of age, and the humbling atmosphere of the monastery make for a must-see attraction.

Follow the modern trail starting from the Chapel of Agia Anna, the original discovery site of the Holy Icon, and gaze at the big blue Aegean Sea stretching for miles in front of you. Do not miss the chance to finish your day at the small beach of Hagia Anna, just below the monastery. 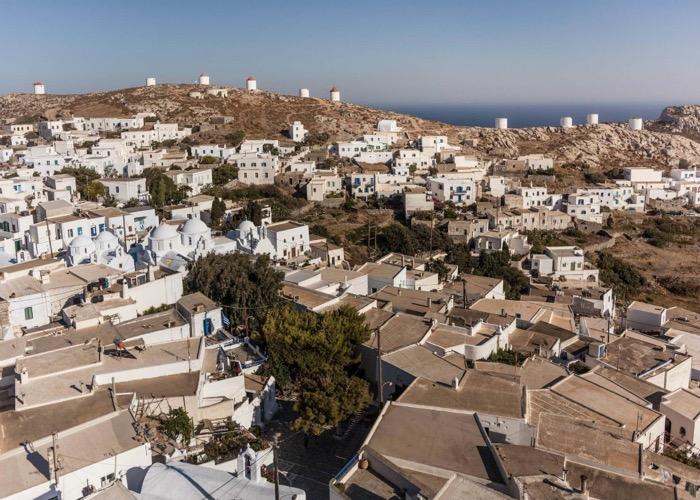 The Chora of Amorgos island is the main town of the island and its medieval capital. Following the medieval trend of relocating to the mainland to protect themselves from the raging piracy, Amorgians founded their town at the top of a mountain overlooking the sea passages on both sides.

Perhaps the most authentic and traditional old town found in the Cyclades, you will immediately feel enchanted by its beauty. Walk around the small, picturesque alleys of the town, and mingle with the locals to experience how life in the Aegean Sea used to be way back when. 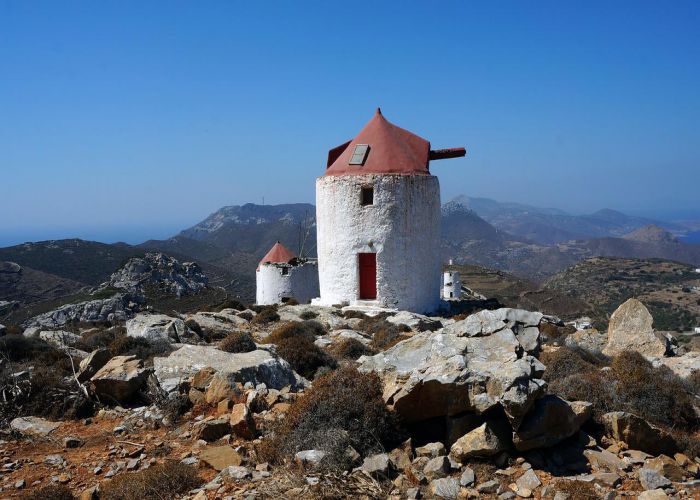 Don't miss the chance to visit the Venetian castle of the 13th century and the ancient church of Hagia Leousa; ask the locals to give you the key to the castle. Otherwise, you'll stay locked outside!

Relax at the two squares of Amorgos Chora, the Low and Upper Loza, visit the emblematic windmills and explore the ancient tower dating back to Hellenistic times.

How to get to Amorgos? 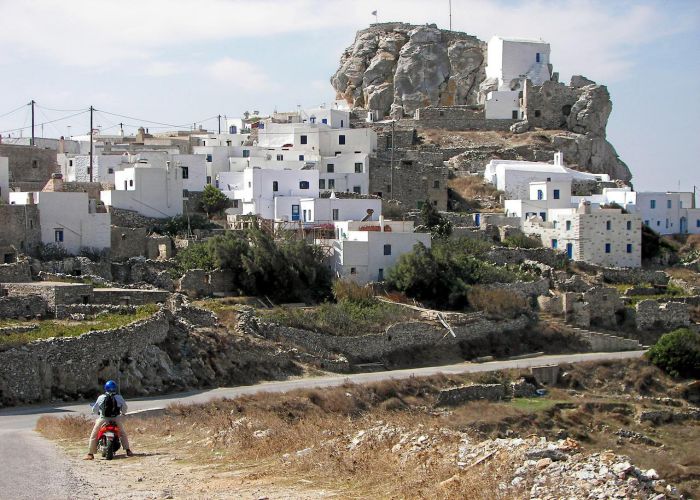 Despite being one of the best Greek islands in our opinion, Amorgos does not have an airport, so if you want to reach Amorgos island by airplane, you will have to go with intermediate stops to the islands of Naxos, Santorini, or Mykonos, which are connected daily to the Athens International Airport El. Venizelos.

How to Get Around Amorgos? 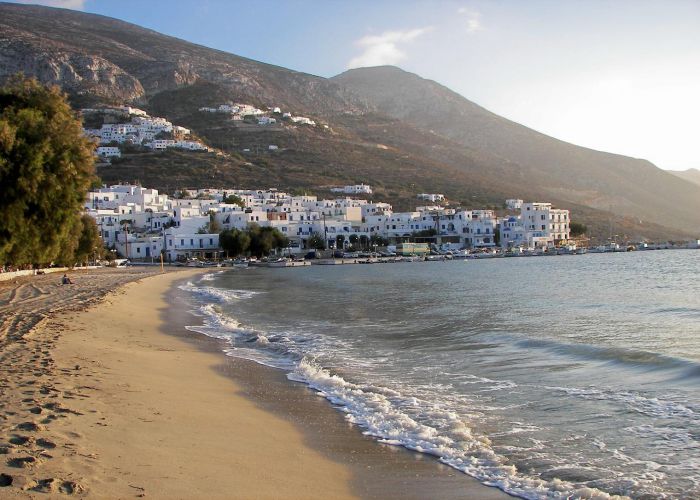 Amorgos has air-conditioned buses that cover the entire road network of the island. During the summer months, the KTEL connects the complex of villages of Aegiali with Agios Pavlos and Agios Pavlos beach, Chora tis Amorgos, Katapola, and the villages of Kato Meria. The ticket price depends on your route and is valid for a single use.

Alternatively, move comfortably and safely to your destination on the island by calling a taxi. You will find telephone numbers of TAXI drivers of Amorgos at the bus stops and at scattered signaling points in the villages of Amorgos.

Finally, there are many car or scooter rental points with daily charges you can opt for if you want to have the independence of driving your own vehicle around.

Where to Stay on Amorgos? 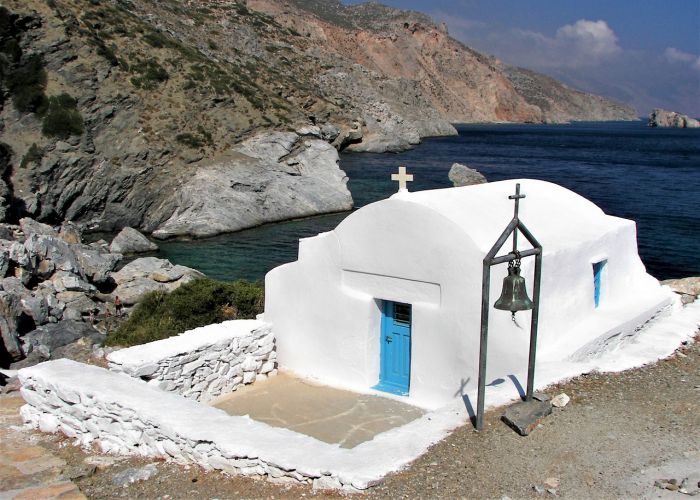 There are two major harbor towns we suggest you stay on Amorgos island, Katappola and Aegiali belonging to this municipality.

Aegiali has much better things to be done. Katapol is more slumbery and has fewer things to do, but it's cheaper than either. Decide where you want to stay based on when you leave for the ferry. My ferry came and left for Katapola. 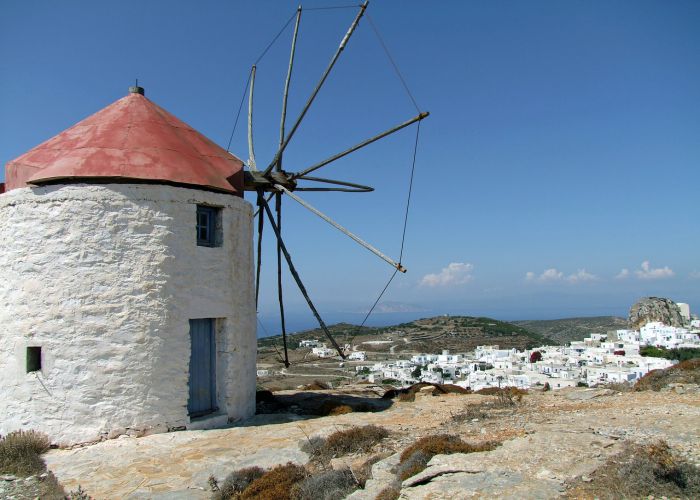 Amorgos is a jewel of the Cyclades islands and one of the most beautiful Greek islands, offering a rare glimpse of the authentic Cycladic life. Ideal for the alternative traveler, Amorgos island offers everything one could possibly want, from a well-organized trail network, sites of historical and archaeological interest, and beautiful beaches, to picturesque traditional villages and awe-inspiring energy that floods your body.

Additionally, once you visit Amorgos, you have the chance to mingle with locals, taste the local cuisine, scuba-dive in its pristine waters and gaze at the night sky with telescopes.

To whet your appetite for Amorgos, consider watching the 1988 cult film, 'The Big Blue,' Luc Besson shot as a director. You won't need much convincing after that.

Do not let its remoteness deter you from going to Amorgos, plan your own visit to the island and check out one of our Greece tours & Greek island tours.

More in this category: « The Most Authentic and Unknown Greek Islands [2023] || Milos Island: a Travel Guide »
back to top

1. Walk around the ancient city of Minoa

2. Discover the villages of Langada and Tholaria

3. Saint Anna and the Monastery of Hozoviotissa

4. The Chora of Amorgos

5. How to get to Amorgos

6. How to get around Amorgos

7. Where to stay in Amorgos