For those looking to explore a side of Greece, most visitors don't get to see and take a trip to an unknown Greek island summer destination, we recommend the following five options for you to experience the authentic side of Greece.

Greece is a country that has more than 5000 Greek islands and islets floating in the seas surrounding its mainland. With more than 200 of them inhabited, there is a wide range of options capable to satisfy even the most demanding traveler.

In this article, we aim to introduce you to some of the authentic and unknown Greek islands that promise you a lifetime travel experience. 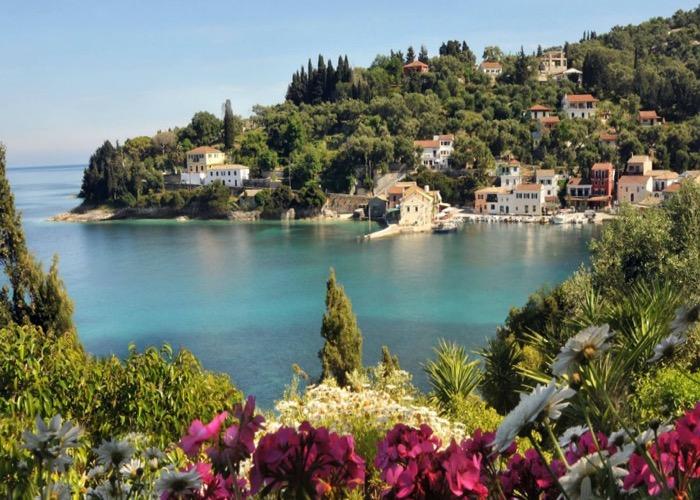 Located in the western part of Greece, in the Ionian Sea, Paxoi consists of two main Greek islands (Paxos and Antipaxos) along with some other uninhabited islets. The main port lies on the largest island of Paxos and is reachable either from the port of Igoumenitsa or Corfu.

For those traveling from Athens, there are buses that make the trip to Paxoi in case you don't have a car of your own. Unlike the popular, bustling island of Corfu, Paxoi is characterized by its tranquil atmosphere, the seclusion of a small island, and many amazing beaches for you to choose from. 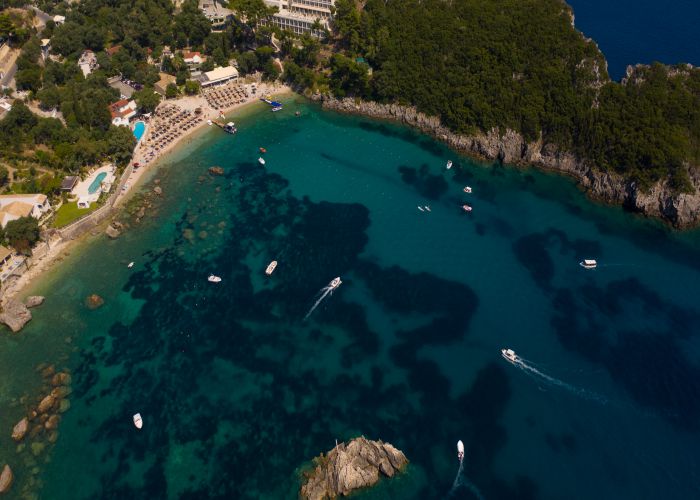 In ancient times, people believed that the Greek islands of Paxoi were originally connected to Corfu until god Poseidon struck the end of the mythical island with his trident to create an island retreat for his beloved wife, Amphitrite.

Despite its small size, many significant events in Greek history took place there, such as the naval battle of Paxos between the Greeks and the Illyrians in 229 BC. 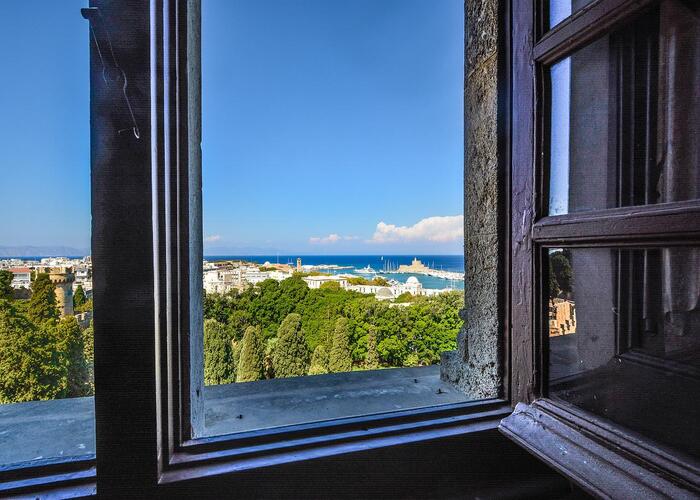 View of the sea - credits: pixabay.com

After Byzantine times, the island was continuously attacked by pirates, seized by Crusaders, and included in the Venetian rule in the 14th century. Paxoi were ceded to the rest of Greece in 1864, just like the rest of the Heptanese Islands.

By the time you reach Paxoi, you will find yourselves at the small port of Gaios, which according to tradition, took its name from the pupil of Apostle Paul, who introduced Christianity to the island.

Spare some time to stroll the picturesque village of Gaios with its characteristic Italianate architecture, common to this part of Greece. For those that want to take the next step, swimming on the small island of St. Nicholas is something you should definitely not miss. 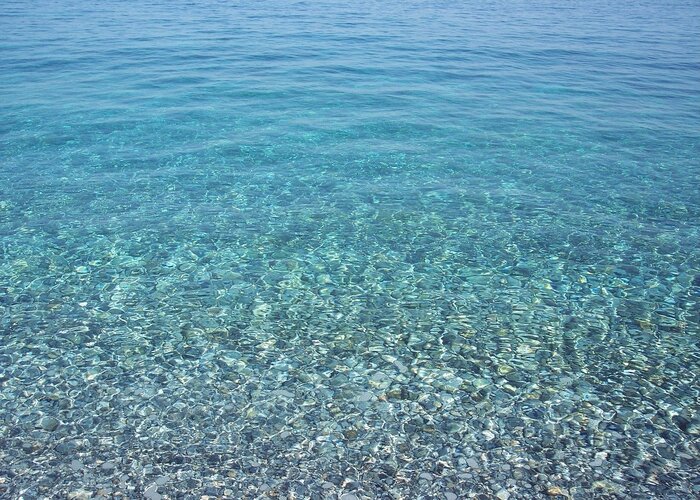 Just a short walk of 50 meters away from Gaios, the islet of St. Nicholas stands as the guardian of the port, ensuring its security. Appropriately, Paxians dedicated it to St. Nicholas, who, according to Christianity, is also the patron saint of sailors.

At the island's highest point, you will explore the castle of St. Nicholas, overlooking the port area. It was built by Adam San Ippolito in 1423 to protect the Paxians from pirate raids and the continuous attempts of the Ottoman fleet to control the island.

In 1814, the castle fell under the rule of the British Empire until the unification of the Heptanese to the New Greek State.

Within the port of Gaios, you will find the charming Museum of Paxoi, a neoclassical building hosting antiquities from prehistoric and classical times to historical manuscripts and artifacts of WWII.

Enjoy your stay at Paxoi, a densely forested island offering you the chance to swim in emerald waters, explore caves, hike to some spectacular locations, and lose track of time in the most relaxing environment.

Do not miss the chance to pay a visit to Antipaxos with its 20 inhabitants and enjoy some premium local wine brands close to the seaside. 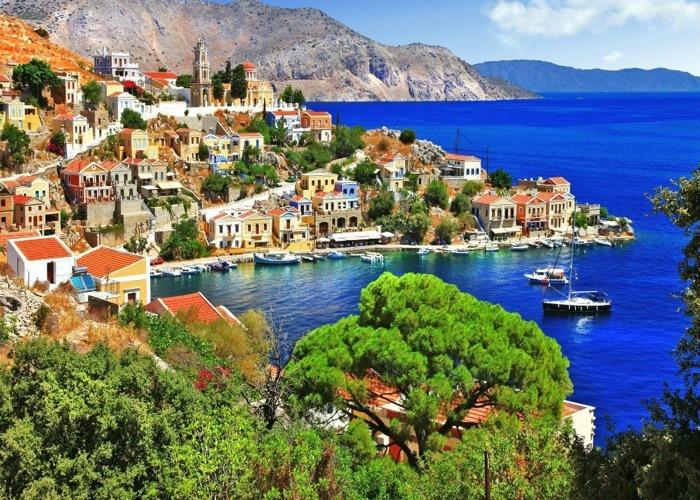 Symi or Syme is located in the southeastern part of Greece in the Aegean Sea, next to the island of Rhodes, less than 8 km away from the Turkish coast.

A jewel of the Dodecanese islands, Symi is thought to be the birthplace of Charites (Graces), the ancient Greek deities of charm, beauty, nature, human creativity, and fertility.

The island is accessible by ferry from the Piraeus port or the neighboring islands. Symi is surely a unique island in Greece with interesting architecture, stunning natural beauty, and wonderful beaches.

Arriving at the port of Gialos, you will witness firsthand the neoclassical architecture of the houses, painted with vivid colors, contributing to the particular aesthetic standards of Symi. 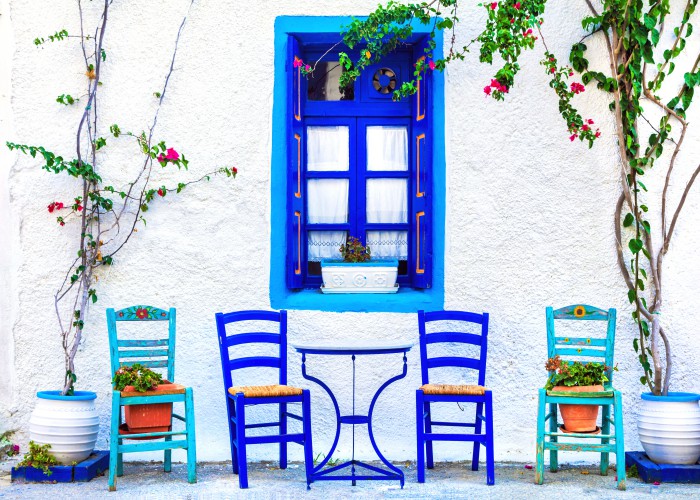 The economic boost of the 19th century with the formation of a middle class that surpassed in wealth even the neighboring Rhodes and the interest of the Symians in trading is evident throughout the island.

Large houses following the Neoclassical architectural trend, with influences from Marseille, Trieste, and Athens, are scattered throughout the port and the island's main settlements.

Do not miss the chance to visit the Castle of Symi just above the port. A fortified location since ancient times, today’s visible ruins come from the 15th century and the time of the Hospitallers Knights.

Nowadays, Symi proves to be an up-and-coming tourist destination that offers a unique summer experience. With the island's rich history, beautiful villages and towns, lots of activities for every traveler, and dozens of beaches for every taste, perhaps you should consider the island of the Graces as your next Greek destination. 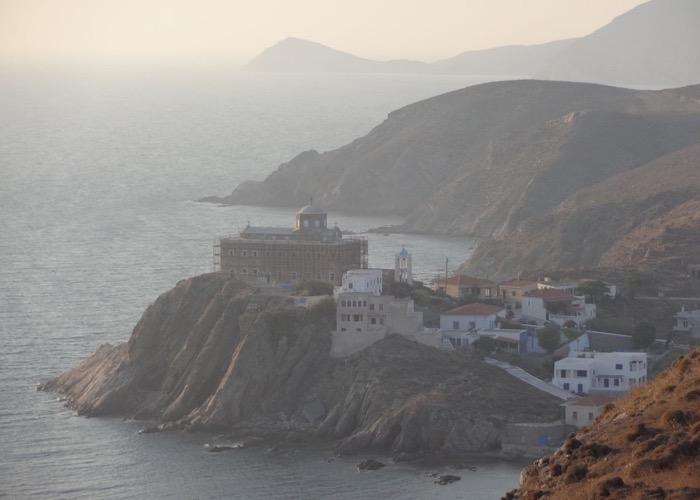 Some miles west of the island of Chios, there is the tiny island of Psara, a small island but with enormous significance for Greece.

Even a whole neighborhood of Athens, Psirri, is named after this small island. Inhabited since prehistoric times, life in Psara had its ups and downs until the 16th century when the Sultan of the Ottoman Empire, Suleiman II the Magnificent, changed everything.

He attacked and pillaged the island with his fleet, capturing and enslaving all the inhabitants of the island, resulting in its abandonment. He later on relocated Ottomans from different parts of the Empire to the island but quickly, Greeks from Thessaly, Epirus and Chios became the dominant ethnic group of Psara again.

During the 17th century, the last Ottoman landowners left Psara, making it again a Greek island. Its inhabitants were soon involved in really profitable activities of that time, mainly in trading. 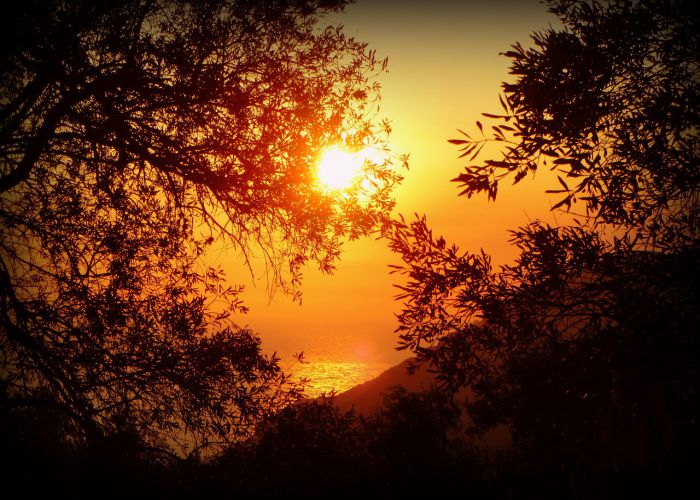 Many Psarians found their way to different courts of Europe, collecting money and creating a significant fortune and legacy. One of the most famous benefactors of the New Greek State was John Varvakis, originating from this tiny island and responsible for building the Central Market of Athens.

Despite its small size, the island contributed determinately during the War of Greek Independence in 1821. The inhabitants relied mostly on their naval power and experience to tackle the Ottoman fleet and army in many battles. One of the greatest heroes of the War of Independence, Konstantinos Kanaris, came from Psara, among many others.

In 1824, the island suffered from second total destruction by the Ottoman navy. Then, the protectors of the medieval castle courageously sacrificed themselves in the name of freedom.

Today, the island is a symbol of virtue and bravery, loved by its people and the rest of Greece. Do not miss the chance to visit Psara, dive into its history, realize its importance for modern Greek mentality and wander around its small picturesque town.

Psara is also an ideal destination for trekking lovers, those enjoying wild nature, and long-stretched beaches offering seclusion and tranquillity.

Choose to have a small trip around the island by a local boat, discover locations not accessible on foot and sail to the islet of Antipsara a few miles away. If you are looking for an unspoiled Greek island, Psara is your best bet. 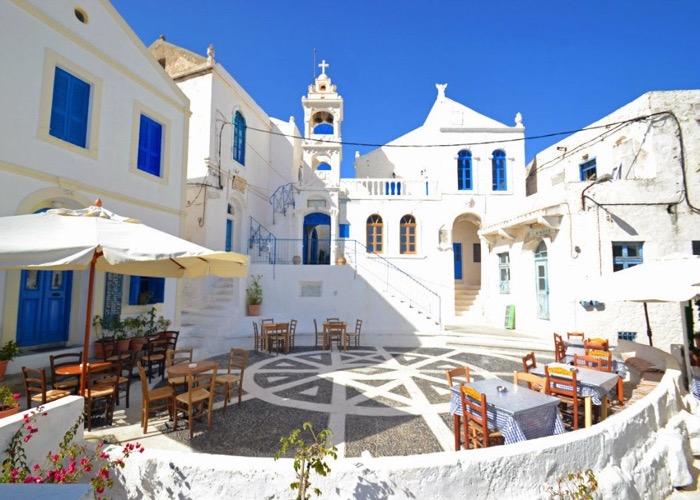 Located between the Greek islands of Kos and Tilos, the small circular island of Nisyros belongs to the Dodecanese islands region in the eastern part of Greece. Nisyros’ shape gives away its important feature. It is a volcano, still active, with a huge caldera of about three to four km wide.

According to ancient Greek mythology, Nisyros was formed after Poseidon, during the fight between the Olympian Gods and the Giants, cut off a piece of nearby Kos and threw it on giant Polybotes to prevent his escape. Homer also mentions the island in his Iliad, and it has had continuous habitation since antiquity. 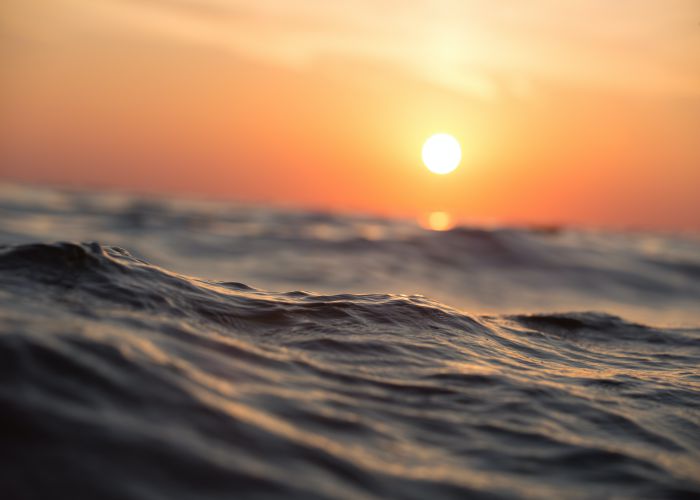 Reaching Nisyros is quite a task. During the summer months, there is a connection to the port of Piraeus, but the whole journey is gonna take you more than 12 hours.

The best way to get there is by plane to the nearby Greek islands of Kos or Rhodes and then hop on the ferry that will take you to this unspoiled destination. For those who want to meet the island's ancient past, a stop at the settlement of Mandraki is mandatory.

There you can find traces of the classical past of Nisyros and probe a bit deeper into the island’s history by visiting the small but wonderful archaeological museum. For nature-lovers, the volcano itself creates landscapes of unique beauty waiting for you to discover them.

There is a wide range of beaches as well, beautiful and secluded, offering you the chance to relax and feel the energy of the island. Do not waste more time and look for Nisyros island, an option that won’t let you down! 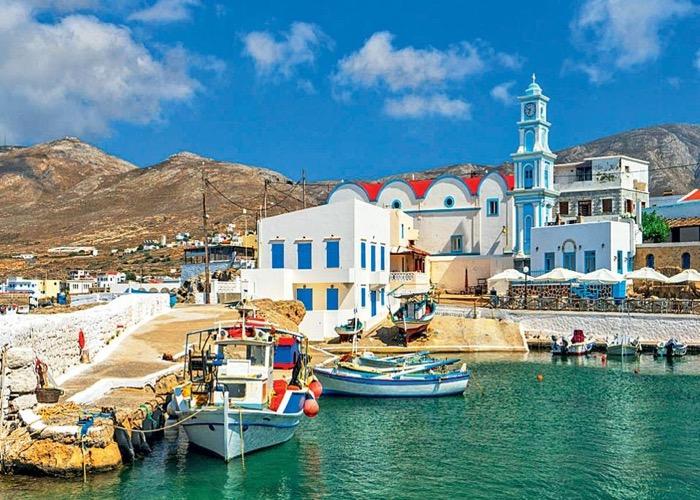 Kasos is definitely an untouched Greek island. It is the southernmost island of the Dodecanese region. Getting there is perhaps the hardest thing about your trip if you choose to take the ferry.

The journey will last approximately 24 hours if you start from the port of Piraeus. Luckily, the island has an airport, so taking the plane and reaching Kasos in an hour or so can prove to be a wise decision. In any case, a beautiful sandy beach will make it up to you. 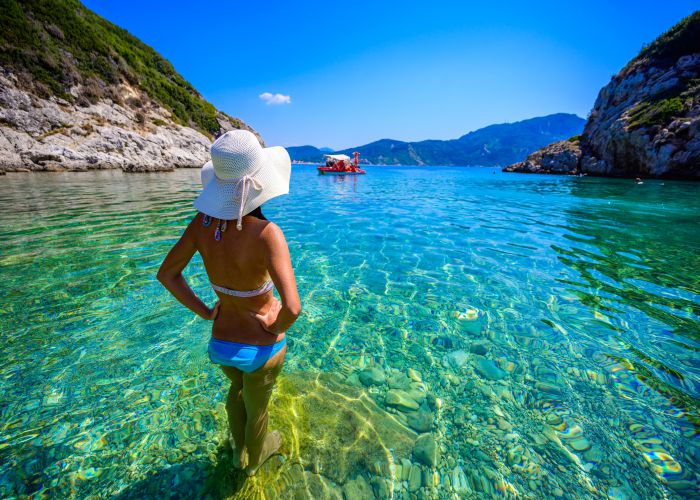 Kasos is unspoilt Greek island with incredible natural beauty, gorgeous sandy beaches, and whitewashed villages. There are five main settlements on the island, with the one of Polis and the port bearing the ancient ruins of the past.

If you choose Kasos as your summer destination, the island's numerous pristine and forgotten beaches promise you the rawest island experience you will ever get. Do not miss the chance to explore most of them, dive into the culture of Kasos and let this place forgotten in time enchant you with its mesmerizing, almost primitive beauty. 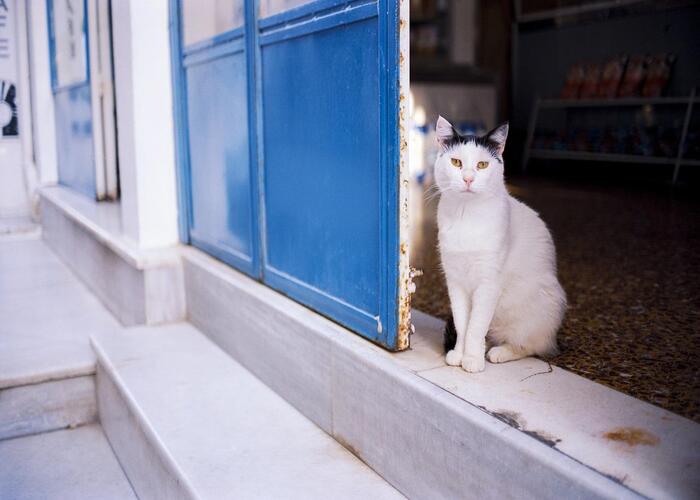 From the Ionian islands to the eastern borders of Greece to Turkey, the Greek seas are full of surprises that need more than a lifetime to meet them.

If you are looking for something quite different this summer, like a secluded Greek island, have a look at the choices listed above, plan your own trip to one of them, or check out our Greek Island Hopping guide.

More in this category: « Chios island: History & things to do || The Wild Beauty of Amorgos Island »
back to top