Naxos is an island that combines every good aspect of Greece. The long beaches and breathtaking landscape are captivating for everyone who visits it. However, the beauty of the largest island of the Cyclades is not limited to the striking beaches and the cosmopolitan part with Chora, the emblematic Portara, and the Venetian Castle.

The island is just as great for those who want to spend hours under an umbrella on a golden sandy Naxos beach and those who prefer to explore every inch of it. 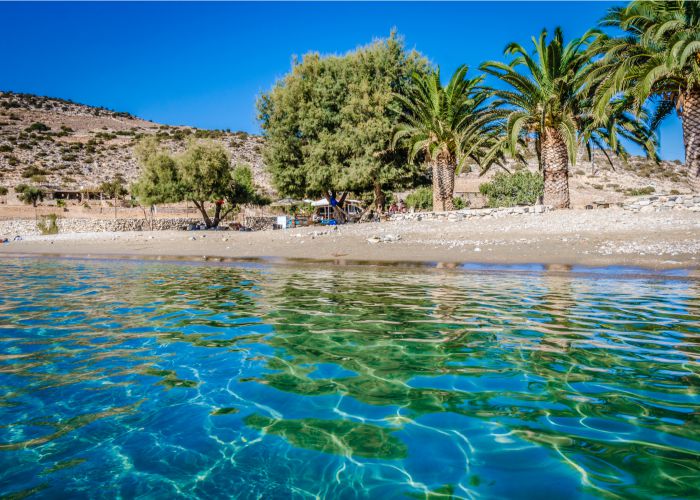 In the verdant hinterland of Naxos island, lush greenery, picturesque and peaceful traditional seaside, mountainous villages, labyrinthine alleys with arches, medieval towers, fascinating museums (with the archaeological museum and the folklore museum being our absolute favorites), and cool squares with plane trees and traditional cafes await visitors who want to discover the authentic side of the island. Touring these settlements is an experience not to be missed.

Here are the most beautiful Naxos villages to explore during your visit to the majestic island! 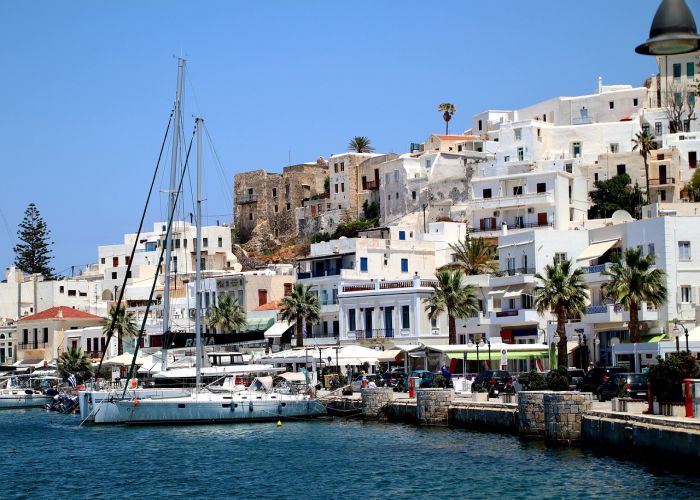 At a distance of 30 km from Naxos Town, one of the oldest and largest mountain settlements in the northwestern part of the island can be found.

Koronos, built at an altitude of 500-600 meters on the slopes of a deep green valley with springs that gush even during the summer, is one of the most famous Naxos villages, as before the war it experienced particular development due to emery mining.

Although in winter, the inhabitants living in the mountainous village are few, in the summer, its image changes with countless tourists visiting Koronos to experience the authentic greek island lifestyle it offers to its visitors. 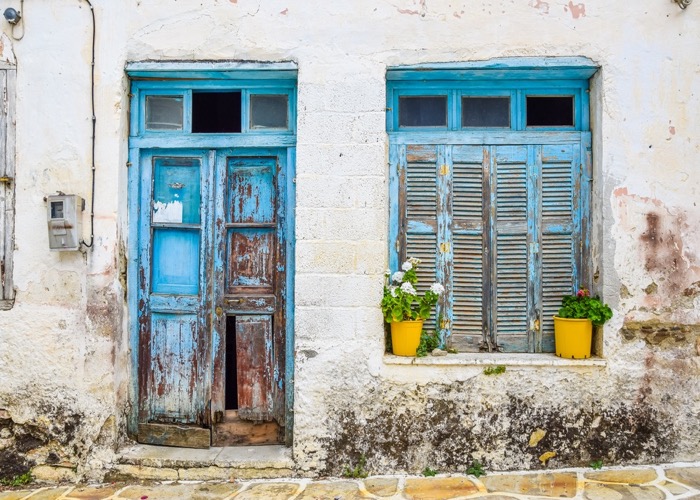 Just 17 kilometers from Naxos Town, surrounded by olive groves, Halki is the best travel in time on the Greek islands.

Its Venetian architecture is in no way reminiscent of the typical Cyclades since most of its buildings are well-preserved neoclassical buildings dating from the beginning of the last century. 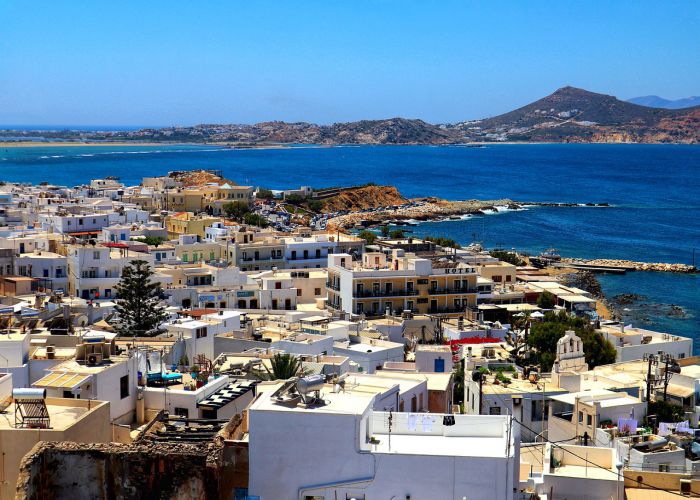 Small alleys, flowery courtyards, traditional cafes, and huge bougainvillea plants complete the tasteful setting. The feeling you get when exploring it is that time froze for Halki sometime between 1930 and 1940.

The well-known citrus leaf liqueur 'Kitron of Naxos from the 'Vallindra' distillery has been produced in Halki since 1896.

It is worth visiting Halki in the afternoon or early morning to enjoy your coffee and your dessert and let yourself take in the raw beauty of the village. A favorite spot is the cafe 'Caffe Greco' for its delicious coffee and handmade sweets. 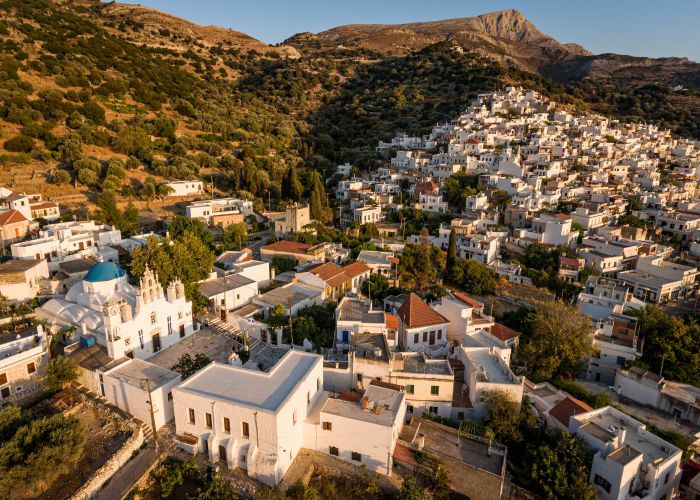 The traditional settlement is about 18 kilometers from Naxos Town. Its architecture may have some Cycladic elements but is quite different. The houses are characterized by their small inner courtyards, tiled roofs, and huge barred doors on which the date of their construction is engraved. 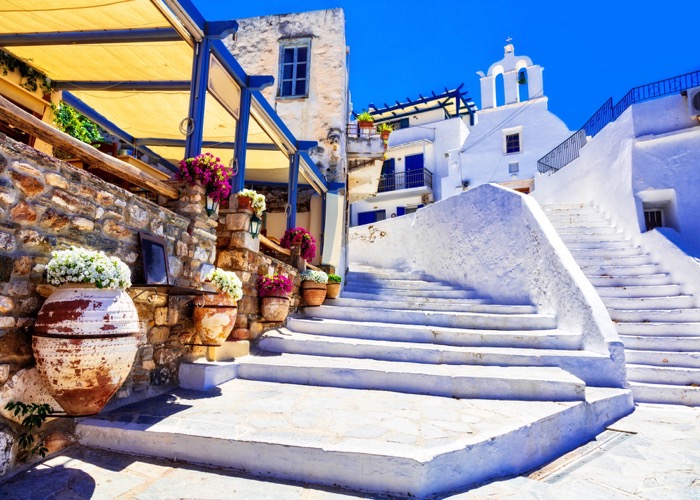 From the central square and the huge plane tree, the whitewashed alleys of the village stretch out in a labyrinthine and amphitheatrical manner. It is worth climbing them, going down them, taking pictures, and getting lost in them.

The village trademark is the church of Panagia (Virgin Mary) Filotissa, and it has been standing since 1710 on one of its highest points. 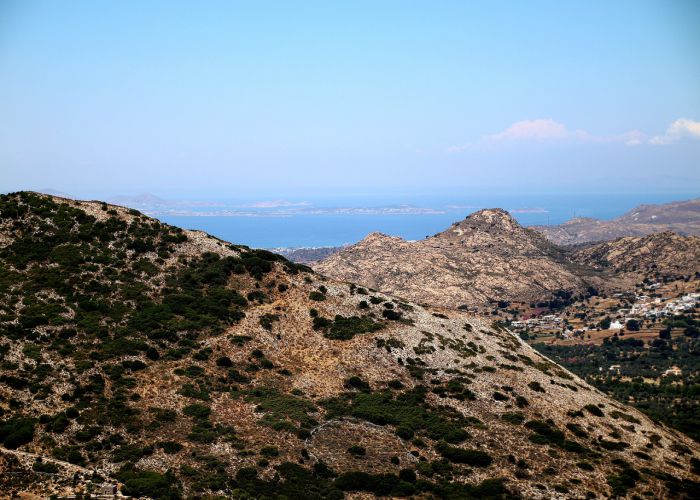 Kinidaros is located 15 kilometers from Naxos Town, close to the marble quarries, among oaks, olives, and plane trees.

The all-white mountainous village is exclusively built from local marble sparkles under the hot Cycladic sun. It is perhaps the only one of the mountain Naxos villages that will remind you a little more of the Cycladic architecture, with cobbled streets, whitewashed houses, and Byzantine churches with blue domes and colored windows.

In the village squares under the shade of acacia and cypress trees, neat cafes and restaurants perfectly harmonize with the environment. This is where the well-known Konitopoulai family comes from, who is a huge part of traditional music, specifically of the islanders. Perhaps this is also why Kinidaros is known for its feasts and festivals. 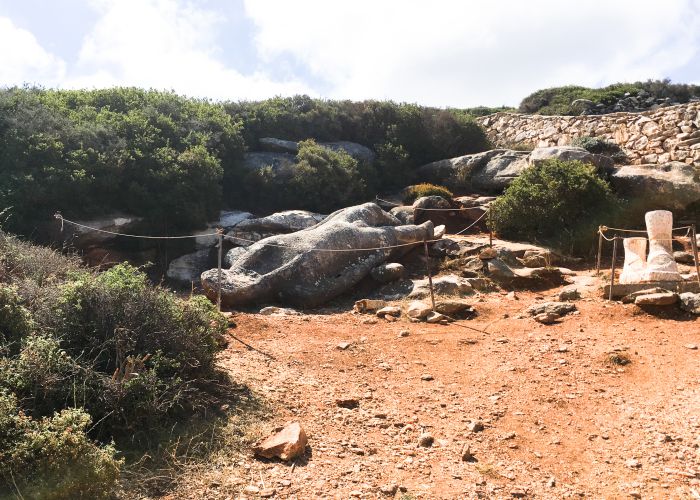 Built amphitheatrically on the slope of a meadow with rich vegetation, Melanes, which is about 8 km from Chora, is one of the oldest Naxos villages. The green of the trees and the old water mills attract the visitor's eye.

The excellent food you will taste in the taverns of the quaint village is one of the reasons that will bring you here. The other is the many important attractions located in the wider area.

The walk to the nearby location of Flerio is mandatory, where you will see one of the famous kouros of Naxos: the Kouros of Melanes, a work of the 6th century BC. Worthy monuments are also the ancient aqueduct, which transported the water from the springs of Flerio and Melani to the city of Naxos, as well as the sanctuary of the springs.

On the way to the small village of Potamia, in the Kalamitsia region, you will see the imposing, but now in ruins, Palace of the Jesuits (17th century), which was once the summer residence of the order of Jesuit monks.

Please note that between Melanes and Kourounochori, at the 'Demari' location, is the first motorized oil mill of Naxos. As far as food is concerned, you will come here for the famous roosters that are the village's specialty. 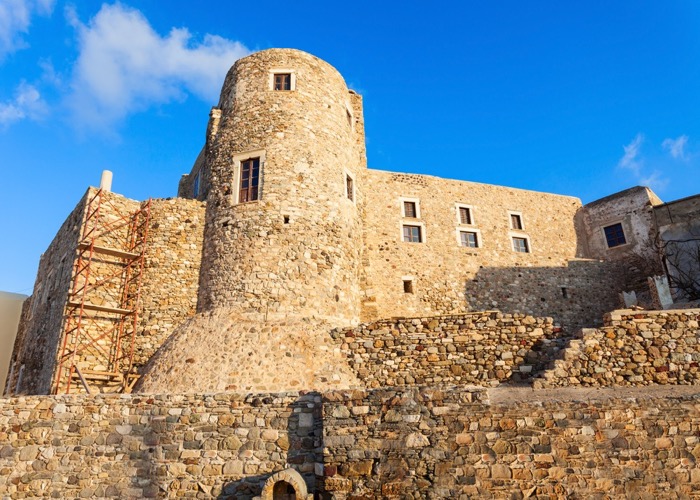 From the crossroads of the Cross (between Apeiranthos, Moni, and Koronos) at the bottom of the gorge, Keramoti can be seen. It is a settlement of about 80 houses, most of which are not inhabited today.

The village is built between three mountains, Koronos, Atraliki, and Vounos, and is lost in lush vegetation since it has running water even in summer.

Due to the abundance of water around the village, many watermills operated, but today only remains of the buildings remain. 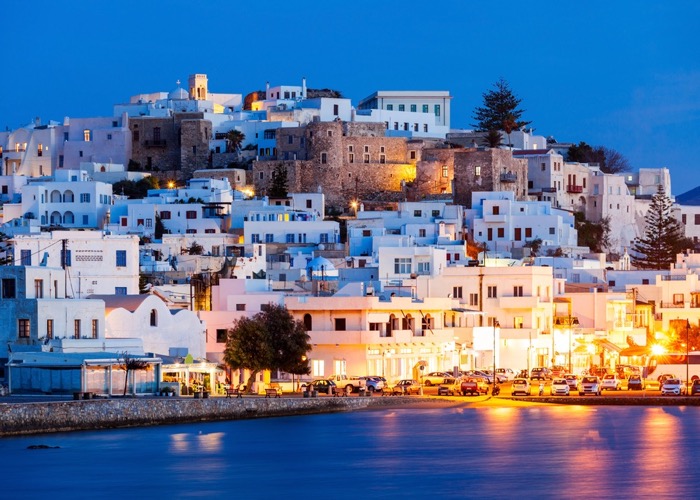 Apeiranthos is the second largest village on the island of Naxos and the most mountainous since it is perched at 640 meters above sea level. It is located 28 kilometers from Chora, surrounded by vineyards and orchards.

Marble cobblestones, which in several places are covered with arched arches, magnificent two-story mansions with small courtyards, and houses built into the mountain are just some of the essential elements of the village. As you wander around the village, you get the feeling that you are not in the Cyclades but in a mountain village of Crete. 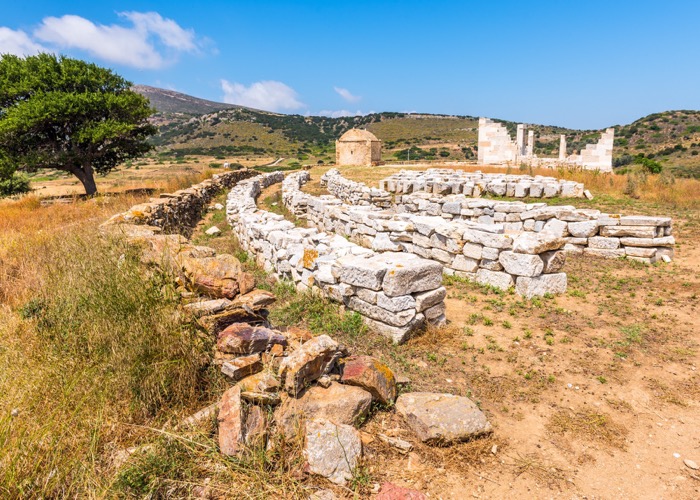 The legend says that soldiers from Knossos followed Ariadne, who was hiding in Apeiranthos after she disembarked from the ship of Theseus and eventually settled there. History has recorded that during the Frankish and Turkish times, many Sfakian rebels were expelled or fled to the village.

The truth lies somewhere between myth and historical fact, and over the years, the separation between them has become increasingly indiscernible. It is worth noting that the local dialect that you still use today is a combination of Ancient Greek and Byzantine.

The central square of the village is suitable for ouzo and meze dishes from noon until late afternoon under the shade of the century-old plane trees. 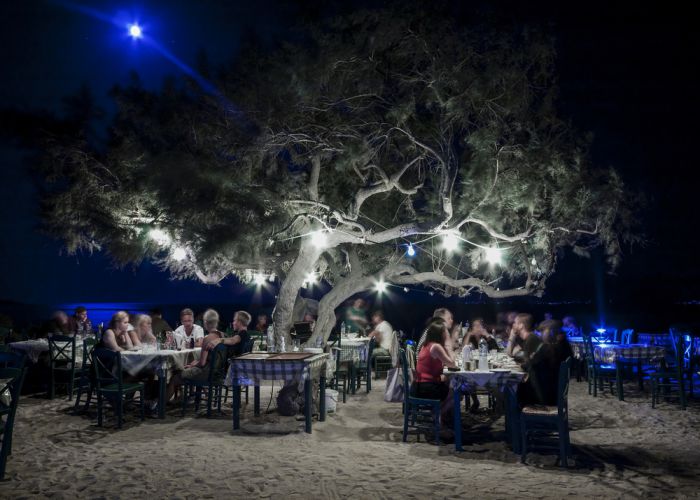 Agia Anna has a unique attraction close to the popular coastal resort of Naxos island. The small village of Agia Anna is just about 6 km from Naxos Chora and covers much of the tourism demand in the region.

In Agia Anna, any desire for luxury can come true, and the perfect atmosphere can remain. If you visit it, you won't be surprised that the finest hotels in Naxos have been developed at Agia Anna. 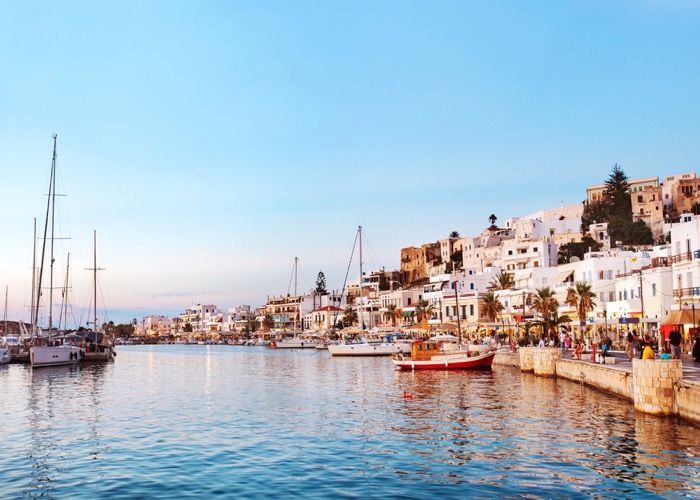 Eggares is a small village on the northwest side of the island, built on a green plain at a distance of 7 km from Naxos Town. Famous Greek writer Nikos Kazantzakis, who spent his summers here, calls Egares an 'earthly paradise' in his work 'Reference to Greco.'

The heart of the village beats in the large stone square, where the Church of the Assumption dominates. The settlement is crossed by two rivers.

Important attractions of the traditional village are the Tower of Foufopoulos, in the now-abandoned 'Mesa Geitonia' settlement, the seven preserved water mills, and the two restored olive mills.

When the walk and fresh air work up your appetite, return to the picturesque square for its traditional coffee shops and home-cooked food in the taverns. 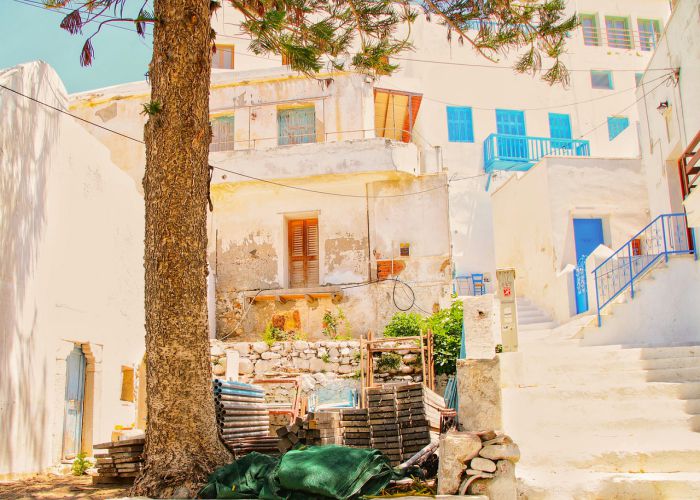 The walks in these two neighboring picturesque villages, which are only 5 km from Naxos Town, reveal images of quiet and simple beauty with scattered chapels, Venetian towers, abandoned settlements, and panoramic views of Naxos Town.

A small and homely village, the amphitheatrically built Galanado has a wonderful view towards the plain of Livadi, Stelida, and Chora. There is the parish church of the Holy Spirit. On the south side of the settlement dominates the private Venetian Tower of Belonia with the two-aisled church of Agios Ioannis, which is both Catholic and Orthodox.

Glinado, on the other hand, stands out for the endless view it offers to all sides of the horizon. The mill of Karegla and the chapel of Tzannakos are ideal spots to enjoy the sunset. A walk through the abandoned settlements of Louloudos and Titzamos will lead you to the church of Christ. 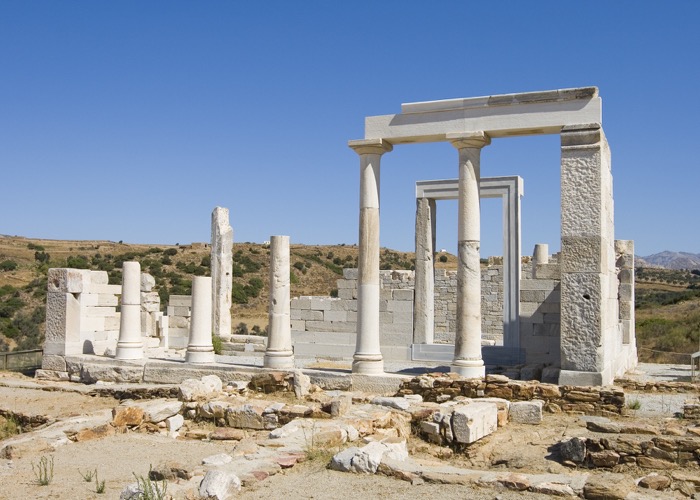 The Temple of Demeter - credits: Kuiper/Shutterstock.com

Moutsouna, approximately 37 km from Chora, is the largest settlement on the eastern coast of Naxos, but also the natural port from which emery was transported in the past.

A winding, downhill paved road will lead you from Apeiranthos to this picturesque seaside settlement, with a few fish taverns next to a quiet sandy beach.

Important attractions in the village are the old installations of the aerial railway, which until the 1970s, transported the emery from its mining galleries to the loading ramp at the port of Moutsouna.

Starting from Moutsouna, you can discover the eastern and southeastern coasts of Naxos, as well as the mountainous hinterland of the island. 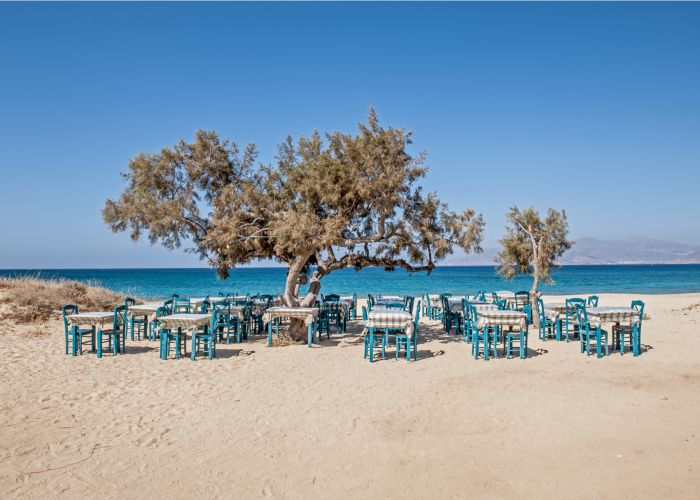 A small harbor and the impressive statue of Kouros will bring you to this small fishing village located on the northeastern coast of Naxos, 36 km from the island's capital.

With several hotels, rooms for rent, cafes, bars, and restaurants, Apollonas has shown great development over the last few years and has become quite the tourist spot on the island.

Before going down to the village, you will see one of the three famous 'Kouros of Naxos.' It is an oversized marble statue of the 6th century BC, about 10 m high, lying half-finished on the ground. It is located in Kastraki, above the settlement. According to archaeologists, it depicts the god Dionysus or the god Apollo.

Blessed with natural beauty many have never seen, characterized by rolling hills, green valleys, and imposing gorges, Naxos island has beautiful villages with authentic character. Some of them nestle into olive trees, and some in the mountains.

All villages of Naxos offer unique experiences that are captivating and almost addictive. These traditional villages of Naxos, however, are our top picks that merit your visit. This is your chance to explore them!

More in this category: « Highlights Guide to Lesvos Island || Naxos Food Guide; A Dive Into Greek Island Gastronomy »
back to top